Scientists Believed This Giant Tortoise Was Vegetarian, Then Filmed It Hunting a Tern Chick 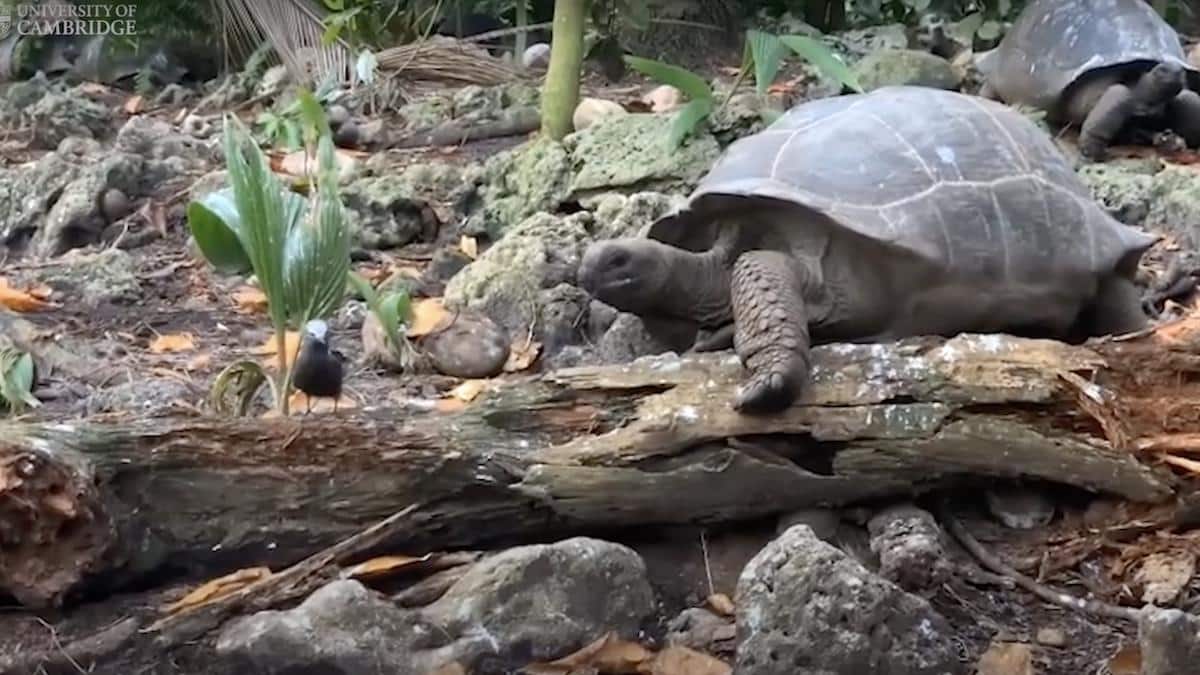 Researchers have caught an extraordinary event on camera: a Seychelles giant tortoise killing and eating a tern chick.

The incident, documented in the journal Current Biology Monday, is so surprising because tortoises are generally assumed to be vegetarians.

“This is completely unexpected behaviour and has never been seen before in wild tortoises,” study leader Dr. Justin Gerlach, director of studies at Peterhouse, Cambridge and affiliated researcher at the University of Cambridge’s Museum of Zoology, said in a Cambridge press release.

The video shows the tortoise slowly stalking the tern chick towards the edge of a log before extending its neck and biting its head.

“The giant tortoise pursued the tern chick along a log, finally killing the chick and eating it,” Gerlach told Cambridge. “It was a very slow encounter, with the tortoise moving at its normal, slow walking pace – the whole interaction took seven minutes and was quite horrifying.”

The tortoise is one of around 3,000 tortoises who live on Frégate Island in the Seychelles. Land tortoises are thought to be “strict herbivores,” according to the study authors. They consume up to 11 percent of the vegetation on the Seychelles and Galápagos island chains, and their plant eating makes them important ecosystem engineers as they spread seeds and alter vegetation.

However, in July of 2020 Frégate Island conservation manager Anna Zora, who is also a study co-author, noticed a female tortoise acting in an unusual way.

“When I saw the tortoise moving in a strange way I sat and watched, and when I realised what it was doing I started filming,” she told Cambridge.

Tortoises have been known to eat carrion, as well as bones and shells for calcium, but they have never been observed hunting in the wild before. However, they would likely hunt for the same reason they would eat carrion: to get extra protein and other minerals.

“It takes quite a bit of energy to extract the necessary resources from a vegetarian diet, particularly if you’re trying to build egg shells or you’re trying to deposit yolk,” University of Canberra reptile ecologist professor Arthur Georges, who was not involved in the study, told Australia’s ABC News.

There is evidence that other tortoises on the island have made similar attacks, the study authors noted. And Gerlach told Cell Press that the tortoise looked like it knew what it was doing when it captured the tern, signaling it had hunted before. While it is still unclear how widespread tortoise hunting really is on the island, Gerlach thinks the new behavior could have evolved on Frégate Island in particular in response to conservation efforts that have given rise to both high turtle and tern populations.

The hunting is not likely to threaten tern conservation, he further told CNN.