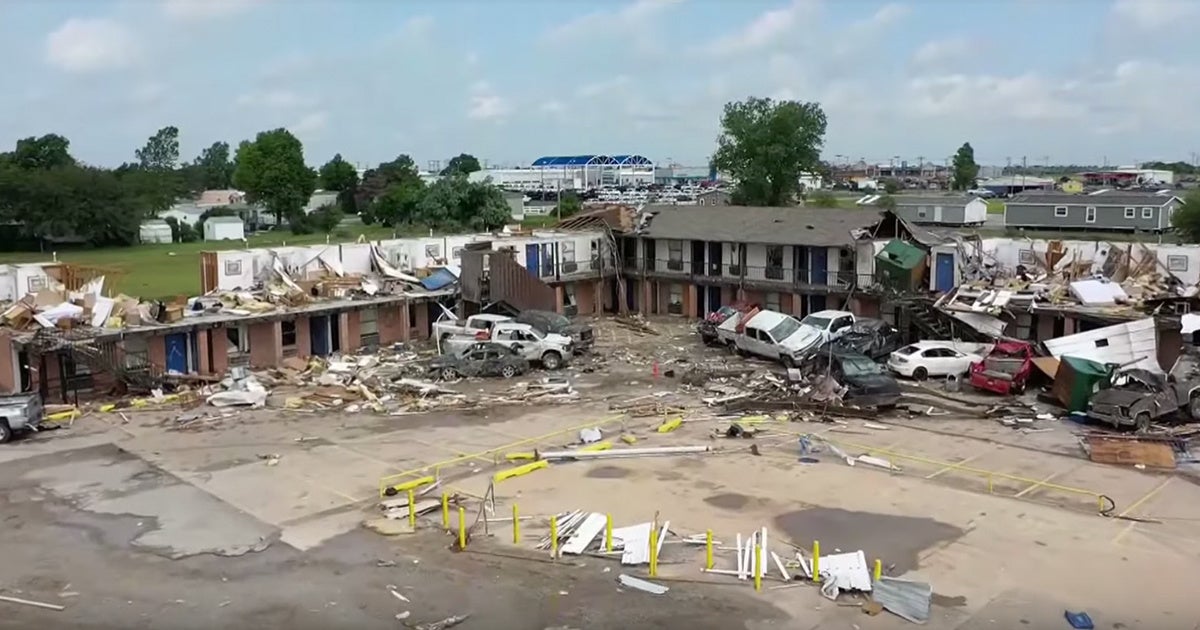 A tornado in the Oklahoma City suburb of El Reno left at least two people dead after it flattened a motel and caused widespread damage to a mobile home park on May 25. CBC News / YouTube screenshot

As the death toll in Oklahoma rose to six Monday amid an outbreak of nearly 200 tornadoes across the Midwest in recent days — as well as in areas far less accustomed to them — climate scientists said such patterns may carry warnings about the climate crisis and its many implications for extreme weather events.

In Oklahoma, tornadoes touched down in at least two cities, including El Reno and Sapulpa, over the weekend, injuring dozens and leveling a number of homes. The tornado that hit El Reno, a suburb of Oklahoma City, was given an EF3 rating, with wind speeds up to 165 miles per hour. Only about five percent of tornadoes are given an EF3 rating or higher.

The tornadoes hit after much of the state endured severe flooding last week, following powerful storms that overflowed the Arkansas River and damaged about 1,000 homes.

Outside the Midwest, at least one twister touched down near Washington, DC, with reports of tornadoes in Texas and Colorado, and Chicago facing a tornado watch on Monday.

While tornadoes have long been a fixture in the Midwest, meteorologist Eric Holthaus tweeted last week that there is “reason to believe major outbreak days … are getting worse,” while climate scientists are examining links between the storms and the climate crisis.

The so-called “Tornado Alley,” which covers parts of Texas and Kansas as well as Oklahoma, appears to be growing, according to a study published in Nature last year — making tornadoes more frequent in states that rarely saw them previously including Arkansas, Mississippi and eastern Missouri.

“What all the studies have shown is that this particular part of the U.S. has been having more tornado activity and more tornado outbreaks than it has had in decades before,” Mike Tippett, a mathematician who studies the climate at Columbia University told PBS Newshour earlier this year.

As the Kansas City Star reported on Sunday, scientists believe the warming of the globe — fueled by human activities like fossil fuel extraction — is contributing to higher amounts of water vapor in the atmosphere, causing heavier rainfalls which can spawn tornadoes.

The increase in destructive tornadoes across wider swaths of the country than in previous decades “may be suggestive of climate change effects,” Purdue University researcher Ernest Agee told the Star.

And the unusual occurrence of tornadoes in far more densely-populated areas than those that frequently see such weather events has led to concerns that tornadoes will become more deadly and destructive than they’ve been in the past.

“We get caught up on the climate aspect, but the real issue going forward with tornadoes — and hail storms and hurricanes and insert your favorite natural disaster — is the fact that we have more human exposure,” Victor Gensini, lead author of the study that appeared in Nature, told Pacific Standard in March.