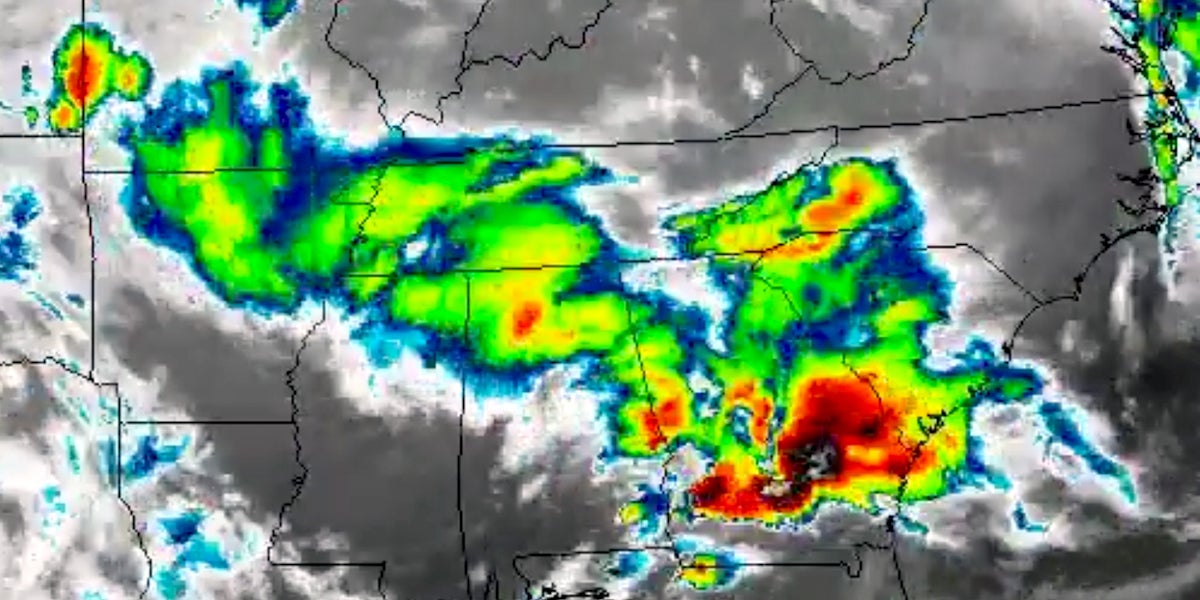 After the least-deadly year for U.S. tornadoes in three decades, 2017 is off to a troublesome start. At least 19 people died over the weekend in two consecutive nights of tornadoes across the Deep South, compared to the total of 17 fatalities recorded for the entire year of 2016. Although midwinter outbreaks don’t happen every year in the U.S., they’re most likely to be across the South when they do occur. Many of the deadliest tornadoes in these outbreaks happen overnight, when residents may be caught asleep or otherwise unaware and when getting to shelter can be difficult. The high proportion of manufactured/mobile homes across the South adds to the vulnerability of residents. 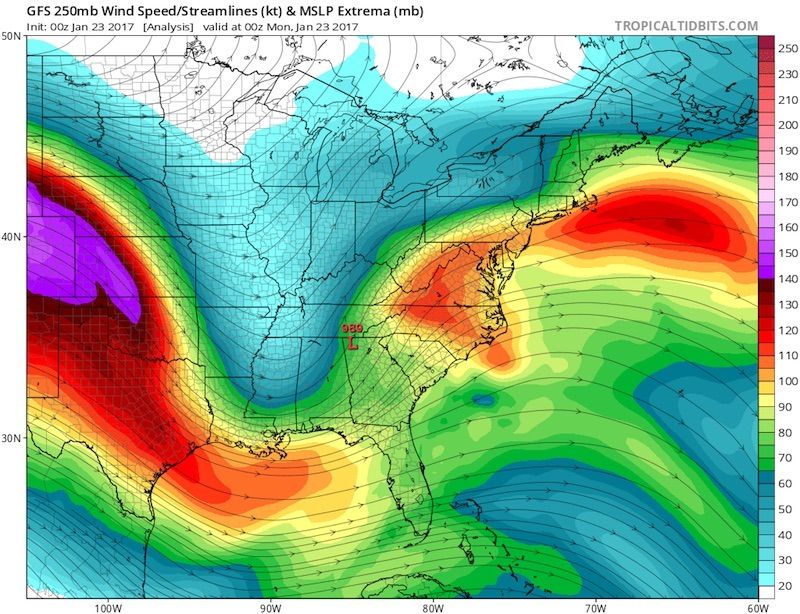 This past weekend’s activity was fed by a powerful disturbance rolling through the polar jet stream atop very sultry air for midwinter at ground level. Jacksonville, Florida, set a record high of 84 F on Saturday and air with dew points well above 70 F streamed onshore through the weekend.

The severe weather occurred in three distinct rounds, as shown in the satellite loop embedded at bottom.

A pre-dawn supercell tore across southeast Mississippi and southwest Alabama early Saturday. Five tornadoes were reported. The most extensive damage occurred in and near Hattiesburg, Mississippi, around 4:00 a.m. CST by a long-track tornado (31 miles), a half-mile wide at its peak, that was rated EF3 on the enhanced Fujita intensity scale. This tornado produced 4 deaths and 56 injuries, according to the National Weather Service office in Jackson, Mississippi. Insured damages are likely to top $200 million in Hattiesburg alone, Insurance Commissioner Mike Chaney said. Just four years ago, on Feb. 10, 2013, Hattiesburg was extensively damaged by an EF4 twister that caused more than 80 injuries in two counties.

A wide shot of all the homes damaged looking towards Edwards Street in downtown Hattiesburg. pic.twitter.com/elmJ2hA10c

A more extended, widespread round of 31 tornadoes occurred from midday Saturday into Sunday morning. The main culprits were two long-lived supercell storms, the first of which rolled from extreme eastern Alabama across central Georgia to extreme western South Carolina from about 10 a.m. to 4 p.m. EST. The second supercell tore across southern Georgia after midnight. Eight people were killed when a tornado ripped through a mobile home park southeast of Adel, Georgia, around 3:45 a.m. EST Sunday. Two others died in the same storm a few minutes later.

Conditions became increasingly volatile by midday Sunday, leading the National Oceanic and Atmospheric Administration (NOAA) Storm Prediction Center to issue a rare “high risk” outlook (its first anywhere since 2014) for parts of southeast Georgia and northern Florida. Instability was more than adequate for severe weather and wind shear was at extreme levels, with very high storm helicity (the amount of rotation imparted to a storm by winds at various levels). By early afternoon, thunderstorms were sweeping from the Gulf of Mexico into the Florida Panhandle with well-developed rotation evident on radar, a rare occurrence along this coast. The worst storm of the day produced a tornado that ravaged a mobile home park in Albany, Georgia, killing at least 4 people.

The afternoon’s other thunderstorms developed so quickly and vigorously that they competed with each other, reducing the odds that another long-lived tornadic supercell would emerge. Four other tornadoes were reported on Sunday afternoon and evening, but none of them produced widespread destruction. 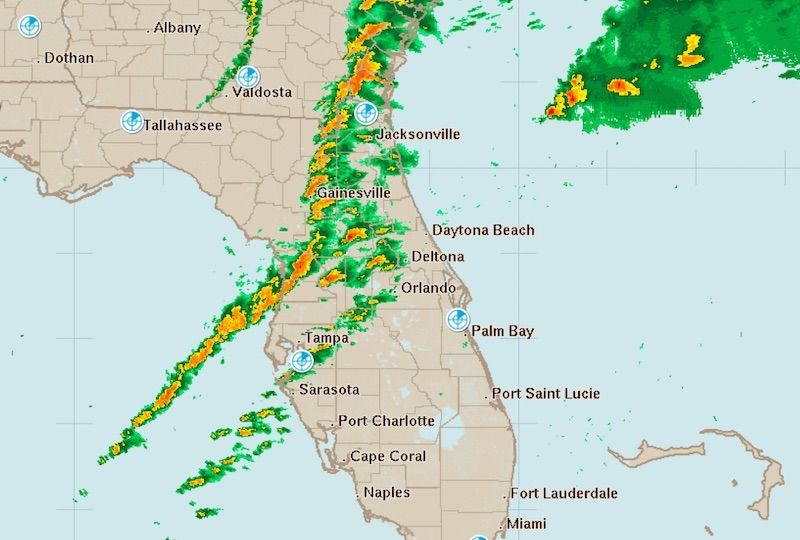 A Noteworthy January for Tornadoes

All told, NOAA/SPC logged more than 40 tornado reports from early Saturday through early Monday, scattered from western Louisiana to far southeast Georgia. Loosely speaking, this whole event might be considered a single outbreak, since it emerged from the same overall weather pattern. However, experts often define an outbreak as a string of tornadoes with no more than six hours of tornado-free conditions. By that standard, we could label the early-Sunday tornadoes (round #2 above) as an “outbreak” and all three periods above as a “sequence.”

Only a few Januarys since 1950 have produced outbreaks or sequences topping this one, according to a compilation from ustornadoes.com. The reigning champion is the outbreak of Jan. 21-23, 1999, which led to nine deaths and produced 129 tornadoes from east Texas to southern Illinois. There was one F4 tornado in that event in far northeast Arkansas and 11 other tornadoes were given F3 ratings on the original Fujita tornado intensity scale that was in use at the time.

The nation’s deadliest individual tornadoes on record in January, as noted by weather.com, were two Arkansas twisters that each led to 55 fatalities: one in Fort Smith on Jan. 11, 1898 and the other in Warren on Jan. 3, 1949.

Echoes of Another El-Niño-to-La-Niña Winter

Through early Monday, the Storm Prediction Center had logged a total of 91 preliminary tornado reports for the month so far. The upcoming pattern will be much less conducive to severe weather throughout the week and perhaps all the way to the end of the month. Even so, if all or most of these reports are confirmed, this could end up as the second most active January for tornadoes since comprehensive records began in 1950, according to ustornadoes.com. The clear record-holder is January 1999, when a total of 212 tornadoes were notched.

Interestingly, the twister-packed January of 1999 occurred during a moderately strong La Niña event that was in place one year after the record-setting 1997-98 El Niño event. Similarly, we’re now one year past the comparably strong 2015-16 El Niño event and again experiencing La Niña, albeit a weak one. The only other “super El Niño” on par with these was in 1982-83; the following January of 1984 was very quiet tornado-wise, with only one confirmed twister. That year as a whole was quite active, though, with a devastating tornado outbreak in the Carolinas on March 28, 1984, killing 57 people and injuring more than 1000. In general, La Niña years appear to be a bit more favorable than El Niño years for early-spring tornado outbreaks, but this applies mainly to La Niña events that are at least moderately strong, which the current one isn’t. Recent work led by John Allen (now at Central Michigan University) has bolstered the idea that La Niña is more favorable than El Niño for springtime hailstorms and tornadoes.