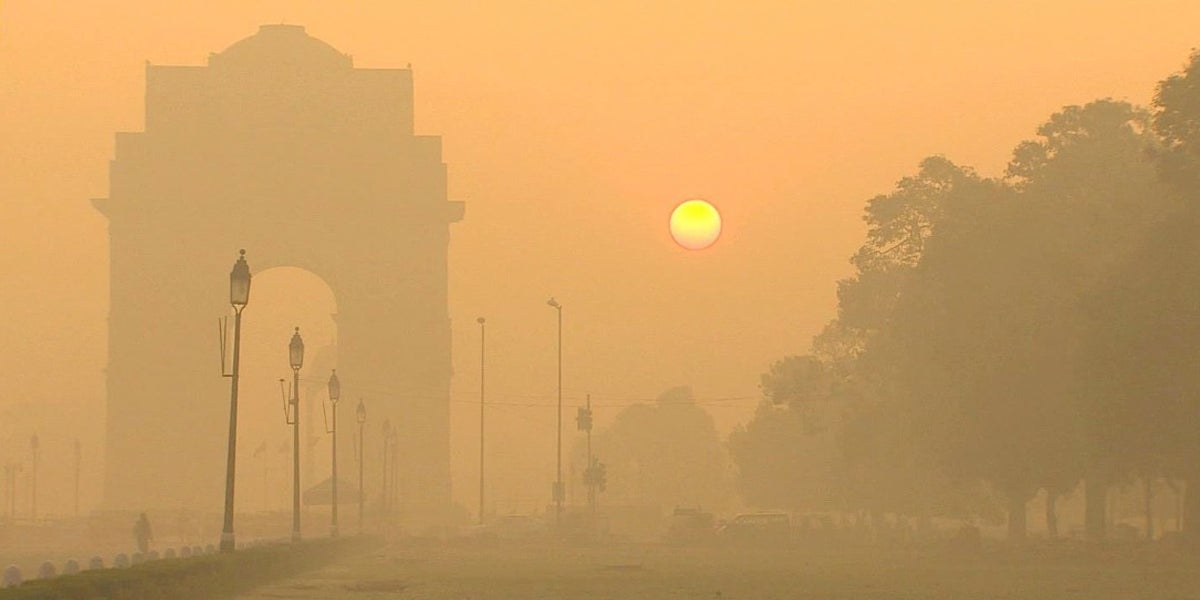 The top weather story of 2016: Earth had its warmest year on record (again)! While the final numbers are not officially tabulated, 2016 appears certain to be the warmest year in every major dataset scientists use to track global warmth.

The previous warmest year on record for Earth’s surface was set in 2015, which in turn broke the record set in 2014. The three-year string of warmest years on record is the first time such an event has happened since record keeping began in 1880. One official record has already been announced: Earth’s warmest year in the 38-year satellite-measured lower atmosphere temperature record was 2016, beating a record had stood since 1998, according to the University of Alabama-Huntsville.

The first seven months of 2016 all set new monthly records for global heat in the the National Oceanic and Atmospheric Administration (NOAA) database, giving the planet an unprecedented streak of 15 consecutive record-warm months. February 2016 had the warmest departure from average of month in recorded history and July 2016 was the warmest month in recorded history in absolute terms.

According to the World Meteorological Organization (WMO), 2016’s global temperatures were approximately 1.2 C above pre-industrial levels. About 0.2 C of this warming was due to the strong El Niño event that ended in May 2016 and the remainder was due to the long-term warming of the planet from human-caused emissions of heat-trapping gases like carbon dioxide. Assuming that all nations who agreed to the Paris climate accord in 2015 fulfill their pledges, Earth is on track to see 2.3 C of warming over pre-industrial levels by 2050. This is above the “dangerous” 2 C level of warming considered likely to greatly increase the risk of hunger, thirst, disease, refugees and war. 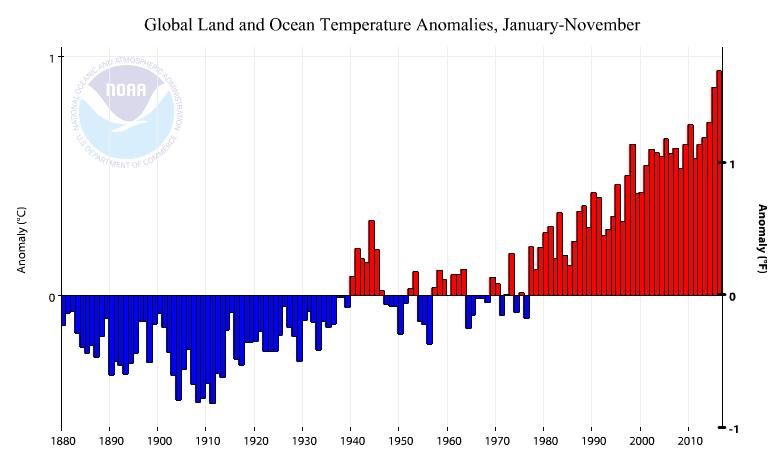 Figure 1. Departure of the global surface temperature from average for the period January—November, for all years from 1880 to 2016. The year 2016 will easily beat 2015 as the warmest year on record. NOAA

The deadliest and costliest weather events of 2016 were very likely high pressure systems with light winds and stagnant air that led to lethal build-ups of dangerous air pollutants in Asia. One such event, a severe air pollution episode being called the Great Smog of Delhi, hit the most polluted major city in the world—New Delhi, India—on Nov. 1 – 9, 2016. On Nov. 7, Delhi’s levels of the deadliest air pollutant—fine particulate matter (PM 2.5)—hit 999 micrograms per cubic meter, which is 40 times higher than the World Health Organization guideline of 25 micrograms per cubic meter for a 24-hour period. Sustained breathing of air pollution at these levels is like smoking more than two packs of cigarettes per day.

The worst air pollution episode of 2016 in China occurred the week of Dec. 19 when levels of fine particle pollution in Shijiazhuang, capital of northern Hebei province, hit 1,000 micrograms per cubic meter—40 times the WHO standard. According to mashable.com, more than 200 flights were cancelled in Beijing due to smog that week, schools and factories were ordered shut, and 23 cities declared smog red alerts.

Too often, we hear about the costs of air pollution regulations, but nothing on the savings in lives and money that result from breathing clean air. Part of the problem is that quantifying the deaths and damage due to air pollution episodes is difficult. However, there are more than 2,000 peer-reviewed scientific studies linking air pollution to “premature deaths”—mortality caused by air pollution that is only partly attributable to breathing bad air, but that would not have occurred otherwise.

The World Bank estimated in 2016 that premature deaths due to air pollution in 2013 (the most recent year statistics were available) were 5.5 million people, at a cost of more than $5 trillion. The total costs to countries in East and South Asia related to air pollution mortality were about 7.5 percent of GDP, they estimated. Additional health care costs to people who did not die were not considered and neither was pollution damage done to agriculture. Computer modeling by Stanford professor Mark Jacobson in 2016 predicted that the total cost of air pollution globally under a business-as-usual emissions path will reach $23 trillion per year (7.6 percent of global GDP) by 2050. 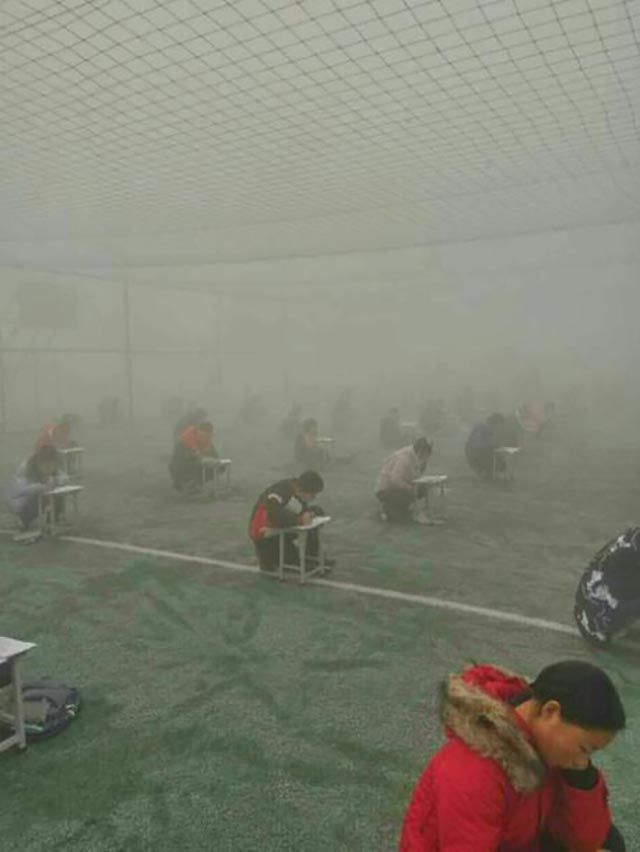 Figure 2: Students took exams in an outdoor playground on Dec. 19, 2016 in heavy smog at Linzhou, Anyang, in Central China’s Henan Province. The fine particulate matter (PM 2.5) levels were in excess of 500 micrograms per cubic meter, which is 20 times higher than the World Health Organization guideline of 25 micrograms per cubic meter for a 24-hour period. The principal of the school was suspended after a public outcry.

Earth’s third global coral bleaching event on record began in mid-2014, according to NOAA and by mid-2016 had become the longest on record. The beaching event hit Australia’s Great Barrier Reef particularly hard, causing its greatest coral die-off ever observed.

The Great Barrier Reef has suffered the worst coral die-off on record, according to new reports: https://t.co/0NMsKqlu6W via @EcoWatch

About two-thirds of the shallow-water coral on the reef’s previously pristine, 430-mile northern stretch died. The only thing that saved the southern portion of the 1,400-mile long reef was the passage of Tropical Cyclone Winston, which churned up the waters and cooled water temperatures by up to 3 C. The bleaching event was due to widespread ocean warming related to long-term climate change, as well as regional warmings triggered by a strong El Niño that began in early 2015.

The prolonged nature of the bleaching event caused multiple years of damage during seasonal peaks in upper-ocean temperature, giving the reefs less time to recover, and the bleaching event is expected to continue into April of 2017, according to the latest four-month forecast from NOAA’s Coral Reef Watch. The alert level is lower in 2017 than it was in 2015 and 2016, though, thanks to the modest cooling of ocean waters in the Pacific due to the demise of the record-strength El Niño that had been in place. However, Dr. Mark Eakin, coordinator of NOAA’s Coral Reef Watch, said that “so many corals are pre-stressed that this could be enough to push more over the edge.”

4. Drought Losses Low in the U.S., but Disturbingly High Globally

For the first year since 2011, losses from the multi-year drought in California in 2016 did not exceed $1 billion. There were no billion-dollar drought disasters in the U.S. in 2016, the first time that has occurred since 2010. However, drought losses globally were $17.6 billion in 2016, according to the November 2016 Catastrophe Report from insurance broker Aon Benfield. This ranked as the third highest economic loss due to drought in the past ten years, continuing a disturbing trend towards higher drought losses in recent years.

Here are Aon Benfiled’s list of drought damages globally since 2006:

The trend towards higher drought losses in recent years is concerning, since drought is the greatest threat we face from climate change. I predict that an extreme global warming-amplified drought is likely to cause a Great Climate Disruption to civilization sometime in the next 40 years. As I wrote in my April 2016 post, Food System Shock: Climate Change’s Greatest Threat to Civilization, I predict that the odds of climate change-amplified extreme weather events hitting multiple bread baskets where the majority of the world’s food supply is grown will increase to about a 2 percent chance per year by the middle of this century.

This means it is likely that sometime in the next 40 years we will see a significant disruption of the global economy, intense political turmoil, war and the threat of mass famine due to extreme weather, with a global warming-amplified drought likely being the key catalyst. If you think modern civilization cannot collapse due to drought, history suggests otherwise: see my March 2016 post, Ten Civilizations or Nations That Collapsed From Drought.

Earth’s official most expensive weather-related disaster of 2016—and the third most expensive non-U.S. weather-related disaster in world history—was the disastrous summer flooding in China’s Yangtze River basin. Torrential rains began in mid-May along the Mei-yu (or baiu) front, a semi-permanent feature that extends from eastern China across Taiwan into the Pacific south of Japan, associated with the southwest monsoon that pushes northward each spring and summer.

A number of studies have found that the Mei-yu rainfall tends to be particularly heavy in the summer following an El Niño event, as occurred in 2016—and occurred in 1998, the only year to experience a more damaging flood in China. Heavier Mei-yu rains are expected in a warming climate; in the 2015 book The Monsoons and Climate Change: Observations and Modeling, Hirokazu Endo (MRI) and Akio Kitoh (University of Tsukuba, Japan) concluded: “State-of-the-art climate models project that both the amount and intensity of Asian summer monsoon rainfall are likely to increase under global warming, and that the rates of increase will be higher than those in other monsoon regions.” 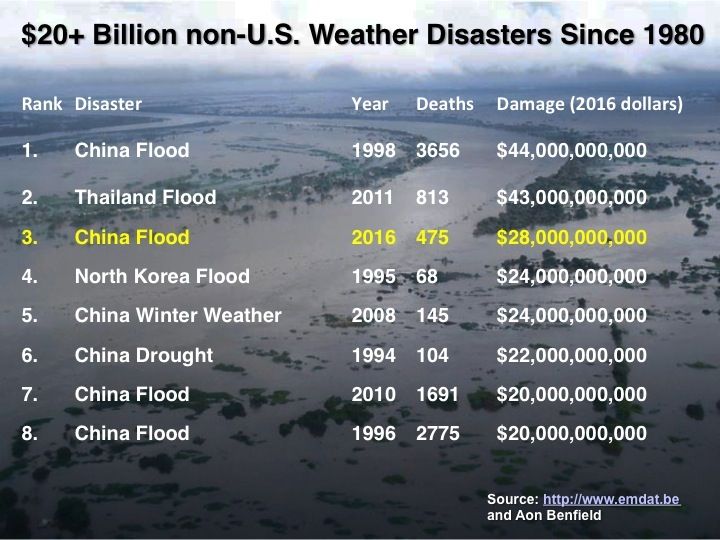 The 2016 Yangtze River floods in China would rank as the third most expensive weather-related natural disaster on record outside of the U.S., according to Aon Benfield and the International Disaster database, EM-DAT. 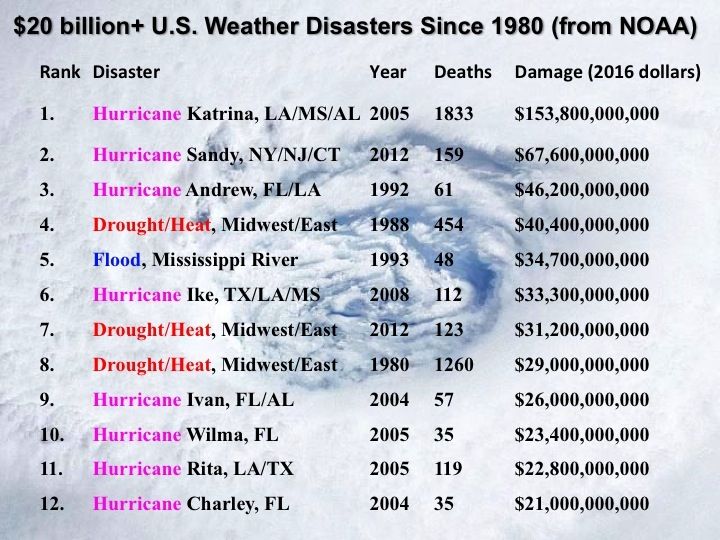 The U.S. has seen twelve weather-related disasters costing at least $20 billion, with eight of them more expensive than the 2016 Chinese floods.NOAA / NCEI

The remainder of the top 10 weather events of 2016 were all tropical cyclones. I discussed these five storms in a late-December post, Top Ten Tropical Cyclone Events of 2016 Potentially Influenced by Climate Change:

6. Hurricane Matthew in Haiti, the Bahamas and the Southeast U.S.