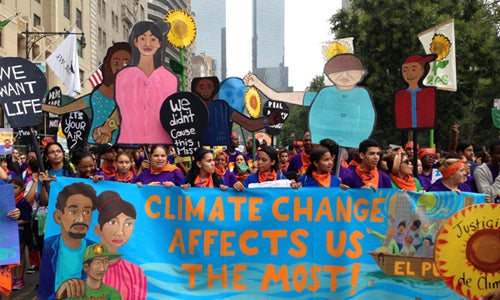 There is a lot to feel good about as far as the U.S. climate movement and what we accomplished in 2014. Without question, we are heading into 2015 with some wind at our back and, to continue the relevant metaphor, the sun to light our way forward.

In the order that I think were most important, here they are:

1. People’s Climate March, Sept. 21: How could anything else be more important than this? Hundreds of thousands of people demonstrated in New York City for action on climate, with many tens of thousands more around the U.S. and the world doing so in solidarity. Scores of constituencies were represented, from famous people to U.S. Senators to communities of color to trade unionists to a multi-faith religious contingent to tens of thousands of youth and so many more. Nearly everyone involved had positive things to say about it afterwards. And the next day, thousands took nonviolent direct action as part of Flood Wall Street. 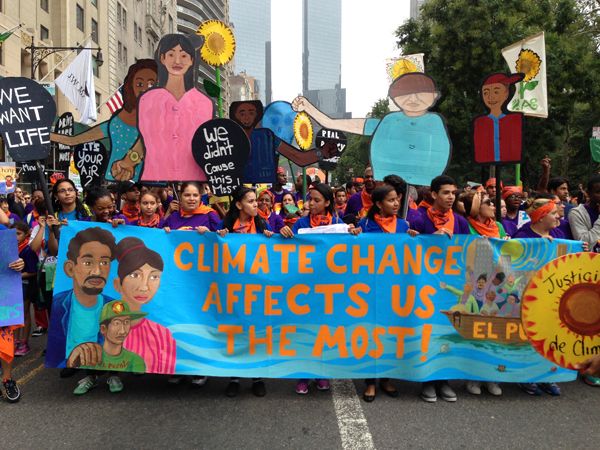 2. Renewable Energy Growth: Wind and solar energy, in particular, just keep growing and growing. An analysis put out by Federal Energy Regulatory Commission (FERC) right before Christmas reported that newly installed solar and wind electrical generating capacity increased between January – November 2013 and January – November 2014 from 4,166 megawatts (MW) to 4,728 MW, while new capacity for natural gas fell from 6,674 MW in 2013 to 5,513 MW in 2014 and coal fell from 1,543 MW to 106 MW. These figures are illustrative of what has been happening for several years in the U.S., and the percentage of new renewables worldwide is even better, more like 70-80 percent of all new electrical generating capacity.

3. New York Bans Fracking: What a great end-of-year development, brought about without question because of the strength of the popular movement against fracking throughout the state. From the close-to-200 local town, city and county resolutions and ordinances against fracking, to the year-after-year birddogging of Governor Cuomo, to the anti-fracking uprising at the Democratic Party primary ballot box this September, New Yorkers showed that there “ain’t no power like the power of the people,” if it is organized, visible and active. 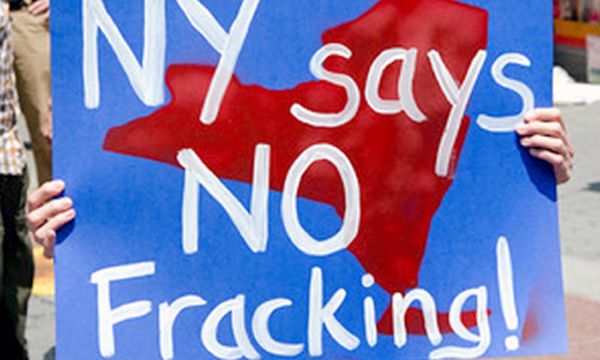 On Dec. 17, the Commissioner of the Department of Environmental Conservation issued an order to ban fracking in New York.

4. Fighting Fracking Infrastructure and Gas Exports at Cove Point and Beyond: 2014 was the year that the growing movement against the expansion of fracked gas infrastructure from New England down to Georgia and beyond, from gas pipelines to compressor stations to export terminals, burst onto the national scene. The proposed Cove Point, Md. export terminal 50 miles from the White House—one of about 20 proposed export terminals—became a focal point for this movement. Though FERC granted Dominion Power a permit, it is under appeal and will end up in federal court, and the movement against it and all of the other fracking infrastructure is gaining in strength.

5. Still No Keystone XL Pipeline: Thanks to the on-going and consistent work of a coalition of Indigenous, farmer-and-rancher and environmental groups and the increasingly-challenging economics of tar sands oil extraction, it is looking less and less likely that the Keystone XL tar sands pipeline is ever going to be built. And ditto for other from-Alberta pipelines. The “new CIA,” the Cowboy-Indian Alliance, held a politically powerful week of action in Washington, DC, and continued to work together afterwards in the nation’s heartland.