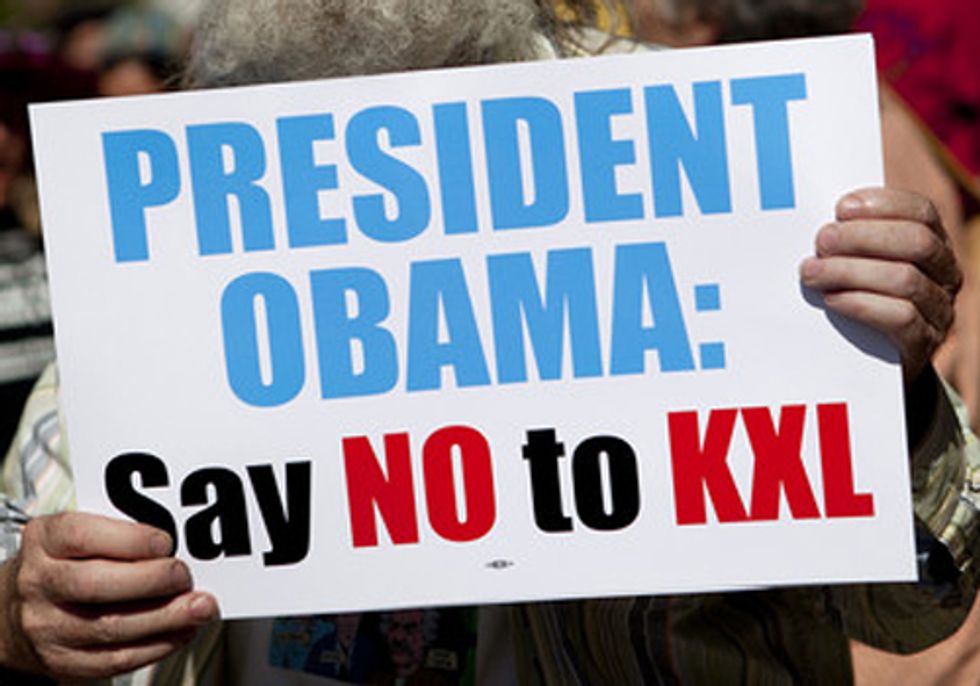 As the President kicks off his second term, there has been much chatter about town as to whether or not he will approve the Keystone XL tar sands pipeline. Mitt Romney made it clear that he would approve the pipeline on his first day in office—and even went so far as to say he would build it himself if he had too—while the President has emphasized the importance of climate change and renewable energy.

In an interview with AARP, the President noted that doubling fuel efficiency standards on cars would produce savings equivalent to what would be pumped through Keystone XL in 45 years. In his election night speech, he warned of the “the destructive power of a warming planet.”

Keystone XL is a means for reckless expansion of the tar sands industry, which is game over for the climate. The voters who re-elected Barack Obama expect him to create a legacy of action to stop climate change. Rejecting KXL would be a perfect first step to creating that legacy.

Given that climate change—and our country’s climate legacy—are of utmost importance to the President, we’ve identified the top five [commonsense] reasons to reject the Keystone XL tar sands pipeline:

1. Tar sands are “game over” for the climate. Canada’s tar sands, which Keystone XL would carry, could contain double the carbon dioxide emitted by global oil use in history—and green lighting the pipeline that would carry them to the global market would be disastrous for climate change.

2. The supposed benefits of the tar sands pipeline have been overhyped. While supporters once said that the pipeline would bring gas prices down, experts agree that the Keystone XL tar sands pipeline could even increase domestic gas prices—and have little chance of lowering them. Jobs numbers, too, have been wildly inflated; TransCanada gave U.S. officials a job number that was 67 times higher than the number they used in Canada. While every U.S. job is important, the estimates on this project have ranged from 50 permanent jobs, to 2,500 temporary jobs, to TransCanada’s claim of 20,000 jobs. Even unions agree that clean energy jobs outweigh this potential for temporary dirty oil jobs.

3. The Keystone XL tar sands pipeline puts our country’s natural resources at risk. The pipeline route passes through Nebraska’s Ogallala Aquifer, which is the country’s largest source of freshwater. The Aquifer provides drinking water and irrigation for millions of Americans throughout the country. Even a single spill could have disastrous consequences for generations to come—and a University of Nebraska at Lincoln analysis of the pipeline finds that it could have 91 major spills in 50 years.

Canada’s pro-industry energy regulator—the National Energy Board—just announced a sweeping audit of TransCanada’s Canadian operations. This is the latest in a long series of accidents, shutdowns and pipeline safety infractions that have hounded the Canadian pipeline operator TransCanada. Earlier this month, TransCanada was forced to shut its leak prone Keystone I tar sands pipeline down for four days after finding an “anomaly”—a technical term for cracks, corrosion or other defects in a pipeline which may lead to a rupture. These incidents are not unique; TransCanada has a sordid history as a pipeline operator.

4. On Tuesday, Nov. 6, Americans voted against dirty energy and against Big Oil. Big Oil bet big on the election—and lost big. Big Oil-backed groups spent over $270 million on television ads in the last two months of the cycle alone, and have little to show for it. A recent Greenberg Quinlan Rosner Research poll found that 64 percent of voters say they have a favorable impression of renewable energy.

In a Zogby poll released today, only 12 percent of respondents said that the Keystone XL tar sands pipeline was a “priority.” Meanwhile, 48 percent identified renewable energy as a priority.