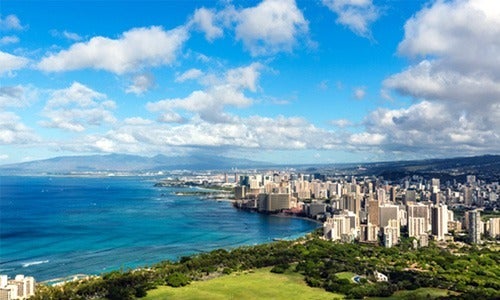 A solid majority, 71 percent of Americans, believe the country “should do whatever it takes to protect the environment,” according to a 2014 poll by the Pew Research Center.

This strong public interest in our environment extends to urban living, prompting NerdWallet’s curiosity: Even though we all know that the city we live in influences our transportation and energy choices, how do environmental impacts differ across the U.S.?

We explored the data for the nation’s 150 largest cities to shed light on the best places for those seeking a green lifestyle and a healthy environment. 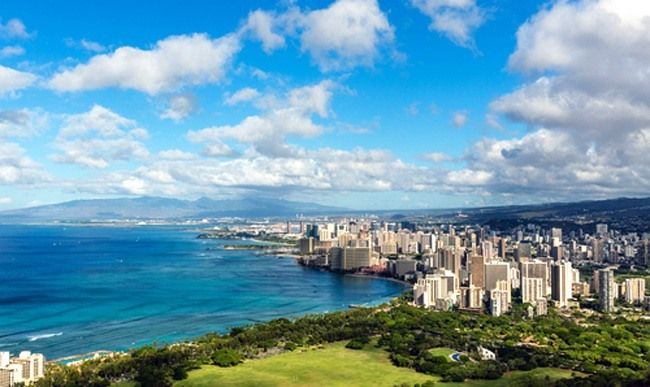 The city pictured above is America’s greenest city, according to NerdWallet’s 2015 ranking.

Environmental quality: To uncover the impact of pollution on residents’ health, we looked at each city’s 2014 median of the U.S. Environmental Protection Agency’s daily Air Quality Index—a measure of sulfur dioxide, carbon monoxide, nitrogen dioxide and ozone levels that guide the assessment of acute health effects. The higher the index number, the more polluted an area. In most cases, air quality in U.S. cities has a median index score under 100, which falls into the EPA’s “moderate” range.

Transportation: To understand how cities might influence lifestyle choices, we looked at data from the U.S. Census Bureau’s American Community Survey on commuting methods to find out how many workers are walking, biking, carpooling and taking public transit.

Energy sources: To gain insight into the fuels people are using in each city, we looked at data from the American Community Survey on heating in homes. We were specifically interested in the number of homes using coal and wood because these fuels are particularly harmful. We also examined the use of solar energy because of its sustainability.

Housing density: Urban sprawl increases transportation needs and resource use, so we looked at data from the American Community Survey on the percentage of residential buildings with 10 or more residences in each city.

Bigger is better: We might associate larger cities with polluting industries, but bigger cities tend to be denser, which reduces urban sprawl and energy needs for transportation per capita.

Air quality is fairly uniform: Many of the cities we examined fall within a narrow range of the EPA’s Air Quality Index, sitting between the classification of “good,” an index number under 51, and “moderate,” a number under 101. Of course, there are notable outliers, like Riverside, California, where the air quality about 30 days in 2014 reached “unhealthy” levels over 150.

Traditional fuels remain: While solar power is part of mainstream energy conversations, the data suggest adoption is lagging. Nationwide, out of 116 million homes, only 72,707 houses use solar heating, up from 2005 when the number was 36,682. While the use of traditional heating methods—including coal and wood burning—have remained stable.

This city in the nation’s 50th state tops our list with its air quality, the best of all the cities we analyzed, and for residents’ widespread use of solar energy. In 2014, the city received the EPA’s highest classification of “good” for 351 of the 360 days measured, giving it a median Air Quality Index of 27 for the year.

The national’s capital lands near the top of our list probably because of its excellent public transit, which carries 38 percent of commuters to work. Other highlights include the city’s low levels of pollution from heating fuels, such as coal and wood, in the dense city.

With a slightly higher number of dense residential buildings, but fewer commuters who walk or take public transportation, Arlington comes in just below its neighbor. Given their proximity, it isn’t surprising that Washington, DC and Arlington share a median Air Quality Index of 48, which is just within the EPA’s “good” classification.

San Francisco, long known as a center of activism around sustainability, scores well in terms of transportation, with 10 percent of commuters walking in the hilly city to work. The city also shines in terms of solar energy use, with slightly over 13.8 of every 10,000 homes using the sun’s energy for heat. In comparison, 6.25 of every 10,000 homes use solar heating nationwide.

It’s big and a lot of people live here, but New York City’s density is why it made our list. Many of the city’s over 8 million residents walk to work while still more use the city’s comprehensive public transit system. However, 7.2 of every 10,000 homes still use coal for heat.

More of Boston’s residents walk to work than in any other city on our top 10 list: 15 percent of Bostonians brave the seasons, including the harsh winter, on foot.

Like Miami, Orlando does well when it comes to air quality, with only one day in 2014 with unhealthful air. The quality of air here isn’t surprising, since residents don’t use coal and they burn little wood for heat.

While the city’s gray skies limit use of solar energy, Seattle makes our list for its air quality, high residential density and commuters who walk and use public transit at above-average rates. In the Emerald City, nine percent of workers walk to their jobs and four percent commute on a bike. 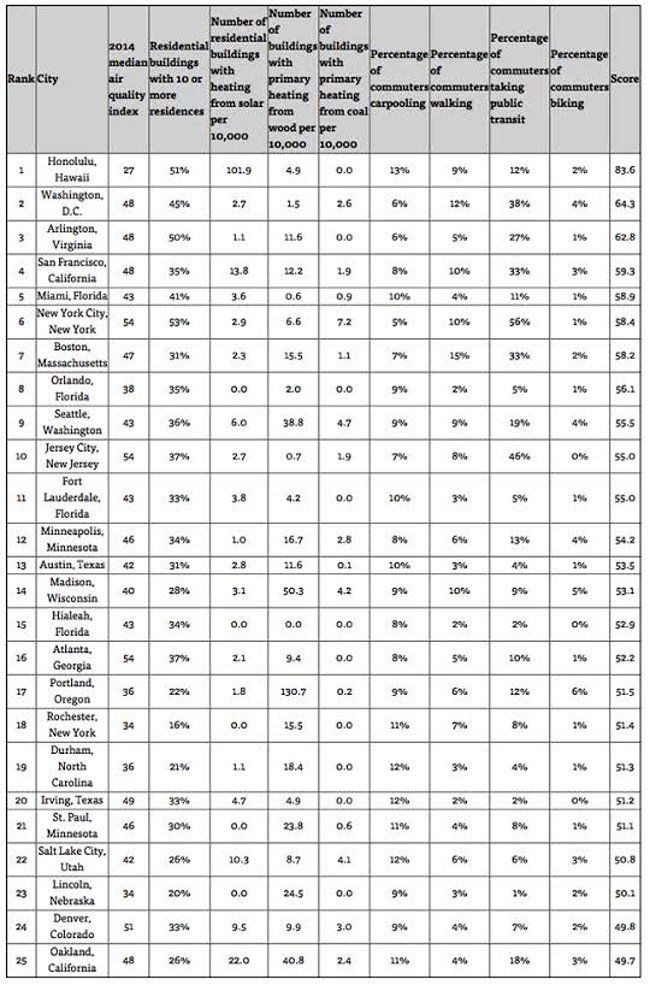 The score for each city was calculated from the following measures:

1. The 2014 Median Air Quality Index from the U.S. Environmental Protection Agency. This is 25 percent of a city’s score.

2. The percentage of workers who carpool, bike, walk or use public transit to commute to work from the U.S. Census Bureau’s 2013 American Community Survey. Together the transportation variables are 25 percent of a city’s score.

3. The percentage of occupied buildings with 10 or more residents is from the 2013 American Community Survey, this was 25 percent of a city’s score.

4. The number of residential buildings with a primary heat source of solar, coal or wood per 10,000 buildings is from the 2013 American Community Survey. Solar was taken as a positive variable and accounted for 8.33 percent of the final score while coal and wood heat sources were treated as negative and were 16.67 percent of a city’s final score.

Note: Newark, New Jersey, was originally ranked 24th, but because of environmental hazards outside the scope of the study, the city was omitted from the final list.