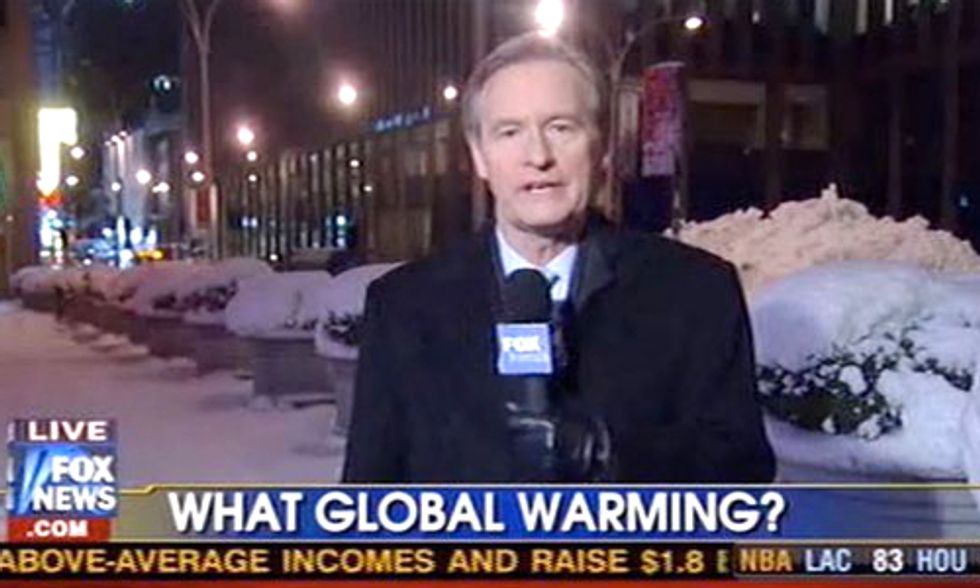 The evidence for climate change only got stronger this year, with a major climate report finding 95 percent confidence in manmade global warming and the amount of carbon dioxide (CO2) in the atmosphere hitting a record 400 parts per million. Climate doubters, in turn, became increasingly desperate, citing everything from a verified scam artist to the "Ouija board of weather."

We've compiled the 13 dumbest things media said about climate change in '13—you might be surprised to find which mainstream media outlets made the list.

In April, Rush Limbaugh claimed that CO2 in the atmosphere "may actually be making things cooler," going on to say that manmade global warming is a "political hoax." But the Economist article Limbaugh cited actually examined how much the Earth is warming from emissions of CO2 and other greenhouse gases, which by definition trap heat in the atmosphere.

In January, a FoxNews.com article asked whether the U.S. government had manipulated temperature data to fake the hottest year on record (2012) in the contiguous U.S. The article quoted climate "skeptics" including birther Steve Goddard who wrote that the 2012 data from the National Oceanic and Atmospheric Center was "meaningless garbage" and the U.S. only "appears" to have warmed due to data adjustments. However, temperature data typically has to be adjusted to account for flaws in the raw data that occur, for example, when temperature measurement stations are moved. These adjustments are publicly documented in peer-reviewed literature. Furthermore, satellite data from climate "skeptic" Roy Spencer, who was quoted criticizing the data, also found 2012 to be the U.S.' hottest year.

On his radio show, Sean Hannity promoted the claim that solar "hibernation" will soon bring a period of dangerous "global cooling" and "end the rise of the oceans," saying the information came from a scientist. What Hannity didn't realize, however, is that these claims came from a man who even climate "skeptics" have labeled a "scam artist": John Casey, who published his book on solar hibernation with the help of an astrologer who claims to be the illegitimate daughter of Ernest Hemingway. Hannity was, essentially, duped.

10. Fox News: Cites cold winter forecast from the "Ouija board of weather" to mock global warming.

Fox News hosts seized on a weather forecast predicting an especially cold winter for 2013 to cast doubt on global warming. However, the forecast came from the Farmer's Almanac, which makes predictions with a "secret formula" based on "tides, astronomical events and sunspots," and which meteorologists have called "the Ouija board of weather." Even if the Almanac's cold winter prediction were true, however, they would not negate the trend of warming temperatures in the U.S. and globally.

9. Limbaugh: "If you believe in God, then intellectually you cannot believe in manmade global warming."

Rush Limbaugh advised his religious listeners to choose between God and science on his Aug. 12 radio show, saying, "if you believe in God, then intellectually you cannot believe in manmade global warming ... You must be either agnostic or atheistic to believe that man controls something he can't create." Yet several religious institutions acknowledge man's role in the climate crisis, and have launched initiatives to fight global warming as a moral imperative. In response to Limbaugh's statement, the Evangelical Environmental Network published an open letter asking him to "refrain from your harmful rhetoric on climate change."

8. Fox Guest: "For every one scientist" that accepts climate consensus "I'll give you 10 scientists that said it's not manmade."

A Fox News guest made up statistics on Feb. 4, denying that 97 percent of climate scientists agree that climate change is real and manmade. Discussing climate change, Republican strategist Brad Blakeman said, "for every one scientist that says there is, I'll give you 10 scientists that said it's not manmade."

On Fox News Radio, Brian Kilmeade harangued a caller for commending President Obama's statement on climate change, saying that climatologists who accept the scientific consensus on climate change are "the corrupt ones." Kilmeade went on to ask the caller, "How do they make their living, climatologists? Telling everyone their industry has to be addressed."

6. Ben Stein On Fox News: Despite what "global warming terrorists will tell us, the science is not clear on" climate change.

On the Fox Business Network, Ben Stein said that "there is no cost that is too high to pay to save the Earth," but that regulations should not be enacted because the consensus on manmade climate change "is not 100 percent unanimous, despite what the ... global warming terrorists would tell us."

4. Fox News: Climate "deniers" are those who accept climate change.

Fox News tried to reclaim the phrase "climate denier" to refer to those who accept the scientific consensus on manmade climate change. Fox host Steve Doocy promoted National Review Editor Rich Lowry's co-option of the term "climate denier," which Lowry previously condemned as a way of equating climate "skeptics" with Holocaust deniers. Lowry argued that those who support action on climate change are ignoring that temperatures "have been flat for 10 or 15 years," which Doocy labeled an "inconvenient truth." A recent study rebutted that "inconvenient truth," finding with 94 percent probability that there has been warming during that short time frame.

3. CBS: Global warming "pause" is an "inconvenient truth" that "emerged on the way to the apocalypse."

This year, mainstream media were not immune from pushing the type of foolish rhetoric that regularly crops up in the conservative media. Echoing the Fox News segment above, CBS said the speedbump in global warming was an "inconvenient truth" that "emerged on the way to the apocalypse." CBS' Mark Phillips called it "ammunition" for "skeptics" and immediately proved it by interviewing Benny Peiser, who used the pause to cast doubt on the urgent need to address climate change. But the alleged "pause" may have never actually happened: the rate of atmospheric temperature increase over the last 16 years proceeded at the same pace as it has since 1951 according to a recent study. And in any case, none of this contradicts the long-term trend of global warming, especially as oceans are warming 15 times faster than in the past 10,000 years.

Bloomberg News published a claim from Marc Morano—who is paid by an oil industry funded organization to confuse the public about climate change and has no scientific background—that catastrophically high levels of CO2 should be "welcome[d]" because "plants are going to be happy." However, his argument ignored CO2 emissions' contribution to global warming, which is connected to rapid changes in rainfall patterns, severe drought and increased risk of plant species extinction.

On May 17, CNBC's Squawk Box featured the co-author of a Wall Street Journal op-ed that claimed that people should be "clamoring for more" CO2, as it is a "boon to plant life"—an article which led to widespread criticism.  Co-host Joe Kernen celebrated the op-ed, saying he wanted to "make the point that CO2 is not a demon." But he ignored top climate scientists' warnings that CO2 levels above 350 parts per million (ppm) will eventually result in catastrophic climate change—and CO2 levels have already passed 400 ppm this year. Kernen's misleading argument fit right in with this year's climate skeptic narrative, and the absurd claims to which media turned to dismiss climate change.