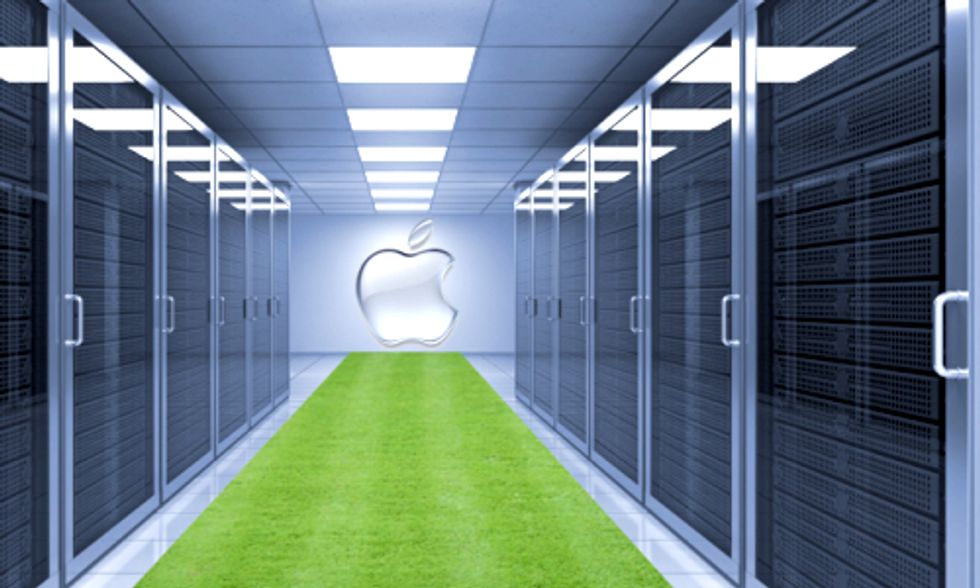 2013 has been a whirlwind of exciting developments for the growing idea that the Internet should be powered with clean energy, and it couldn’t happen at a better time.

As access spreads around the world and people watch more streaming videos and share more photos, the Internet has the potential to become either a big cause of global warming pollution, or a driver of the clean energy transition we need, depending on what the companies behind it decide to do.

Here are our top 11 stories about the Green Internet in 2013:

Apple released an environmental report in March showing that it had made real progress in its effort to power the iCloud with renewable energy, and not coal. Apple had already committed to 100 percent renewable energy for its data centers, but this report disclosed how Apple plans to do it, allowing customers to have faith that Apple is meeting its ambitions with real action.

Salesforce became the latest company to commit to powering its cloud with 100 percent clean energy in March. The company’s rapid growth means that it will need more data centers soon to store its clients’ data, which is why it’s so important that Salesforce has committed to grow using renewable energy.

Apple announced in July it would be building a solar array to power its data center near Reno, NV. Apple is using an advanced technology that includes mirrors to concentrate sunlight, and the deal was also the first that took advantage of utility NV Energy’s “Green Rate tariff” in Nevada, which allows any customer to buy explicitly renewable energy.

Rackspace, the Texas-based tech company who offers data services to a range of businesses, committed to a goal of powering its data centers with 100 percent clean energy in February. The company’s sustainability director described why they’ve set the ambitious goal at a Greenpeace forum in November, saying: “Our customers simply expect green energy.”

7. Microsoft joins the race to be the greenest Internet company

The competition among Internet companies to power their operations with clean energy gained a new entrant in November. Microsoft announced that it would take a page from the book of its chief competitor, Google, when it announced that it will purchase wind energy in Texas to power its data center there, marking its first ever large-scale purchase of renewable energy.

Box became the sixth and latest company to join the growing club of global technology firms who have committed to powering their cloud computing operations with 100 percent renewable energy. Box houses its customers’ data in rented co-location facilities, and its new policy shows that all cloud computing companies can make the smart decision of moving toward renewable energy, whether they own their own data centers or not.

5. Your iPhones, iPads, MacBooks get a dose of solar energy in Arizona

If you own an iPhone, iPad, or MacBook, Apple made an announcement in November that should make you feel pretty great: at least some part of your Apple products will soon be built using clean, renewable solar and geothermal energy. Apple announced that it will start building high-tech glass for its products in Arizona, at a facility that will be 100 percent powered by solar and geothermal energy.

Facebook announced in November that it will use 100 percent wind energy to power its data center in Iowa. In 2012, having heard from hundreds of thousands of its fans as part of Greenpeace’s Unfriend Coal campaign, Facebook committed to a goal of powering all of its data centers with 100 percent clean energy. It’s now building two 100-percent renewable data centers, in Iowa and Sweden, and is working with its utility in North Carolina to increase the amount of clean energy available for its data center there too.

Despite all the good news stories here about Google and Facebook powering with clean energy—and pressuring their electric utilities to do the same—we learned in 2013 that the companies both joined the American Legislative Exchange Council (ALEC), a powerful corporate “bill mill.” ALEC offers corporations the chance to ghostwrite bills for state legislators, and has led a charge around the country in the past year to attack successful clean energy laws. Google and Facebook say they’re ALEC members for other, non-energy related reasons, but they shouldn’t be lending their good name or their money to a group that is undermining all the good they’ve done.

If you want to watch the new clean energy economy shake off the weight of the old polluting one, North Carolina provided a good glimpse into how that transition is unfolding in real time. Apple, Facebook and Google teamed up to compel their electric utility in North Carolina, Duke Energy, one of the nation’s biggest emitters of global warming pollution, to offer a new breakthrough renewable energy program in November.

Despite all the good news above, the company that may power more of the Internet than anyone, Amazon, remained addicted to coal. Amazon stores the data for some of the biggest Internet services in the world, including Netflix, Yelp, Pinterest and others. So its refusal to budge leaves a dark cloud over the otherwise increasingly sunny future of how the Internet will be powered. Tell Amazon to get on the clean energy bandwagon here, and look for more ways in 2014 that you can tell Amazon and its customers to power their wonderful services with equally wonderful energy from the wind and sun.