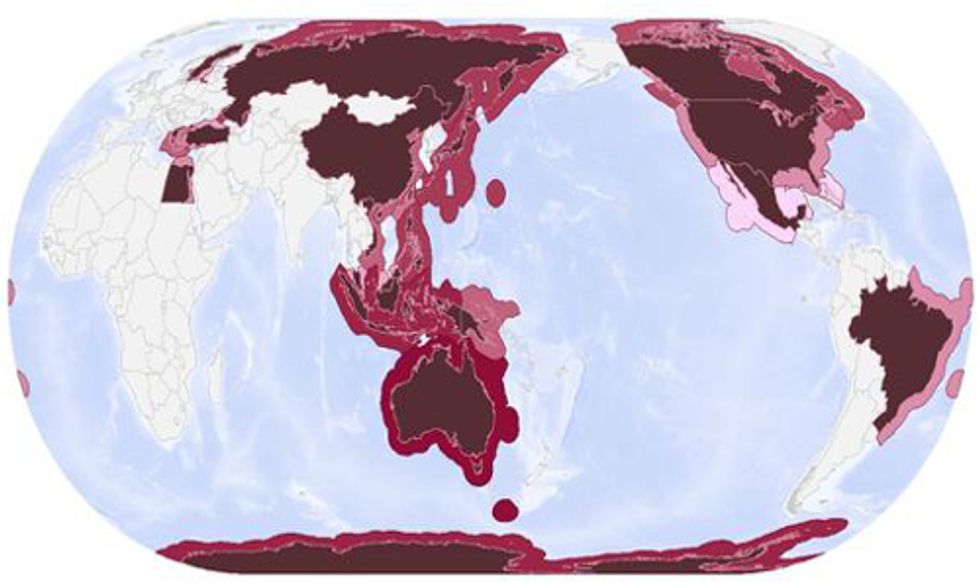 If you walk on the beach and look out at your nearest stretch of the global ocean, it can be hard to fathom the incredible diversity that lies beneath the waves. Our oceans contain an estimated 2.2 million species, the vast majority of which have never been seen or described by scientists.

However, in recent years we’ve been making serious headway in trying to understand the diversity that supports an incredible array of benefits that we rely on our oceans to provide. The well-being of hundreds of millions of coastal people relies on the nutrition and employment provided by fisheries and the coastal protection provided by habitats like mangroves and coral reefs. Yet despite our oceans’ value, until recently we lacked a global map of marine areas where we should prioritize biodiversity conservation efforts.

The study pulls together an extensive database of where 12,500 different marine species—fish, marine mammals, seabirds, corals and others—are found. We used these data to identify not only where the greatest numbers of species are located, but where the highest concentrations of rare species are and where the most unique ones can be found. Then we combined these data with maps of where human activities such as fishing, climate change and marine pollution are having the greatest impacts on the ocean.

Together, these data allowed us to create a map of where marine biodiversity is most and least threatened by human activities. Places that are heavily impacted are priorities for action to prevent further declines, while places that are lightly impacted can be protected before they are degraded. The information we generated from our work can be used as a roadmap for prioritizing the protection of particularly important places for biodiversity conservation.

Here are some of them: the top 10 places with the greatest extent of priority areas within their waters.

A reef in Papua, Indonesia. The lack of wave action combined with clear water allow corals to grow very near the surface in this unique environment. Photo credit: Burt Jones and Maurine Shimlock

2. Indonesia: Although its colorful reefs are among the most diverse on Earth, many of Indonesia’s marine ecosystems are also among the most threatened due to dynamite fishing, mangrove destruction and high rates of shark fishing and finning.

3. Antarctica: Home to many seabirds, mammals and other species found nowhere else, marine ecosystems in Antarctica have been kept more intact than in many places thanks to their inaccessibility and international agreements under the unique Antarctic Treaty System.

4. Russia: Although Russia is home to many unique coldwater species that have been relatively safe from human activities, climate change may open up many of these areas to fishing and mining.

5. Japan: This island nation’s waters are home to many tropical coral reef species as well as species that thrive in colder waters, all of which are threatened by impacts from fishing, pollution from shipping traffic and climate change.

6. The Philippines: With some of the highest concentrations of marine species — and relatively rare species — in the world, nearly all of the Philippines marine areas are highly impacted by human activities, including overfishing, destructive practices like dynamite fishing and pollution from shipping traffic.

7. Canada: This country’s territorial waters are rich in seaweed species and home to 40% of the world’s marine mammal species, but threatened by impacts from fishing and marine-based pollution.

8. Greece: This Mediterranean country’s concentration of unique species includes 14 marine mammal species, half of which are considered Endangered or Critically Endangered by the IUCN Red List. These animals are threatened by development along its extensive coastline, marine pollution and overfishing.

9. Vietnam: Vietnam has very high numbers of marine species, including more than 300 species of reef-building corals, many of which are threatened by marine pollution from shipping and fishing pressures.

10. Papua New Guinea: This country has some of the highest levels of marine biodiversity in the world—including pygmy seahorses, reef sharks and tropical fishes—but is considerably less impacted than other areas in the region.

We found that climate change and fishing had the biggest impacts on priority areas, revealing the need for both global and local action. Policy efforts aimed at reducing the human activities causing climate change will be critical for mitigating further losses, especially in the open oceans and near the Arctic and Antarctic oceans. Fishing impacts at local and regional scales will need to be better managed through a combination of spatial management and traditional fisheries management approaches.

Preserving places of high biodiversity is a major international policy priority. The U.N. Convention on Biological Diversity has called for 10 percent of the ocean to be protected by 2020, with a focus on areas that are especially important for biodiversity and ecosystem services that people depend on, such as climate regulation and fish breeding areas. According to the IUCN, close to three percent of the world’s ocean is currently under protection.

As we continue to collect and refine data, as well as incorporate socioeconomic and governance considerations, it is possible that new marine conservation priorities may arise. However, results from this study are an essential first step in guiding limited resources to regions where investment can best sustain marine biodiversity—and, by extension, the oceans on which we all depend.