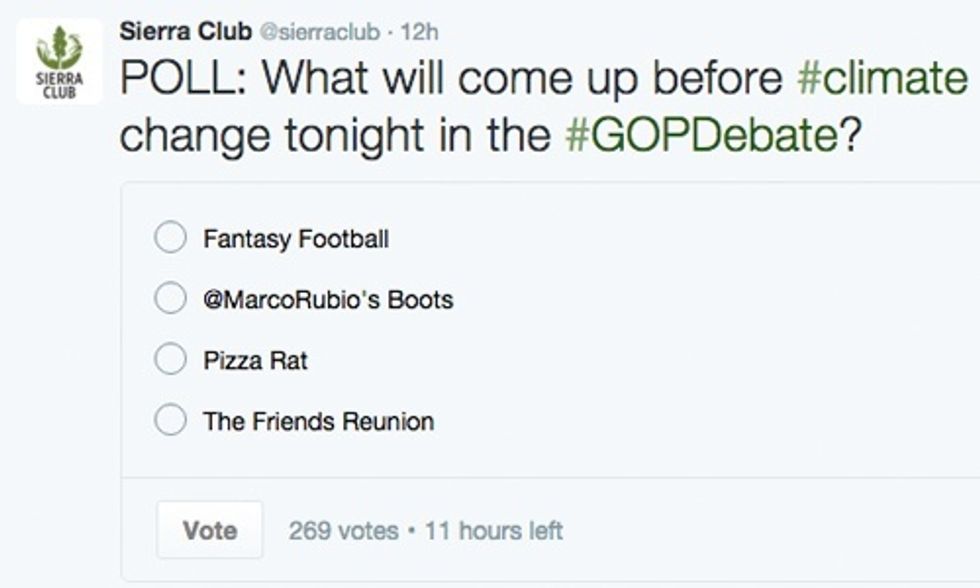 Fox Business Network moderators failed to ask the candidates a single question on climate change at the GOP debate in Charleston, South Carolina Thursday night. Despite the fact that President Obama made climate change a major theme of his final State of the Union address on Tuesday, Republicans continue to refuse to discuss one of the most important issues impacting the planet. The majority of GOP candidates, including frontrunners Donald Trump, Ted Cruz and Marco Rubio, still question the science on global warming.

Here are the 10 funniest tweets on the candidates failing to even mention climate change during the GOP debate last night:

#GOPdebate - @JohnKasich so energy independence is ok but only with #fracking? Instead try clean energy and be conservative w/ #climate
— Richard Stein (@Richard Stein) 1452827574.0

They may be arguing, but they agree on so much: denying climate change, repealing Obamacare, and cutting taxes for the wealthy. #GOPdebate
— Hillary Clinton (@Hillary Clinton) 1452831402.0

Seriously, how is it possible that not one real question about#climate change has been asked at any #GOPDebate? Irresponsible moderators.
— Peter Gleick (@Peter Gleick) 1452833993.0

‘Another Nail in the Coffin’: Obama Set to Overhaul Coal Leasing on Public Lands