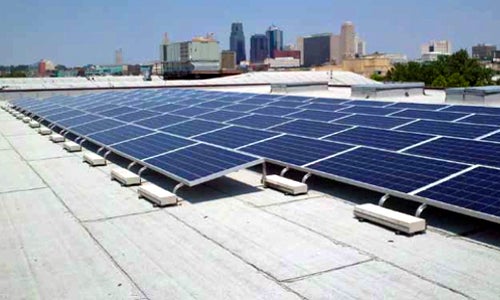 While giant new solar farms located in rural areas and deserts have been grabbing the headlines lately, America’s cities have been embracing solar power as well. A new report from Environment America Research & Policy Center, Shining Cities: Harnessing the Benefits of Solar Energy in America, shows how wide that embrace is. 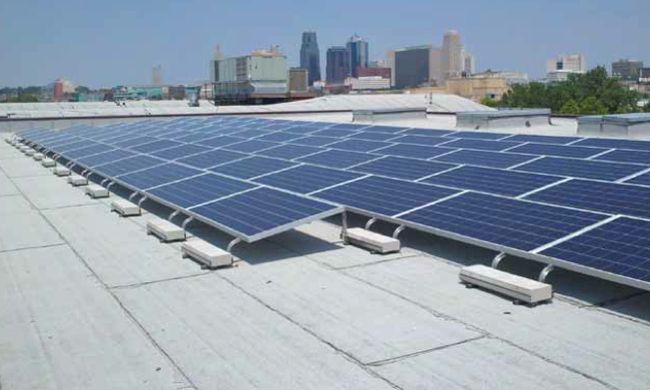 Kansas City may not be in the sun belt, but it’s embracing solar power. Photo credit: City of Kansas City

The report found that 65 American cities account for 7 percent of U.S.’s 20,500 megawatts (MW) of solar capacity, more than all the solar installed in the country in 2009. And the top 20 cities were the leaders, accounting for 6.5 percent of the country’s solar capacity but using just .1 percent of its land.

“Cities across the U.S. are recognizing and harnessing the transformative power of solar energy,” says the report. “Many local governments have recognized the benefits of solar energy and are using it to make their electric grids more efficient, create local jobs, protect residents from the dangers of extreme weather events, and mitigate pollution that is fueling global warming and endangering public health.”

Unsurprisingly, Sun Belt cities were the leaders, with Los Angeles the top city, followed by San Diego and Phoenix. The top 10 also included San Jose, Honolulu, San Antonio and New Orleans. But, demonstrating that solar’s potential is not limited to the sunny south, Indianapolis—which averages 187 sunny days annually compared to Los Angeles’ 292—came in at number four, Denver at number eight and New York City at number nine. Newark and Boston also cracked the top 20. And the report spotlighted initiatives in cities like Chicago and Fort Collins, Colorado that are growing their solar sectors. 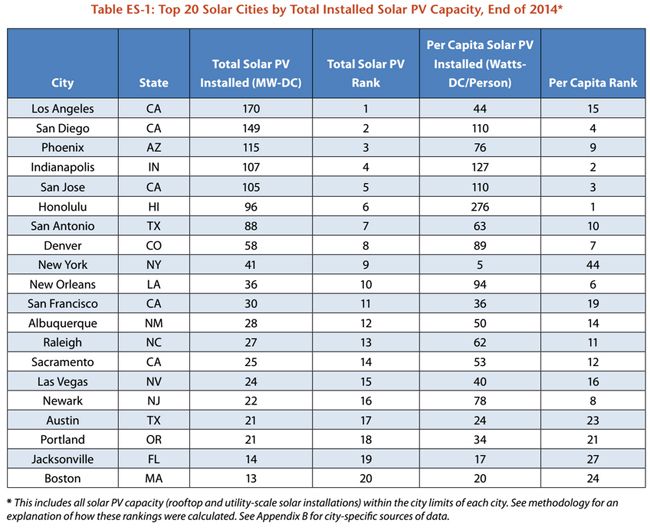 “Los Angeles is blessed with abundant sunshine and with the most solar power in the country we are proud to be putting it to good use,” said Los Angeles Mayor Eric Garcetti. “We look forward to increasing that amount significantly in the coming years through the nation’s largest Feed in Tariff program and broadening adoption by residential customers, simultaneously creating green jobs and combating climate change.”

“San Diego is leading the way in solar energy and that’s going to help us meet many of our city’s environmental goals and put San Diegans back to work,” added San Diego Mayor Kevin Faulconer. “Solar energy is a key element to the city’s proposed Climate Action Plan, which calls for 100 percent renewable energy use in the city by 2035.”