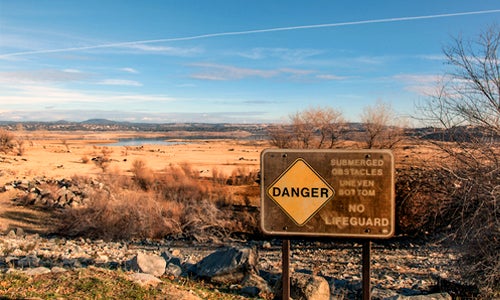 Much of California is expected to receive rain over coming days from a series of storms lined up over the Pacific. However, it is unlikely to make a significant contribution to the overall drought situation. California is dependent on the snowpack in the Sierra Nevada to provide water to fill the rivers and reservoirs that we rely on throughout our long, dry summers. The current snowpack remains in a dismal state, as the graph below shows:

The graph shows the amount of water held in the snowpack in the central Sierra. The black line shows what we receive in an average year. The pink line shows the current year—less than 40 percent of normal and equal to the 1976-77 winter, considered one of the driest winters ever. It is also important to note the green line, which shows that the snowpack in 2012-13 was also far below average. And the 2011-12 winter was also disappointing, dramatically compounding this year’s deficit.

Next week, the Department of Water Resources and others will conduct the all-important April 1 snowpack survey. By April 1 of each year, California water managers generally have enough confidence in predictions of how the year’s water supply to determine how much water to allocate to the many water uses in the state, including farms, cities and fish and wildlife. The current series of storms will bump the snowpack up before the survey, but nobody expects a significant improvement to the drought outlook.

Despite hopes for significant rain and snow from the series of Pacific storms, we have seen numerous signs of a worsening situation this week, including those below. American Rivers is working in many ways across California to better prepare for the next drought, which is sure to come sooner than anyone would like. For example, we are trying to restore access for salmon into the upper reaches of rivers in the Sierra Nevada to escape the warmer temperatures in the Central Valley. We are working with water and power agencies in the San Joaquin and Sacramento River basins, as well as key federal and state agencies such as the State Water Board, to improve flows where necessary and restore river and floodplain habitat to help recover salmon populations.

Sacramento’s Water Supply Could Soon Be High and Dry

If the American River—which is the primary source of water for the City of Sacramento—drops another foot and a half below current levels, the pump station that feeds the city water system will be sucking air. As a result, the water department will go before the Sacramento City Council on April 8 to ask for $3 million for rental and installation of submersible pumps pull water out of the river.

California wildlife officials launched a massive trucking operation on Tuesday to move 30 million Sacramento River salmon toward the sea to help the fish avoid harmful river conditions caused by drought, such as warmer temperatures and greater concentrations of predators. Three climate-controlled tanker trucks transported about 400,000 juvenile salmon from the Coleman National Fish Hatchery near Red Bluff to floating pens in the Sacramento River near Rio Vista, bypassing some 180 miles of the Sacramento River. From there, the three-inch long fish will still have to swim 70 miles to pass through the Golden Gate out to the Pacific. More than 200 truck trips are expected over the next three months from state and federal hatcheries in the Central Valley. The scale of the operation is unprecedented in the state. The $1.4 billion commercial and recreational salmon fishery in California supports more than 22,000 jobs. 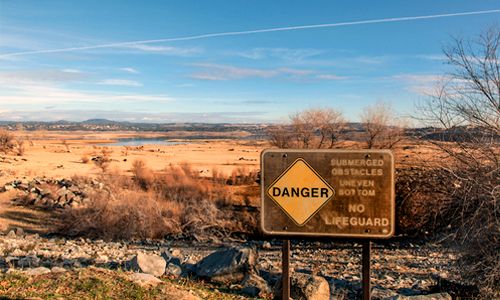 The Santa Clara Valley Water District alerted cities and companies last week that it was reducing allocations of treated drinking water by 20 percent through the end of the year, the San Jose Mercury News reported, affecting more than 1.5 million people in seven cities. The cities, including San Jose, will now be forced to make up for the lost water by pumping more groundwater, urging residents to conserve or using other water sources.

“The 800-pound gorilla in the Kings County water debate is back — what to do about the groundwater overdraft problem that is depleting underground aquifers with no end in sight,” reports the Hanford Sentinel. “That unanswered question was front-and-center at the Kings County Water Commission meeting Monday night in Hanford. In some ways, it was a replay of discussion in 2010, after the major 2006-09 drought. Recent satellite measurements indicate that, from 2005 to 2010, the Central Valley lost the equivalent of Nevada’s Lake Mead in overdraft. The state’s response was to direct agencies like Kings River Conservation District to form regional groundwater management plans.”

Some Water Planners Unable to Keep Up With Drought

Recently, three water agencies in the Santa Barbara area—Santa Barbara, Montecito and Solvang—joined forces to place a bid on “surplus” State Water from purveyors in central California to augment their water supplies, according to the Santa Barbara Independent. The three agencies offered what seemed at the time to be an excessive amount: $1,600 an acre-foot. Their bid was not at all competitive. The winning bid weighed in at a staggering $2,200 per acre-foot, and the three thirsty water districts went away empty handed. The Montecito water district managers have warned about “going dry by July.”

The record breaking drought has taken a tremendous toll on the state of California. Below is a stunning photo essay compiled by Earthjustice,