The Tragic Tale of Tony the Truck Stop Tiger 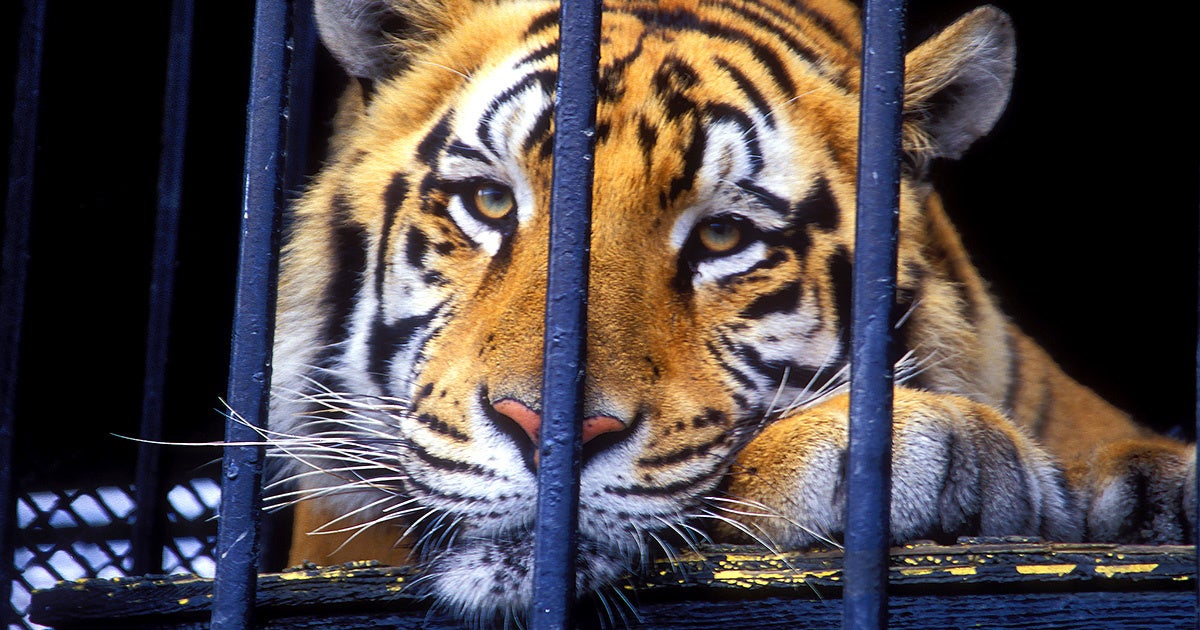 For more than six years, the Animal Legal Defense Fund fought tirelessly to save a tiger named Tony from a cage in the parking lot of a Louisiana truck stop. Sadly, we received news last week that Tony had died of kidney failure after spending 16 years confined to his cage, living and dying as a roadside attraction. Tony’s plight is a microcosm of the problems with our legal system, a system that treats sentient beings as property and affords disproportionate political influence to their captors and abusers.

Tony was born into captivity, sentenced from birth to a life of exploitation, a gimmick used by his owner Michael Sandlin to sell gasoline at the Tiger Truck Stop. It doesn’t take a degree in veterinary medicine to know that a truck stop is no place for a tiger. But veterinarians and animal behaviorists weighed in emphatically on Tony’s behalf. Dr. Jennifer Conrad, a doctor of veterinary medicine with decades of experience with captive large cats, personally visited Tony and concluded that he was “exploited to the detriment of his welfare.”

Dr. Marc Bekoff, professor emeritus of Ecology and Evolutionary Biology at the University of Colorado, Boulder, concluded that Tony’s enclosure was completely unnatural and totally unfit, and that the manner in which Tony was kept at the Tiger Truck Stop fell significantly below the bare minimum required to ensure his psychological welfare.

The state legislature and the Louisiana Department of Wildlife and Fisheries (LDWF) recognized that keeping wild animals in captivity causes immense animal suffering and threatens public safety, so they banned the private possession of tigers. But the agency bowed to pressure from the Tiger Truck Stop and issued it a grandfather permit to keep Tony in spite of the ban.

In early 2011—moved by Tony’s suffering and the passion of his supporters—we sued LDWF, arguing that the truck stop wasn’t eligible for a grandfather permit. And we won. The trial court ruled that because the truck stop violated a local ordinance prohibiting the ownership and exhibition of tigers, it couldn’t qualify for a permit. The court ordered LDWF to revoke the permit and prohibited it from issuing any new permits. The Louisiana Court of Appeal affirmed the trial court’s decision, leaving the Tiger Truck Stop and Michael Sandlin with an unlawfully possessed tiger and no permit to keep him.

That should have been the end of it.

LDWF should have seized Tony and sent him to a sanctuary where he could have lived out the last six years with grass under his paws, fresh air in his lungs and caretakers who prioritized his well-being. Instead, Tony would spend the next six years as a victim to a lethargic legal system that failed him at every turn, notwithstanding the indefatigable efforts of his legal advocates.

At the root of the problem is the fact that in the U.S., animals are property. And any time one asserts the rights of property against the rights of its owner, the game is rigged. Tony’s “owner,” Michael Sandlin, was able to exploit a narrative of private property rights under siege, claiming over and over again that he had a God-given right as an American to own a tiger.

Sandlin even filed his own lawsuit, arguing that Louisiana’s ban on tigers violates his property rights. We intervened against Sandlin in the case to defend the ban and the right of the government to prohibit the inhumane captivity of wild animals. The case has been pending for more than five years. Although we expect Sandlin’s lawsuit to lose, as a delay-tactic to keep Tony trapped at the truck stop, it succeeded spectacularly.

Another troublesome aspect of our legal system also doomed Tony to die at the truck stop: The undue influence of money in politics and the corruption of the political process by those who abuse animals.

In 2014, Sandlin convinced his state senator, Rick Ward, to introduce a bill to exempt Tony—and only Tony—from the state ban on big cats. The bill carved out a retroactive exemption to place Sandlin above the law that applies to all other Louisiana citizens, co-opting the legislature to undo the legal victory that revoked the truck stop’s permit.

Despite our on-the-ground efforts to stop the bill in Baton Rouge, it passed and was signed into law by then-governor Bobby Jindal. We challenged the new law as an unconstitutional “special law”—a giveaway to a private special interest at the expense of the public interest. But the lawsuit was bounced on a procedural technicality to a different court, then languished, awaiting a ruling from the court that didn’t come quickly enough to spare Tony.

All told, we filed four lawsuits, intervened in a fifth lawsuit, and fought legislatively for Tony’s freedom. Tragically, it wasn’t enough to overcome the lethargy of the courts to act—and the corruption of Louisiana politics.

But we will hold our grief over Tony’s death in our hearts and our memories as we continue to fight to prevent Michael Sandlin and the Tiger Truck Stop from replacing Tony with another tiger, and as we fight for the liberation of other wild animals from cruel captivity.

While we have had numerous legal victories for captive wildlife—from lions to tigers to bears and more—we remain committed to fighting for animals using the laws we do have—while simultaneously working to transform the legal system to recognize the obvious: Animals are more than just “property.”