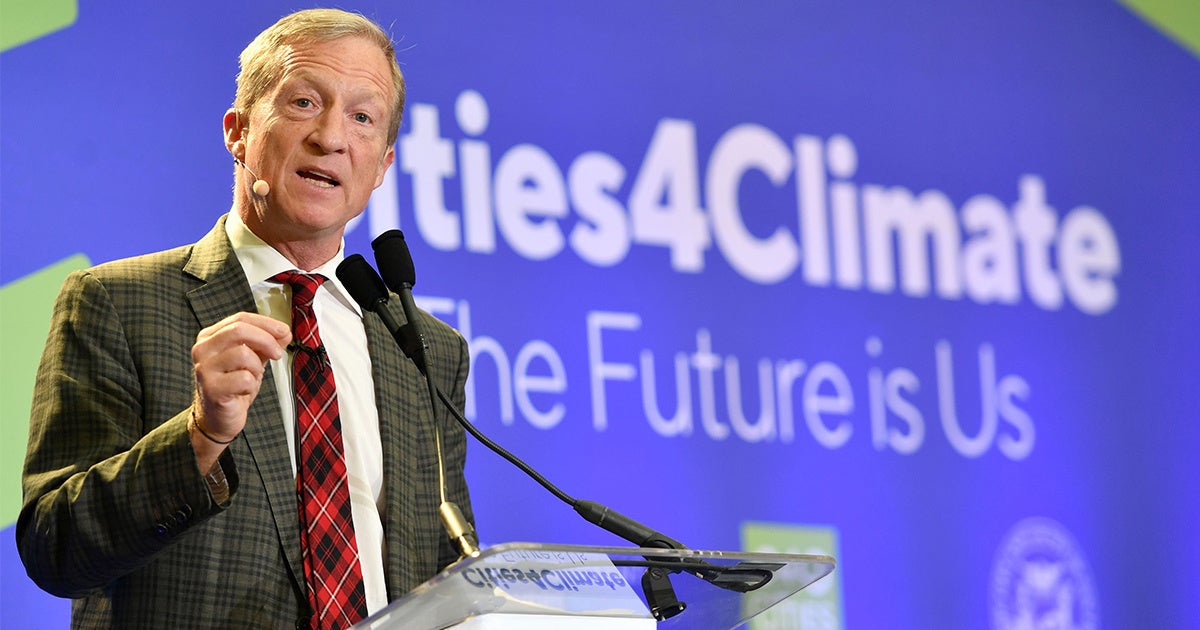 Tom Steyer speaks during the C40 Cities For Climate: The Future Is Us event in San Francisco, California on Sept. 12, 2018. JOSH EDELSON / AFP / Getty Images

Despite repeated assurances he would not do so, billionaire philanthropist and activist Tom Steyer — who has previously pledged his vast fortune to such causes as defeating the Keystone XL pipeline and mounting a national campaign demanding the impeachment of President Donald Trump — officially announced on Tuesday the launch of a 2020 campaign for the Democratic Party presidential nomination.

“It’s true,” Steyer said in a post on Twitter along with a kick-off campaign video. “I’m running for president.”

Tom Steyer Announces Candidacy for President: “I am running to end corruption of our democracy by corporations and give more power to the American people. Jo…

While Steyer’s work as a hedge fund manager and financier has resulted in what Forbes estimates is a .6 billion fortune, the newly-announced candidate states in his launch video that, unlike Trump, he is acutely aware of the injustice of a society in which some are able to hold enormous riches while others struggle to put food on the table.

“We have a society that’s very unequal and it’s really important for people to understand this society is connected,” says Steyer in the video. “If this is a banana republic with a few very, very rich people and everybody else living in misery — that’s a failure.”

Another Democratic candidate at this point in the primary race — especially one with Steyer’s outward pedigree and despite whatever bona fides or unique skills he brings to the table — was quick to draw ridicule and derision from progressive critics who said that his resources and the political machine he has built in recent years could be put to better use than by engaging in what is perceived as vanity project by many.

The Greenlining Institute’s Bruce Mirken, writing on his personal Twitter account, put it this way: “It’s pretty clear @TomSteyer is the answer to a question no one is asking.”

As writer Anand Giridharadas suggested, the very rich — whatever their intentions — cannot save us:

According to The New York Times:

Mr. Steyer may be a questionable vessel for a populist message, as a billionaire financier in a party increasingly defined by concern for economic inequality, and as a 62-year-old white man courting an audience of liberals in a Democratic Party preoccupied with racial diversity and gender equality.
Yet his candidacy instantly transformed the financial shape of the race; he vowed to spend an enormous sum of his personal fortune on his campaign.
“Tom has committed to spending at least 0 million on this campaign,” said Alberto Lammers, a spokesman for Mr. Steyer.
That figure exceeds the total fund-raising over the last three months by Joseph R. Biden Jr., Pete Buttigieg, Elizabeth Warren, Bernie Sanders and Kamala Harris — combined. A 0 million budget would represent about half the cost of Hillary Clinton’s 2016 primary campaign; most candidates who run for president spend a fraction of that sum.

While Steyer does not explicitly mention impeaching Trump in his campaign rollout, Salon’s Sophia Tesfaye suggests his presidential bid could be enough to “shame” House Speaker Nancy Pelosi and other top Democrats into taking more forceful action on the issue.

“Steyer’s public case for impeachment stalled out after he initially bowed out of the presidential race six months ago,” writes Tesfaye, “but his group, Need to Impeach, recently released a million ad buy for national networks in New Hampshire and Iowa, criticizing Democratic Party leaders for doing nothing.”

Over at Splinter, journalist and commentator Libby Watson was having none of it in her column “Tom Steyer Thinks You’re Stupid.” Of course, Steyer has every right to run for president if he wants to, argues Watson, but that’s not the point. She writes:

It’s not that Tom Steyer is cheating. It’s that his obscene wealth and the accordant ability to buy his way into the political system is exactly what’s wrong with America. It’s that the existence of Tom Steyer, billionaire, is cheating. And it’s wrong.

Steyer’s campaign launch video proved he does not understand this at all. Throughout, he railed against big money in politics and corporate interests swaying the political system in their favor — while running a campaign for president that’s only made possible by the billions he amassed at his hedge fund. He doesn’t understand that this isn’t a good thing even if the billionaire with outsized influence happens to be a nice old California hippie type who just loves the environment and says the right things about the rest of the rich guys.

A quixotic billionaire campaign from the older brother from Succession might be better than, say, Exxon Mobil personified running (hey, corporations are people, right?). But Steyer doesn’t realize that he does not have the moral authority to rail against the system that created him just because he is One of the Good Billionaires. The point of democracy is representation by the people, not representation by an uber-wealthy guy who promises real hard to figure out what real people need.

Steyer, however, made it clear he thinks he has a message worth sharing and — like other billionaire candidates before him — has the resources to fund his own campaign.

“Let’s take our democracy back from corporations and special interests,” Steyer added, “and give it to the people — the way it was always intended.”