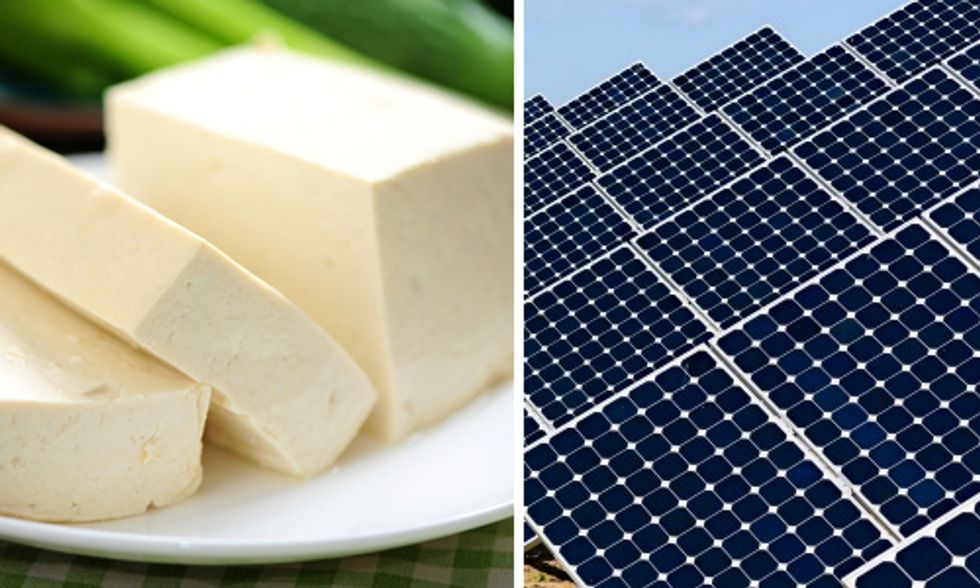 British researchers have found a new way to cut the cost of solar cell manufacture, and at the same time make the process less hazardous. Ironically, it is also very old way—using a chemical important in turning soy milk into tofu.

Jonathan Major and colleagues at the University of Liverpool report in Nature journal that magnesium chloride—traditionally added to soy milk as a coagulant to make tofu, but also used in gritting roads in winter time, used as bath salts and sometimes even sold as a health supplement—could replace cadmium chloride as a “doping agent” to increase the efficiency of cadmium telluride solar cells.

Cadmium chloride is very expensive, costing $0.30 (£0.18) per gram. It is also highly toxic and very dangerous to handle, which adds to the process costs. Naturally-occurring magnesium chloride costs only $0.001 per gram, and is one of the substances that makes the ocean salty. Since the planet is two-thirds ocean, there is no danger of running out of supplies.

Photovoltaic solar cells that convert sunlight directly to electricity are now big business, and getting bigger. They can be made of thin slivers of silicon, but the silicon wafer has to be 99.999 percent pure, and 200 microns thick  (0.2 millimetres). So industry has also started using cadmium telluride to make sheets of photovoltaic cells that have a thickness of only two microns (0.002mm)—so thin and flexible they could even be sold by the roll.

The problem with cadmium telluride is that, to make it efficient enough to compete, it must be washed with a doping agent—an impurity added to a pure substance to produce a deliberate change—and, so far, the industry has relied on cadmium chloride. Cadmium is a dangerous metal, toxic if swallowed, fatal if inhaled and linked by some researchers to breast cancer, cardiovascular disease and even gout. It isn’t very good for aquatic life either.

Cadmium telluride is a stable salt and safe to handle, but cadmium chloride separates in solution into cadmium and into chlorine, another toxic substance. So manufacturers have the extra expense of safety during production, and then of safe disposal of waste.

Dr. Major and his team at the university’s Stephenson Institute for Renewable Energy are competitors in a worldwide search for ingenious ways to exploit renewable energy and reduce fossil fuel emissions.

They started this latest research by considering what it was about the cadmium chloride that made it effective, and then whether some other salt might serve the same purpose. They found that magnesium chloride had some of the same important physical properties, and then tested it.

“If renewable energy is going to compete with fossil fuels, then the cost has to come down,” Dr. Major said. “Great strides have been made, but the findings in this paper have the potential to reduce costs further.”