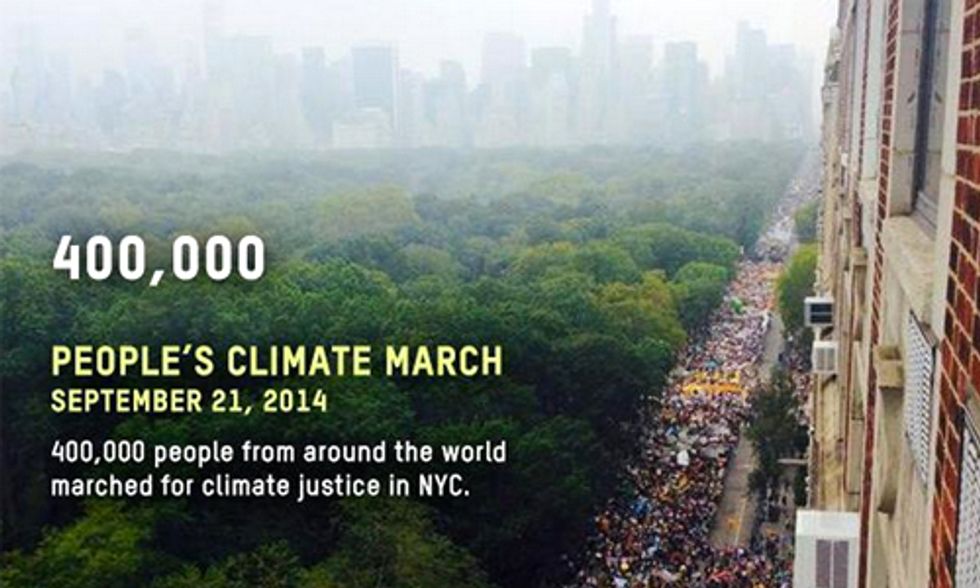 The slogan of the 300,000+ People’s Climate March that rolled over Manhattan like a tsunami yesterday, “To change everything we need everyone” was embodied not only in the raw numbers—larger than the 1963 March for Jobs and Justice led by Martin Luther King—but also in the incredible diversity of the crowd and the organizations participating, and the careful structuring of its building blocks.

There were separate staging and rallying locations for front line communities, labor, churches and civic groups, anti-mining, drilling and fracking activities, environmentalists pursuing climate solutions like renewable energy. Put together these blocks told a story—of the way in which each one of these tribal communities can be part of a bigger climate movement. The media coverage, of course, missed the granularity of this organizing structure—but couldn't help be influenced by it. The lead voice in the New York Times story was not Bill McKibben, Al Gore or Ban ki-Moon, but Carol Sutton of the Connecticut teacher’s union.

But while the entire story didn't make it onto the front page, it was laid out intentionally and clearly for the 300,000 participants—making this rally far more of an educational and explanatory exercise than any protest march I've previously witnessed.

The Secretary General’s act in joining this march—whose expressed purpose was to apply pressure to the nations gathering at the UN Climate Summit this week—was still extraordinary and unprecedented, as well as alarming. In effect, he was publicly calling out his bosses, the UN member nations, for inadequate leadership on climate.

Underneath it all, making this day possible, was the terrible tragedy of Hurricane Sandy. Sandy has impacted this metropolitan region far more deeply than similar climate tragedies in other regions, making a climate movement a reality here more deeply even than in ostensibly greener California. I can’t for example, imagine a climate rally in San Francisco in which a building super, representing SEI Local 32BJ, proclaimed that every building his colleagues come into they find ways to reduce energy consumption.

But while consciousness and nascent movement building are deeper here than in California, policy lags. So my guess is that Mayor Bill DeBlasio’s announcement that NYC would cut emissions 80 percent by 2050 will only be the first of a series of climate solution milestones to come out of this region.

The People’s March is not the only fertile idea spawned by Ban ki-Moon’s decision to call this summit. Cornell’s school of labor relations hosted a deep dive by global trade leaders into the question of how the coming transition from the age of fossil fuels to the age of clean energy can be made democratic and publicly accountable in a way that coal and oil never were. C40, the global consortium of major cities working on climate chaired by former Mayor Michael Bloomberg, hosted a glittering awards ceremony to showcase the best ideas emerging from urban ingenuity. The 10 winners span the globe. San Francisco’s Zero Waste program is up there with Rio’s Sustainable Cities initiatives and Singapore’s Intelligent Transit.

Cities are, in my view, going to be the game breaker. They will, for the first time, house far more than  half of humanity by 2050; they are enormous energy consumers but not very big producers, the natural gas coming out from under the Dallas-Ft. Worth airport notwithstanding. So the politics of a transition off ever more expensive and dangerous carbon fuels is right for them, and they are the center of knowledge aggregation and connection—the key ingredient to finding ways to meet the world’s energy needs without continuing to mine and release fossil carbon.

So, yes, I think this summit will be seen as a game changer for climate. And the fact that it took place in New York is not accidental.