Tiny Houses: The Wave of the Future? 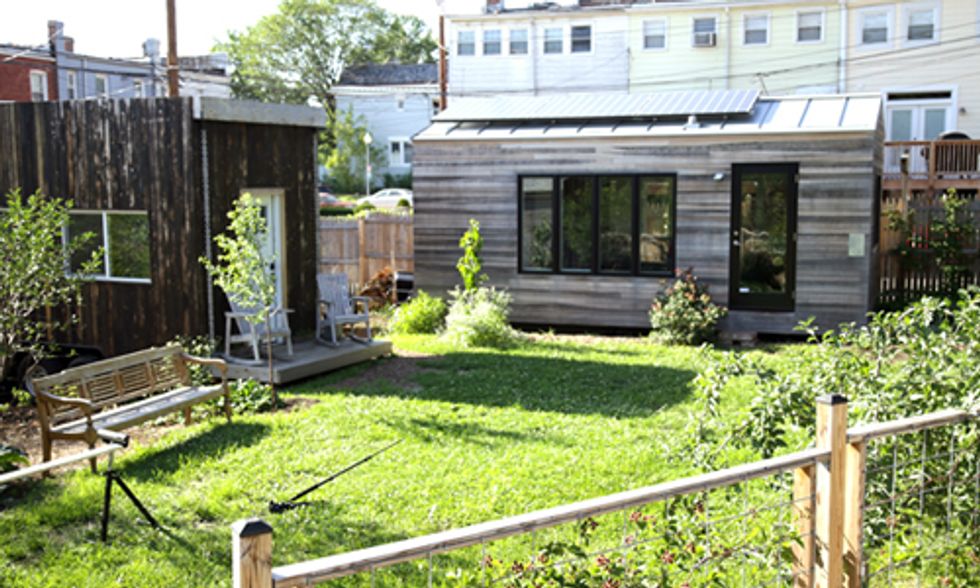 Last month’s well attended climate march in New York City showed that we are finally recognizing the harmful effects of our fossil-fuel driven economy on the planet. Some Americans looking to shrink their carbon footprint are doing so by shrinking their homes, opting to live in ultra-compact houses, often referred to as “tiny houses.”

Increasingly, these small homes are also being considered as models for affordable housing that could serve as a place for the homeless to find some stability and, perhaps, live permanently. In such varied locations as Portland, Oregon, upstate New York, Austin, Texas and Madison, Wisconsin, local advocates for the homeless have constructed communities of tiny houses.

One of the chief benefits of living in a small space (referred to by some who practice it as “micro-living”) is that it’s cheap. An added bonus—and the reason for its initial appeal—is that it’s environmentally sustainable.

The growing popularity of very small houses among the environmentally-minded set is now being called a movement. There are numerous blogs devoted to them. There’s a company that builds and sells them. There’s even a show about them—Tiny House Nation—for those with access to the triple-digit television channels.

But the movement began as an effort by a small group of individuals to shrink their carbon footprint. “The size of your house probably has more to do with how eco-friendly the house is than anything, because you have to heat and cool that space and heating and cooling is what uses most of the energy. So having a small space automatically makes you more eco-friendly,” says Brian Levy, an expert in implementing sustainable energy who has worked with the Department of Energy and has built a model tiny home, called Minim House.

Minim House was started as part of Boneyard Studios, a model tiny house community that existed on a small lot next to a graveyard in Washington, DC, from 2012 until August 2014. (Some of the houses that were part of the community are on wheels and are in the process of being relocated elsewhere, but Levy’s Minim House will stay put.) Even though the land on which they built and gardened was not zoned for residential living (and they could not actually live in the homes they built), Levy and Boneyard Studio’s co-founders hoped a model community would inspire others to take up micro-living, and start a discussion about new forms of affordable housing in DC.

“It was important in terms of addressing bigger issues—trying to showcase these small homes as a sustainable, affordable option for housing,” says Levy. “We have lost half our affordable housing in DC in the last 10 years, so the idea was to propose these micro-houses as one potential solution.”

When Levy finished building his model tiny house, he had spent $65,000. But he estimates that without the cost of labor and some of the more advanced sustainable systems—such as solar panels and rainwater collection and filtration—the home could be built for $30,000.

“If you look at the total costs of a tiny house—$30,000 to $50,000—and if you look at the financing options for that house, that turns into a monthly payment of maybe $300, $400, $500 dollars a month, which is certainly fairly affordable compared to what a lot of housing is going for in a lot of areas these days,” says Levy.

Beyond DC, a number of communities are exploring the viability of tiny houses for the homeless. Carmen Guidi is spearheading one such project in Newfield, New York, a 15-minute drive southeast from Ithaca, in a community called Second Wind Cottages.

Second Wind’s story began a few years ago, when Guidi, an auto mechanic and devout Christian, returned from a trip building homes in Haiti hoping to help those who were living in poverty in his own community.

“I just started to ask around,” he says. “‘Where can I help, what can I do?’ And some people said, ‘Why don’t you go help feed the homeless in Ithaca.’”

At first, he wasn’t even aware that Ithaca had a homeless population, but Guidi soon sought out and befriended the residents of a tent city called “the Jungle.” He brought them food and batteries and helped them find jobs and housing. But when one Jungle resident with whom Guidi had become particularly close committed suicide, he felt he had to do more to help the Jungle residents whom local landlords had refused to house.

Guidi initially invited some men to come live in trailers on his property. But he learned during a frigid Finger Lakes winter that the cost of keeping the trailers heated was unrealistic. So he turned to another solution: small, properly insulated houses.

Through word of mouth and crowd-funding initiatives, Guidi was able to raise $150,000 from local businesses, church groups and strangers and gather a large group of volunteers to build the first six cottages, which he says cost between $12,000 to $15,000 each. The homes sit on a hill behind Guidi’s autobody shop overlooking one of the area’s famous gorges. Eventually, Guidi hopes to build 18 cottages for the homeless men with a community center, then begin work on a second village for homeless women.

A Model to Replicate?

The six houses that Guidi and his team of volunteers have constructed already have residents. Dave Reed is one, and he says the community is helping him beat his alcoholism, which for years kept him from holding onto an apartment. Reed — who says that, before becoming homeless, he worked as a chef at Cornell University—held a series of jobs even while homeless to fund his addiction.

“I was working to drink, yes,” he says. “Drinking to work and working to drink.” But it was not sustainable. “I can’t drink without losing my job. I’m like a country song when I drink, you know?” he says with laugh. “When I drink, I lose things. And usually it’s my place to live, my job, self-esteem, my health. This time it was going to be my dog.”

Moving into one of the Second Wind cottages, where volunteers could drive him to work and Alcoholics Anonymous meetings, helped him to face the demons that kept him drinking. “You’re independent here,” says Reed. “It’s your cottage. It’s got running water, it’s got electricity and it’s got a stove to cook on. You get a sense like you’re living, you’re really living.”

Many in the region are watching Second Wind cottages closely. Svante Myrick, the mayor of Ithaca, is a supporter and says that if the project succeeds, he’ll seek to replicate aspects of it with public financing.

“If we can take the model and replicate what we can—that is, small stand-alone shelters, instead of mass sheltering where it’s hard to keep folks safe and in some cases it’s hard to keep them sober, giving them units where they can actually have a space of their own, that’s warm and secure—I think that’s a model that certainly can be replicated,” he says.

Not a One-Size-Fits-All Solution

Homeless advocates point out that for many homeless people, small homes are not a silver bullet. “The faster you get people into regular, normal housing, the better off you are,” says Nan Roman, the president and CEO of the National Alliance to End Homelessness, a DC-based nonprofit. “Having said that, there’s no reason that [the] regular normal housing they move into couldn’t be tiny. The size is not the issue: It’s really where it is and if it’s integrated into the community and people have adequate support from the community.

“You want housing that is the same as housing other people live in. It needs to meet code and zoning requirements. You need to have a regularized relationship with your landlord and the same protections that other tenants have and those sorts of things. If you’re disabled and you need services, you need access to services, and you certainly don’t want to create substandard communities where people have to go live in order to get assistance.”

Roman says she’d worry if a micro-house community for the homeless were to be isolated from the community at large, without access to the support networks that many need to avoid falling back into homelessness.

Proponents of tiny houses, like Brian Levy, also note that micro-living will not meet every community’s needs for affordable housing. Current models for micro-living wouldn’t make sense for large homeless families, for instance. And large apartment complexes are often more appropriate in cities.

“A lot of folks rightfully say we need more dense multi-family housing, and we agree, absolutely. That needs to be the priority, because it’s cheaper and more efficient from a space perspective,” says Levy. “That said, there’s a lot of empty lots… where you simply can’t do multi-family housing.”

Micro-living does provide one compelling new answer to a daunting problem, and communities around the country are giving it some thought.

“It’s a conversation started around the idea of how do we have more affordable housing in this country?” says Levy. “There’s a lot of different ways, we’re only offering one suggestion—one voice in that conversation.”

Dave Reed, of Second Wind Cottages, is one proponent. “It gives you a sense of dignity,” he says. “It’s a sense of freedom that I haven’t felt before, and I hope a lot of people are able to experience this, not just me.”

Jon Stewart: ‘We Must Do Whatever It Takes to Save American Lives’