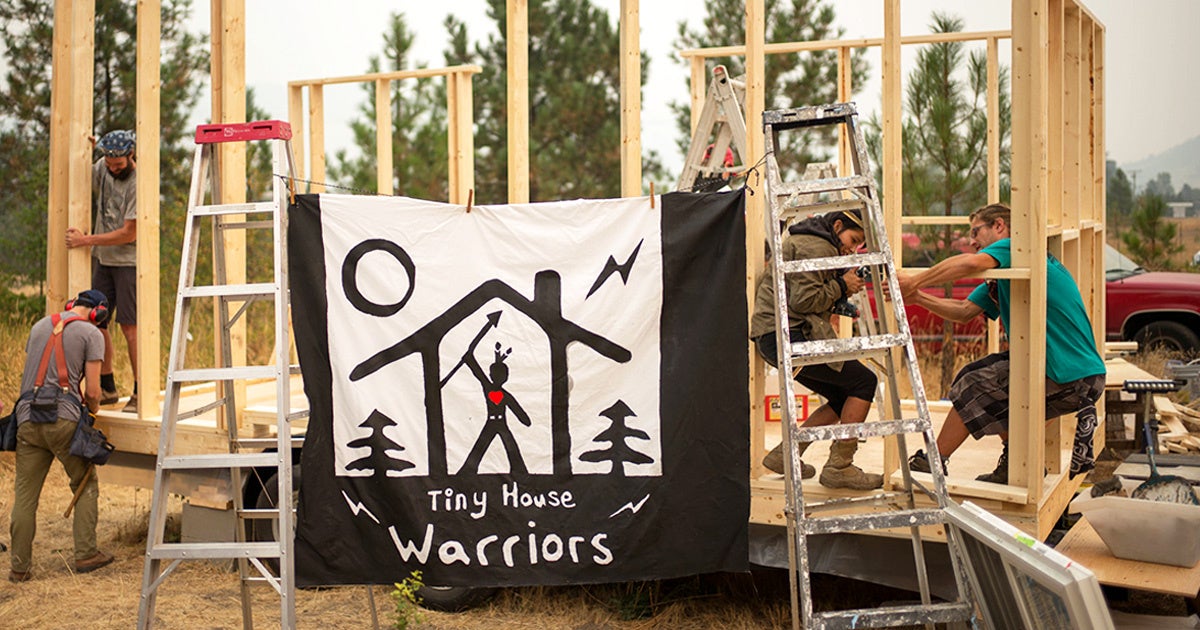 The house is a symbol of the community’s opposition to the pipeline and is based on a design from allies at Standing Rock. The tiny house will be 18 feet by 7 feet by 12 feet, and will feature a hand-painted mural.

“We are building this tiny house and placing it in the path of the Kinder Morgan pipeline to show in no uncertain terms that this land is our home,” said Kanahus Manuel, a leader in the build and member of the Secwepemc Women’s Warrior Society. “As Kinder Morgan tries to force through a pipeline without our consent—risking polluting the land and poisoning our rivers—we are rising up to create a resistance rooted in family, community and hope.”

If built, Kinder Morgan’s pipeline would cross 1,309 bodies of water, including the North and South Thompson Rivers, which are in the community’s traditional territory (the largest Indigenous territory the pipeline plans to cross). Given that a spill is virtually inevitable, the 900,000 barrels of diluted bitumen the pipeline would carry through 518 kilometers of unceded Secwepemc land pose an ongoing threat to the community, its culture, homelands and waters.

“There will be no reconciliation without consent, and we can not confuse consultation with consent,” Manuel continued. “If Trudeau and Kinder Morgan try to rip this land, our home, apart, we will be there to stand-up and stop them. Like our brothers and sisters at Standing Rock, like Indigenous Peoples rising up across Turtle Island, we have a responsibility to protect the land that is home and the water that is sacred.”

“Neskonlith opposes the Kinder Morgan TransMountain tar sands pipeline because of the damage we know it would bring,” Neskonlith Chief Judy Wilson said. “We support the People’s Declaration and the construction of these tiny houses for the use of our people and the enjoyment of our lands. Issues of bitumen being piped across waterways should be everyone’s concerns. We’ve seen with Mount Polley that the provincial and federal governments aren’t ready to deal with a spill and the effects are left for us to deal with for years or decades, we won’t let that happen again.”

Greenpeace Canada partnered with the Tiny House Warriors to build the house, assisting with logistics and supporting their act of nonviolent resistance.

“The Secwepemc Tiny House Warriors are creating community and building homes for their people,” said Mike Hudema, climate and energy campaigner at Greenpeace Canada. “This is why we stand with them—the rightful defenders of their lands and waters in this peaceful and courageous act of defiance. Every step of the way, we will continue to oppose Kinder Morgan and the financial institutions bankrolling this climate-killing, Indigenous rights-bulldozing pipeline.”

In June, the Secwepemc Peoples Declaration on Protecting Our Land and Water against the Kinder Morgan Trans Mountain Pipeline was declared at the Secwepemcul’ecw Assembly. The declaration articulates the community’s lack of consent on the pipeline and reasserts their traditional rights, title and laws, including those which are protected under Section 35 of Canada’s Constitution, the UN Declaration on the Right of Indigenous Peoples, and the legally-binding International Covenants on Civil and Political Rights and Economic Social and Cultural Rights.