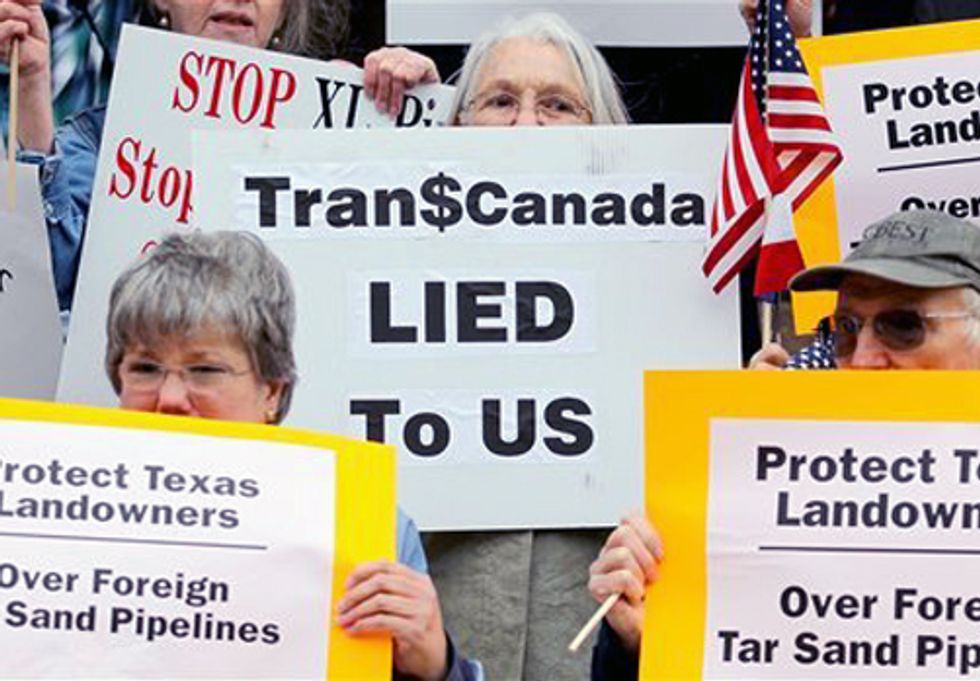 It’s not just a he-said she-said of environmental advocates against TransCanada and the Keystone XL tar sands pipeline. Below, in their own words, TransCanada implicates themselves for saying anything it takes to construct their toxic pipeline.

Sept. 17, 2009: According to TransCanada’s own analysis, the Keystone XL tar sands pipeline will be a boon for corporate profits, but a burden for American consumers.
TransCanada, in testimony to the Canadian National Energy Board, stated, “Existing markets for Canadian heavy crude, principally [the U.S. Midwest], are currently oversupplied, resulting in price discounting for Canadian heavy crude oil. Access to the [U.S. Gulf Coast] via the Keystone XL Pipeline is expected to strengthen Canadian crude oil pricing in [the Midwest market] by removing this oversupply. This is expected to increase the price of heavy crude to the equivalent cost of imported crude.”

Dec. 31, 2009: TransCanada admits Keystone XL would raise gas prices.
TransCanada submitted its first permit application. In the appendix to its application to the Canadian National Energy Board, the company wrote, “A Canadian heavy crude producer is expected to realize an increase in the heavy crude price of approximately $3.00 per barrel by avoiding a discount at the [U.S. Gulf Coast].”

July 21, 2011: TransCanada begins bullying landowners and threatening eminent domain authority.
TransCanada in a letter to Nebraska landowner R. Joe Moller, stated, “This letter is Keystone’s final offer, and it will remain open for one month after the date of this letter or until you reject it.  While we hope to acquire this property through negotiation, if we are unable to do so, we will be forced to invoke the power of eminent domain and will initiate condemnation proceedings against this property promptly after the expiration of this one month period.”

Sept. 9, 2011: Despite its documented bullying, TransCanada now claims that negotiations with landowners have been voluntary and takes credit for successfully appropriating huge chunks of American land.
TransCanada in a press release said, “To date, through direct discussions with affected land owners, Keystone XL has negotiated voluntary easement agreements with over 90 percent of Nebraskan landowners and 95 per cent of those landowners in the Sand Hills.”

Sept. 26, 2011: Alex Pourbaix, TransCanada’s President of Energy and Oil Pipelines, says the route has been “exhaustively analyzed” and claims it would be “next to impossible” to now change it.
Pourbaix in an interview with Postmedia News, stated, “I reminded the governor that this route has been exhaustively analyzed…It would be next to impossible to go back and suggest that any of those inferior routes [be taken].”

According to the Financial Post, “TransCanada contends it would be unacceptable for Nebraska lawmakers to pass ‘after the fact’ legislation to force changes to Keystone XL’s route if it is approved at the federal level.”

Pourbaix claimed, “I think the likelihood of that occurring is very slim…What possible new information would be gained by having a state-level siting review?”

Oct. 11, 2011: Pourbaix meets with Nebraska State Senators and once again claims that moving the route would “jeopardize the project.”
Pourbaix at a meeting with Nebraska State Senators said, “We understand that the best solution from your perspective is to move the route. We don't believe that is an option for us…the Sandhills are a challenge, but pipelines are built where there is surface water all the time.”

With regards to passing a pipeline siting law: “To do it now seriously jeopardizes the project.”

Oct. 18, 2011: Pourbaix, again, deems moving the route “impossible.”
Pourbaix in a letter to Nebraska State Senators Dubas, Langemeier and Sullivan, wrote, “As we discussed in the meeting, at this late date in the federal Presidential Permit process, it is impossible for us to move the route to avoid the Sandhills.”

Nov. 29, 2011: TransCanada CEO, Russ Girling, admits that re-routing the pipeline is easy.
As told to Bloomberg, “TransCanada Corp. may be able to win approval of its Keystone XL pipeline in six to nine months as the company negotiates with Nebraska and U.S. officials over a new route, Chief Executive Officer Russ Girling said.”

Said Girling, “We can re-route this pipeline quite easily.”

Dec. 2, 2011: Pourbaix can’t promise that the pipeline won’t be for foreign export.
When pressed by Congressman Ed Markey (D-MA) to guarantee that the Keystone pipeline would not be for foreign export, Pourbaix testifies before  the House Energy and Commerce Committee that “In many ways, I can’t do that because I am merely the shipper of this oil and that is a question…” When asked to make it a condition of their agreement with their shipping companies, Pourbaix replied, “No, I can’t do that.  We’ve already agreed to our shipping arrangements.”

Today, the Natural Resources Defense Council and Bold Nebraska highlight TransCanada's claim that the Keystone XL tar sands pipeline will be the “safest, most advanced pipeline ever built in North America”—while pointing to its leak detection system as proof positive of that claim. But a new investigation by Inside Climate News shows that the spill detection sensors are far less accurate than landowners are led to believe.

“For years, TransCanada, the Canadian company that wants to build the Keystone XL pipeline, has assured the project's opponents that the line will be equipped with sensors that can quickly detect oil spills.

“But an InsideClimate News examination of 10 years of federal data shows that leak detection systems do not provide as much protection as the public has been led to believe.

“Between 2002 and July 2012, remote sensors detected only 5 percent of the nation's pipeline spills, according to data from the Pipeline and Hazardous Materials Safety Administration.

“The general public reported 22 percent of the spills during that period. Pipeline company employees at the scenes of accidents reported 62 percent.

Anthony Swift, an attorney who has spent years researching pipeline safety for the Natural Resources Defense Council, was taken aback by the findings. Swift's organization opposes the Keystone XL, and he said he had always known that leak detection systems didn't catch most of the spills. But "the fact that 19 out of 20 leaks aren't caught is surprising, and certainly runs counter to a lot of rhetoric we hear from the industry," he said.