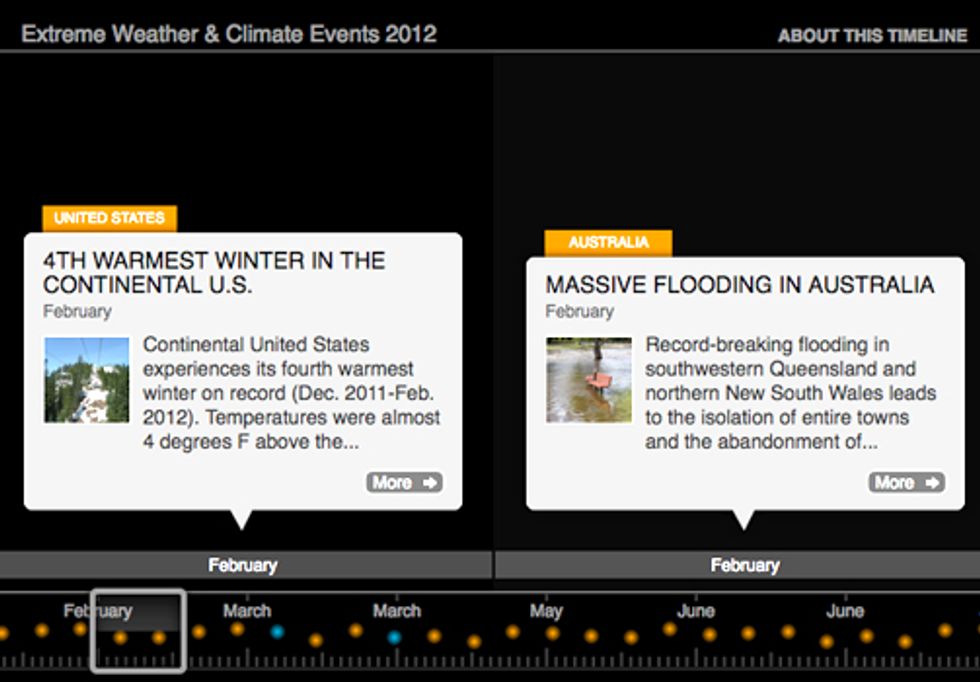 Over the past several months, extreme weather and climate events in the form of heat waves, droughts, fires and flooding have seemed to become the norm rather than the exception. In the past half-year alone, millions of people have been affected across the globe–from Europe suffering from the worst cold snap in a quarter century; to extreme flooding in Australia, Brazil, China and the Philippines; to drought in the Sahel. Records have been broken monthly in the continental United States, with the warmest spring and 12-month period experienced this year and severe fires and drought affecting large swaths of the country.

So how bad has it really been? The World Resources Institute has put together a timeline of extreme climate and weather events in 2012. This is not a comprehensive listing of every event, but an attempt to compile the most significant events of the year.

Many people are asking whether climate change can explain the recent spate of extreme events. While the timeline is not an attempt to perform analysis connecting any of these events to climate change, many of these occurrences are in line with what scientists have predicted in a warmer world. Plus, the science of attributing extreme events to human-induced warming has improved significantly. This evolving science is documented on the timeline as well.

It’s too early to tell how the rest of the year will take shape, and it’s true that every year is marked by floods, droughts, heat waves and other extreme events. However, these past months are unusual in that numerous records have been broken around the world.

What we do know is that many extreme events will increase in severity and intensity if we continue on our carbon-intensive pathway. While it’s too late to reverse the course of past extreme events, there is much we can do–and must do–if we are to stop fueling the intensity and severity of our changing climate.