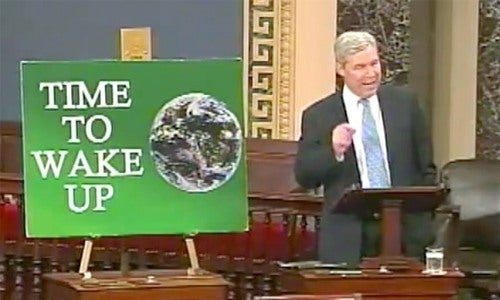 For the past three years, Sen. Sheldon Whitehouse of Rhode Island has been doing a weekly speech, “Time to Wake Up” on the Senate floor to urge his fellow members of Congress to take action on climate change. Yesterday’s speech was the 100th such speech in his weekly installment, which started on April 18, 2012.

“Opponents of responsible climate action do best in the dark,” Whitehouse said. “I knew that if anything was going to change, we’d need to shine some light on the facts, on the science and on the sophisticated scheme of denial being conducted by the polluters. I decided to come to the floor every week the Senate is in session, to put at least my little light to work, to urge colleagues to wake up and take action.”

Whitehouse calls out his fellow Senate members for being “shut down by the fossil fuel industry. The polluters have constructed a carefully built apparatus of lies propped up by endless dark money.”

Watch Sen. Whitehouse explain why we need to act on climate now in his 100th speech: