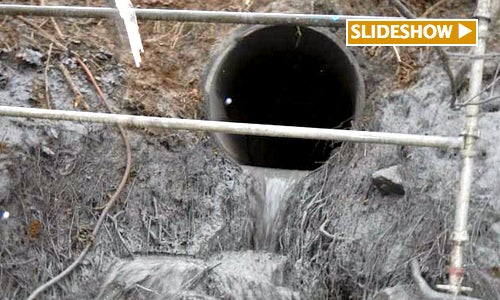 North Carolina, home to more high-hazard coal ash impoundments than any other state, has been ground-zero for coal-ash issues for years … long before the lawsuits began to fly. That’s probably because the state’s largest city, Charlotte, is home to the nation’s largest energy producer and anti-coal-ash-regulation lobbyist, Duke Energy.

The city is also home to former Duke Energy employee and current state governor Pat McCrory as well as a drinking water reservoir with two unlined, high-hazard, leaking coal ash ponds that have been proven—as have the Dan River plant’s waste ponds—to be contaminating groundwater.

To suggest that the government and the company have been involved in an incestuous affair for nearly a century is putting it mildly, so it’s no surprise to me that the federal government is now investigating the state’s handling of Duke Energy’s latest coal ash spill into the Dan River, even as the North Carolina Department of Environment and Natural Resources (DENR) has backed away from a third deplorable settlement with the company over its coal-ash mess. What is amazing is that the agency is developing a coal ash “task force” to study the issue again in lieu of forcing the company to adhere to state and federal laws.

“It is sad and remarkable that DENR’s response to the Dan River spill is to form a committee,” says Frank Holleman, an attorney with the Southern Environmental Law Center which is involved in the coal ash lawsuits against the company. He also pointed out that the state has years of data on coal ash pollution and has testified under oath that the company’s pollution is illegal and a serious threat to the public and clean water.

The call for a task force comes a week after both the state of North Carolina and the city of Danville, VA, admittedly relied on Duke Energy’s “sketchy” post-spill reporting and water quality testing to soothe public fears over water pollution; those test results were from one of the company’s private labs.

The day DENR announced its task force, Duke Energy inspected a second pipe beneath its Dan River coal ash ponds. It took state inspectors two days to actually watch the video taken by the company of the interior of the pipe. The next day, Tracy Davis, director of the North Carolina Division of Energy, Mineral and Land Resources, sent a letter to Duke Energy demanding that the company submit an action plan within 10 days detailing its plan to repair the failing pipe he cited as “leaking,” writing “water jets from pressurized infiltration (termed “gusher” in the video) were observed …”

It wasn’t until 7:30 p.m. on Valentine’s Day that DENR alerted the media, and thus the public, of the second failing pipe.

Even the U.S. Environmental Protection Agency (EPA) admitted at a public meeting on Feb. 11 that it is working with the company on a solution, not enforcing the state laws Duke Energy is violating or even the federal government’s laws—such as the Clean Water Act and the Endangered Species Act which, according to a U.S. Fish and Wildlife employee who spoke at the same meeting, the company may also be violating.

The state’s newest delay tactics and calls for more time to study the problem are less than comforting; those coal ash impoundments have already been studied ad nauseum and found harmful to both human health and the environment. How much more evidence do we need to prove once and for all that Duke Energy is illegally and continually polluting North Carolina’s waterways?

For decades the state of North Carolina has shielded Duke Energy when it comes to coal ash pollution even as the company’s own reporting data has proven that its waste ponds—which can also include chemicals and raw sewage—have contaminated groundwater beneath many of its coal ash ponds in the state. The company’s ponds have also already endured a thorough assessment by the EPA in 2009 and DENR assessments that led to high-hazard ratings for many of the ponds. And still coal companies like Duke Energy are allowed to self-monitor groundwater monitoring wells—wells the industry promised the EPA it would install in 2000 via an agreement that left coal ash federally unregulated.

Guess when the groundwater wells at the coal ash ponds were sunk at the company’s Riverbend plant—the one that pollutes Charlotte’s drinking water all day every day? December 2008, the same month as the Tennessee Valley Authority’s devastating disaster made coal ash famous. More than five years later, that spill is still being cleaned up.

The state has also protected the company—not the people—from coal ash pollution issues by exempting, until 2010, the structures that hold the waste in its towering impoundments. Those earthen dams were exempt from the state’s Dam Safety Act of 1967 and regulated by the N.C. Utilities Commission, under the umbrella of the state Department of Commerce—not DENR, a beleaguered agency that has lost a significant number of staff members (some quite publicly) under McCrory’s administration, which altered the agency’s mission statement to focus on customer service.

This past summer, I asked DENR spokesperson Drew Elliot who the department’s customers are, he said, “regulated communities.” Then he added “environmentalists.” And then, after a long pause, he said, “and anyone else the agency touches.” Before that, he told me, “There was a big feeling in the business community that we had an adversarial relationship (with them). DENR was deemed the number one enemy of business and had a huge target on its back because of that.”

Rep. Pricey Harrison (D-Greensboro), who wrote the 2010 legislation that forced Duke Energy to install more groundwater monitoring wells, have third-parties inspect its dams every two years instead of every five and moved regulatory authority to DENR, described the North Carolina General Assembly as an “antagonistic environment for environmental regulations.”

That doesn’t leave much hope for the latest legislative promise, this time from state senator Tom Apodaca (R-Henderson), to force a cleanup.

The company did issue an apology promising to right the situation five days after the Dan River spill began, but if it really wants to convince citizens of North Carolina it’s the good neighbor it proclaims itself to be the company will stop all of this nonsense right now and clean up its mess before another more serious coal ash spill happens in a more populated place, like Charlotte.

The company set the precedence itself: In the 1950s, the coal ash ponds were installed in an effort to prevent air pollution, long before the Clean Air Act. Even now, the company is helping the city of Eden, NC, the site of its recent spill, by upgrading its water treatment facility because of pollution from its Belews Creek plant’s coal ash impoundments, which are also on the Dan River.

When Duke Energy spokeswoman Erin Culbert was asked if the company was helping the city of Eden without the prompting of regulation or legislation, she responded, “Yes. That’s correct.”

“The recent Dan River disaster demonstrates that immediate action is necessary,” Holleman says, pointing to South Carolina as an example, “where coal ash is being removed from dangerous, leaking coal ash lagoons.”

The “immediate action” of moving forward with clean-ups at every one of the company’s coal plants may be mired in politics and ineptitude at the state and federal level, but such a move is well within the purview of no-federal-tax paying, multi-billion-dollar corporation like Duke Energy and should be an ongoing demand from the company’s shareholders and customers.