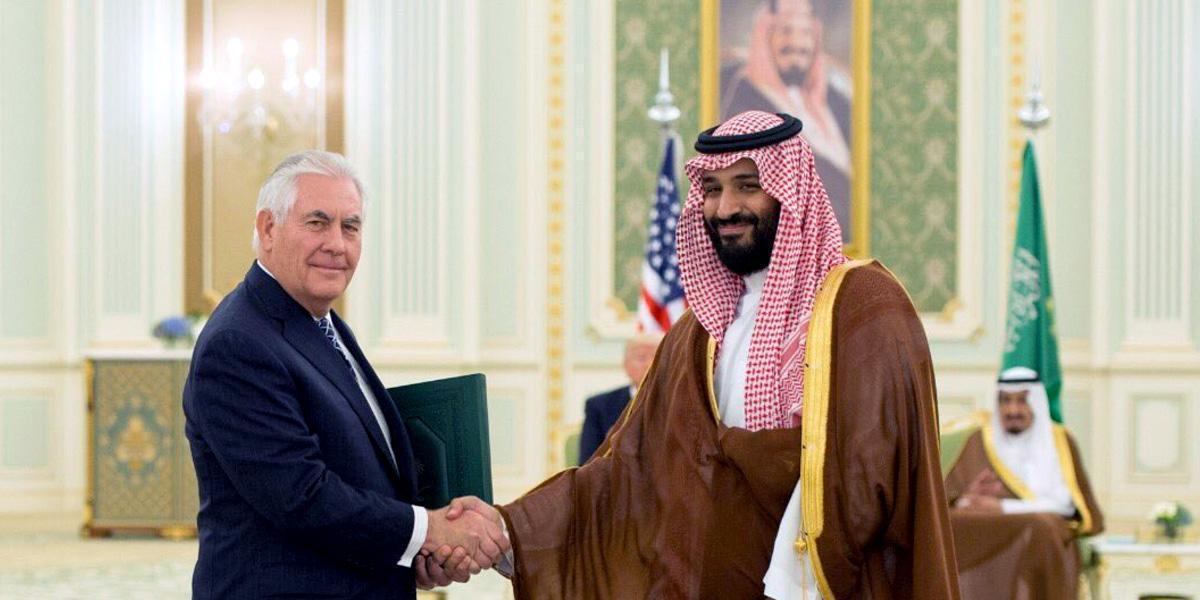 During his recent trip to Saudi Arabia, President Donald Trump announced an array of economic agreements between the U.S. and the Middle Eastern kingdom, saying it would usher in “jobs, jobs, jobs” for both oil-producing powerhouses.

While the $350 billion, 10-year arms deal garnered most headlines, a lesser-noticed agreement was also signed between ExxonMobil and the state-owned Saudi Basic Industries Corporation (SABIC) to study a proposed co-owned natural gas refinery in the Gulf of Mexico. Under the deal, signed at the Saudi-U.S. CEO Forum, the two companies would “conduct a detailed study of the proposed Gulf Coast Growth Ventures project in Texas and begin planning for front-end engineering and design work” for the 1,300-acre, $10 billion plant set to be located near Corpus Christi, Texas, according to an ExxonMobil press release.

In addition, ExxonMobil’s press release for the agreement mentions that Darren Woods, the company’s CEO, was in the room for the signing of the pact alongside ExxonMobil Saudi Arabia CEO Philippe Ducom and SABIC executives. Missing from that release: After the forum ended, Woods went to the Al-Yamamah Palace for an agreement-signing ceremony attended by both President Trump and recently retired ExxonMobil CEO and current U.S. Sec. of State Rex Tillerson.

DeSmog discovered they were all present at the palace via the Saudi Press Agency’s English-language press Twitter account, which released a series of photos of Woods and Tillerson shaking hands with SABIC CEO Yousef Al-Benyan and Saudi Defense Minister Prince Mohammad bin Salman, respectively. President Trump is seen seated in the background of the photos of both Woods and Tillerson, which were taken in the same room.

Signing ceremony of a number of agreements and investment opportunities in presence of King Salman and President Trump#RiyadhSummit #SPAGOV pic.twitter.com/TyWTAF6D0k

As in the ExxonMobil press release, White House and State Department press releases failed to mention that Tillerson and Woods were both present when the deals were signed between the two countries at the Royal Court. Getty Images also published the photo of Woods at the Al-Yamamah Palace, with Trump seated in the background.

Tillerson served as CEO of ExxonMobil for 10 years, heading the “private empire” until President Trump nominated him as U.S. Secretary of State in December 2016. At his January Senate confirmation hearing, Tillerson said he would recuse himself for one year from ExxonMobil-related business which comes before the State Department, and submitted a letter to the same effect on Jan. 3 to the State Department’s Office of Legal Counsel.

“For a period of one year after my resignation from ExxonMobil, I will not participate personally and substantially in any particular matter involving specific parties in which I know that ExxonMobil is a party or represents a party, unless I am first authorized to participate, pursuant to 5 C.F.R. § 2635.502(d),” wrote Tillerson in the letter.

The statute of U.S. law laid out by Tillerson in his letter, 5 C.F.R. § 2635.502(d), dictates what steps federal employees should take if they have potential business conflicts or impartiality issues pertaining to U.S. government business.

“Where an employee knows that a particular matter involving specific parties is likely to have a direct and predictable effect on the financial interest of a member of his household, or knows that a person with whom he has a covered relationship is or represents a party to such matter, and where the employee determines that the circumstances would cause a reasonable person with knowledge of the relevant facts to question his impartiality in the matter, the employee should not participate in the matter unless he has informed the agency designee of the appearance problem and received authorization from the agency designee,” the law reads.

At his Senate confirmation hearing, Tillerson echoed the remarks made in his recusal letter with regards to State Department business potentially overlapping with that of ExxonMobil.

“If confirmed as secretary of state, I would recuse myself from those issues,” Tillerson said at his confirmation hearing. “I’ve made clear in my disclosures, and I think in answers to questions that have been posed, that obviously there’s a statutory recusal period, which I will adhere to, on any matters that might come before the State Department that deal directly and specifically with ExxonMobil.”

Woods, the Exxon CEO who took Tillerson’s spot at the top of the company, was in Saudi Arabia at the same time as the Trump administration, apparently both to sign the agreement with SABIC and lead a roundtable at the inaugural Saudi-U.S. CEO Forum on business “Partnership Enablers.”

The forum, attended by U.S. Sec. of Commerce Wilbur Ross, “drew the kind of corporate firepower Trump suggested he could harness when he ran for the Oval Office as a Washington outsider/business executive who would reach outside the Beltway and enlist other executives in support of the administration’s economic goals,” wrote Bloomberg.

“More than 30 CEOs of major U.S. companies were on hand for the summit, at the Four Seasons Hotel in Riyadh. Some later joined Trump and Saudi officials at the Royal Court Palace for a deal-signing ceremony.”

“Bizarre Art of the Deal”

Gulf Coast Growth Ventures, known in industry lingo as a “cracker” facility, is set to refine natural gas obtained via hydraulic fracturing (“fracking”) from Texas’ Eagle Ford Shale and other shale basins into plastics materials. It received billions of dollars in tax subsidies from local government bodies in Texas. When built and fully functioning, Gulf Coast Growth Ventures will be the largest cracker facility on the planet.

Tillerson, as previously reported by DeSmog, maintained close ties between ExxonMobil and Saudi Arabia during his tenure as CEO. The State Department did not respond to a request for comment pertaining to Tillerson’s trip to Saudi Arabia and interaction with current Exxon CEO, Darren Woods, but maintained to DeSmog that Tillerson has upheld his ExxonMobil recusal and divestment agreement (in which Tillerson sold away his stock holdings in the company) as Secretary of State.

“Most troubling of all was Tillerson’s presence and role in accommodating Exxon’s deal with the House of Saud, thereby violating the former CEO’s recusal agreement. Trump and Tillerson’s Riyadh embarrassment is just another sad indication of the administration’s prioritization of crony corporate access masquerading as a jumbled assembly of foreign policy and economic development.”

The White House did not respond to a request for comment.