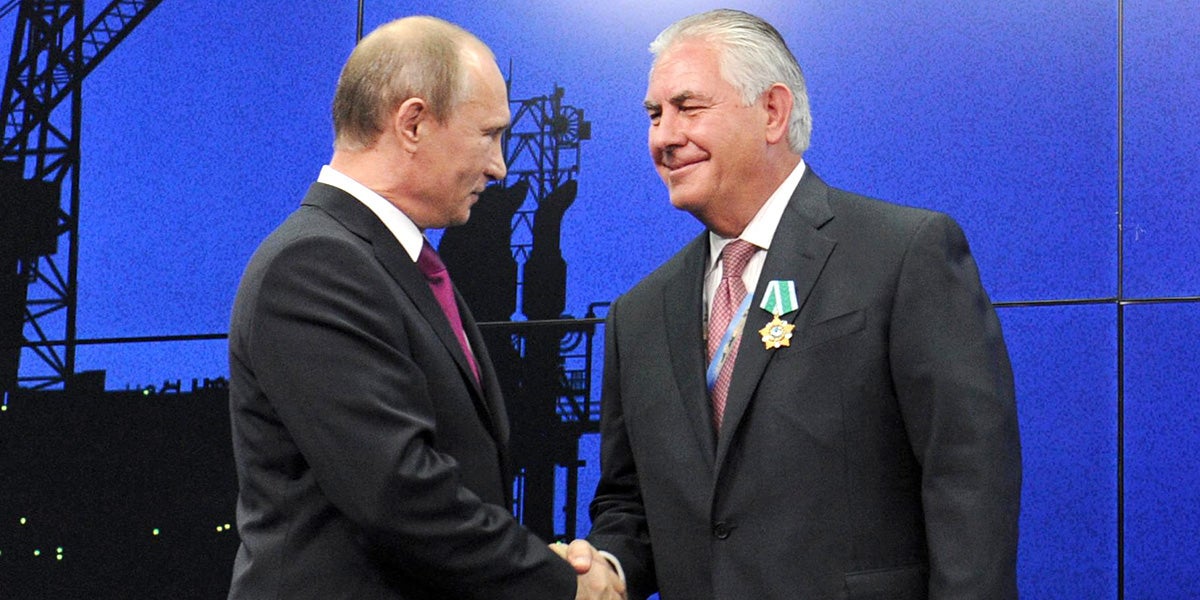 There could be fireworks on Capital Hill today when Democratic members of the Senate Foreign Relations Committee finally grill Rex Tillerson on his potential nomination as Secretary of State.

Tillerson may also face hostile questioning from Republican Sen. Marco Rubio, who if he votes with the Democrats could block Tillerson’s nomination. The committee currently stands at 10-9 between Republicans and Democrats.

Here are some of the issues that might have Rex on the ropes:

Much has been written recently about Exxon‘s decades long denial of climate change. For decades Exxon poured tens of millions into the climate denial movement. The company is under a criminal investigation now for lying to the public and share-holders. It is the scandal which is known as #Exxonknew. It is hard for Tillerson to extract himself from his old employer’s deceit and denial.

Later this month, he is also due to testify in a lawsuit brought by 21 young people alleging that Exxon and other companies has tried to prevent U.S. government from taking action on climate change.

After approximately three months, the “soldiers took off his blindfold, took him outside the building where he had been detained and showed him a pit where there was a large pile of human heads. The soldiers threatened to kill him and add his head to the pile.”

Exxon has fought the case for 15 years.

4. A Patriotic American or Putin’s Puppet?

Again much has been written about Tillerson’s links to Putin. All the indications are that Tillerson will be Putin’s puppet in the U.S.; pushing for sanctions to be lifted which will benefit Putin and his old company Exxon.

Exxon is desperate to get into Russia’s Arctic. As the Financial Times reported in 2014, “Russia was going to be Exxon’s next mega-area. And the list of mega-areas in the world is very short.” Then came sanctions which Russia tried to flout. Despite sanctions, Tillerson sent an Exxon executive to a Russian business forum last year.

Exxon did business with Iran, Syria and Sudan through a European subsidiary at the same time as these countries were under U.S. sanctions as state sponsors of terrorism.

As I wrote about earlier this week, Tillerson has so many investments that he cannot possibly operate without a conflict of interest, if he becomes Secretary of State. He “will be a walking disaster zone waiting to happen.”

Tillerson says he will divest from 156 different entities within 90 days too. Some conflicts will be avoided, but many will not.

7. No Experience as a Diplomat

Tillerson is the first Secretary of State to have no experience in the public sector which is seen as a first in modern U.S. history.

Numerous politicians and commentators have raised concerns: He may be great at doing oil deals, but “has no proven knowledge or regard for the norms and necessities that so much of our modern diplomatic and security efforts depend upon,” said Democratic Sen. Bob Menendez of New Jersey.

“Mr. Tillerson has demonstrated he knows the corporate world and can put his shareholders’ interests first, but can he be a respected Secretary of State that puts the national security interests of the American people first? It remains to be seen,” US Senator for Maryland and ranking Democratic committee member Ben Cardin, also said last month.

Steve Coll, author of Private Empire: ExxonMobil and American Power, added: “Yet it is hard to imagine, after four decades at ExxonMobil and a decade leading the corporation, how Tillerson will suddenly develop respect and affection for the American diplomatic service he will now lead, or embrace a vision of America’s place in the world that promotes ideals for their own sake, emphatically privileging national interests over private ones.”

Indeed, as Raymond C. Offenheiser, the president of Oxfam America noted “Conducting business abroad is no substitute for a track record in strong and principled diplomacy for U.S. interests and values. We look forward to hearing Tillerson address how he would fill the gaps in his resume and explain how exactly an oilman becomes a statesman overnight.”

Oilman or Statesman? Its time for the Senate to find out.