Tillerson Called Out for ‘Lying About Climate’ During Confirmation Hearing 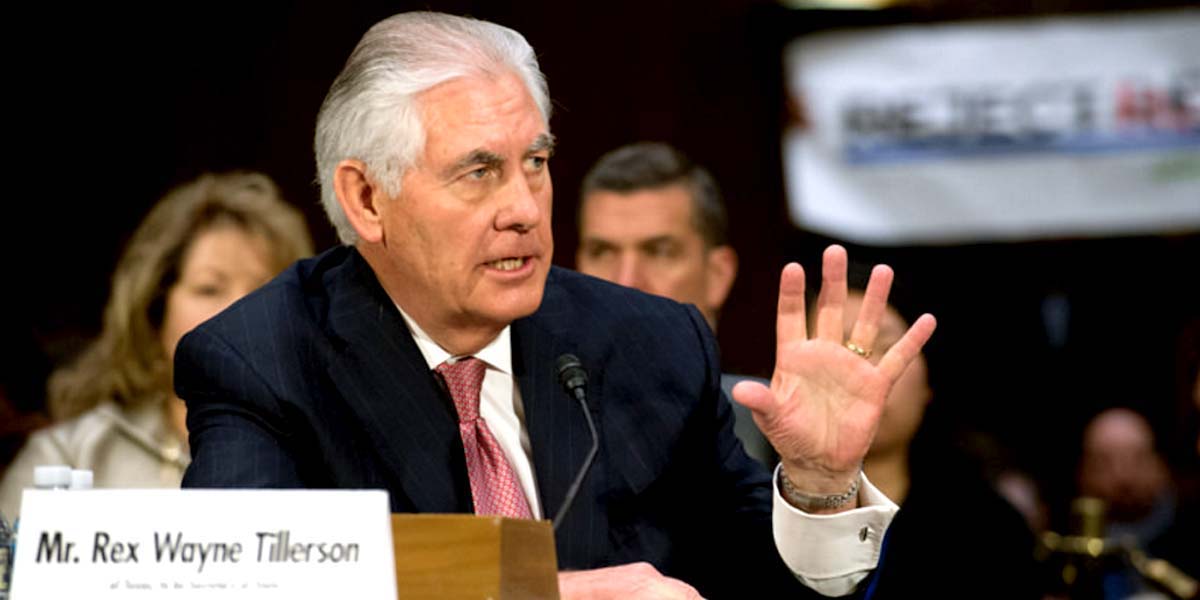 At his senate confirmation hearing on Wednesday, U.S. Secretary of State nominee Rex Tillerson dodged questions about ExxonMobil’s long history of denying climate science, lending credence to claims his tenure would be a disaster for the planet.

When pressed by Sen. Tim Kaine (D-Va.) about the major charges unearthed by the ongoing ExxonKnew investigation—namely, that the oil company hid evidence going back to the 1970s of how the burning of fossil fuels impacts the climate, and funded misinformation campaigns to spread skepticism about growing scientific consensus—former Exxon CEO Tillerson “essentially pled the fifth,” said Oil Change International executive director Stephen Kretzmann.

“Since I’m no longer with ExxonMobil, I’m in no position to speak on their behalf,” said Tillerson, who recently separated from the company after 42 years. “The question would have to be put to them.”

Tillerson responded: “A little of both.”

“Tillerson is still lying about what Exxon knew about climate change,” said 350.org executive director May Boeve, whose group organized a 200-strong anti-Tillerson protest outside the hearing on Wednesday. “Asked directly about the company’s climate cover-up, Tillerson demurred and denied. We need a secretary of state who acknowledges that the climate crisis requires bold action, not an oil industry CEO who is dedicated to spreading misinformation.”

Added Carroll Muffett, president of the Center for International Environmental Law: “The universe of subjects Rex Tillerson knows, admits to knowing, or is permitted to speak to is vanishingly small for someone who would be the U.S. voice to the world. Listening to his hearing, it would be easier to conclude Tillerson is under criminal investigation than under consideration for secretary of state.” 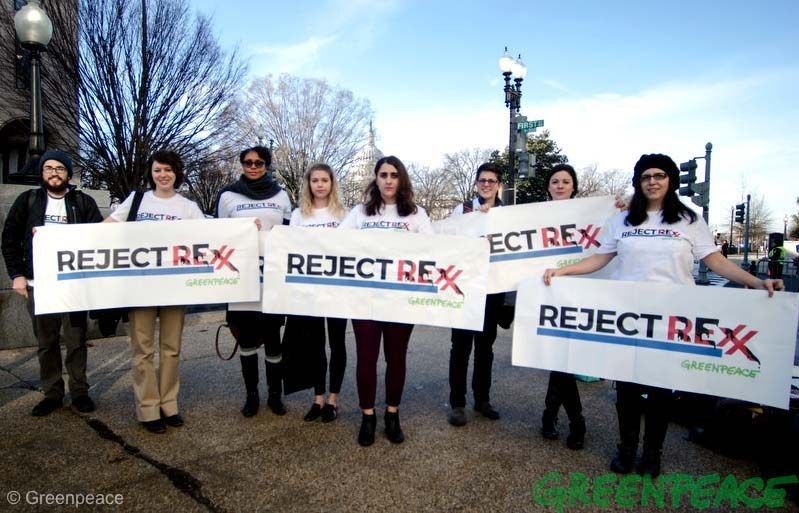 Greenpeace activists hold banners reading “Reject Rexx” outside the United States Capitol in Washington, D.C., January 11, 2017, before the start of a confirmation hearing on the nomination of former ExxonMobil CEO Rex Tillerson for Secretary of State in the incoming Donald Trump administration.Pat Ryan / Greenpeace

Meanwhile, InsideClimate News reporter Neela Banerjee noted that “Tillerson answered questions about whether the United States would remain in the Paris climate accord in a such a non-committal way that he left open the possibility for the Trump administration to ditch the agreement or pull out of the U.N. Framework Convention on Climate Change (UNFCCC), as some of the President’s team have recommended.”

And when questioned about whether human activity is contributing to climate change, Tillerson also failed to give a straight answer.

“The increase in greenhouse gas concentration in the atmosphere are having an effect,” he told the Senate Foreign Relations Committee. “Our ability to predict that effect is very limited.”

In fact, Banerjee wrote, “[t]hat’s incorrect. Climate scientists have gotten an increasingly fine-grained view of the effects climate change is having and could have, including longer and more intensive heat waves and droughts, sea level rise and its impact on coastal communities, loss of species, increase in pests, and constrained water resources.”

ExxonMobil itself has for decades been preparing for “rising sea levels, warming temperatures and increasing storm severity” caused by climate change, as the Los Angeles Times reported in its 2015 ExxonKnew investigation.

“If after 40 years of climbing up the company ladder and 10 years at the helm, Tillerson ‘lacks knowledge’ about ExxonMobil corporate strategy on climate change—including its role in spreading climate disinformation and funding denial groups—then he should have been fired as CEO long, long ago,” declared Kathy Mulvey, climate accountability campaign manager for the Union of Concerned Scientists. “And as someone who continues to disparage climate models, he is unfit to lead the U.S. and world on climate action.”