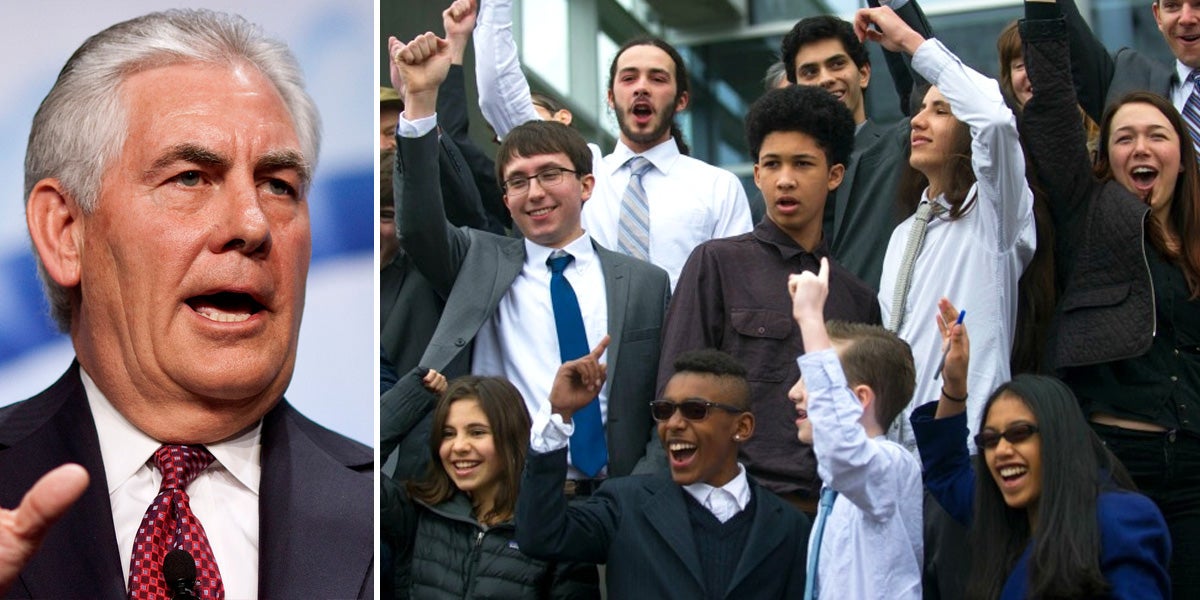 The notice seeks Tillerson’s testimony by way of deposition on Jan. 19, 2017, in Dallas, Texas. The notice was served on Sidley Austin, the law firm representing three defendants in the constitutional climate lawsuit: American Petroleum Institute (API), National Association of Manufacturers (NAM) and American Fuel & Petrochemical Manufacturers (AFPM). In his deposition, Tillerson will be asked questions about his knowledge relevant to the youths’ claims that their constitutional rights have been violated.

As CEO of ExxonMobil, Tillerson has unique personal knowledge of the fossil fuel industry’s historical relationship with the federal government. Tillerson and Exxon also have been important leaders in API, NAM and AFPM—the trade associations that joined the federal climate lawsuit as defendants. Tillerson serves on the board of API and he and other Exxon executives also serve on the board of NAM. The youth plaintiffs seek to prove these trade associations have known about the dangers of climate change since the 1960s and have successfully worked to prevent the government from taking the necessary steps to fully address climate change.

“I was shocked when students at Columbia Journalism School uncovered ExxonMobil’s deep knowledge of climate change as early as the 1970s,” Alex Loznak, 19-year-old plaintiff and student at Columbia University, said. “What’s even more disturbing is that the Federal Government firmly knew about climate change in the 1950s. I look forward to working on our research team in the months ahead to establish the depth and breadth of the government and industry’s knowledge of climate danger before trial.”

The young plaintiffs sued the federal government for violating their constitutional rights to life, liberty and property, and their rights to vital public trust resources, by locking in a fossil-fuel based national energy system for more than five decades with full knowledge of the extreme dangers it posed.

“We believe the evidence shows both ExxonMobil and the fossil fuel industry knew about the threat to our country posed by climate change and worked to encourage the federal government to enable emissions of more greenhouse gas,” declared Philip Gregory, counsel for the plaintiffs and a partner with Cotchett, Pitre & McCarthy. “Mr. Tillerson’s testimony is crucial to understanding what the fossil fuel industry did to prevent the government from fully addressing this problem. The youth of America need to know the truth on how companies such as ExxonMobil continue to use the government to cause horrific harm to our nation’s most vulnerable people.”

Through a federal court order issued on Nov. 10, the young plaintiffs have already secured the following critical legal rulings in this case:

1. There is a fundamental constitutional right to a climate system capable of sustaining human life.

2. The federal government has fiduciary public trust responsibilities to preserve natural resources upon which life depends.

3. The youths’ requested remedy (ordering the development and implementation of a national climate recovery plan based on a scientific prescription) is an appropriate remedy if the court finds a violation of the youths’ constitutional rights.

“Rex Tillerson is one of the most knowledgeable executives in the fossil fuel world on the role of his industry alongside our federal government in causing climate change and endangering my youth plaintiffs and all future generations,” said Julia Olson, attorney for the youth plaintiffs and executive director of Our Children’s Trust. “We intend to use his deposition to uncover his and others’ culpability, on behalf of these defendants.”

A federal judge indicated that the case will be set for trial in the summer or fall of 2017. Among the facts to be determined at trial are whether the federal government’s systemic actions over the past decades enabling climate change have violated the young plaintiffs’ constitutional rights.

This federal case is one of many related legal actions brought by youth in several states and countries, all supported by Our Children’s Trust, seeking the adoption of science-based prescriptions to stabilize the climate system.