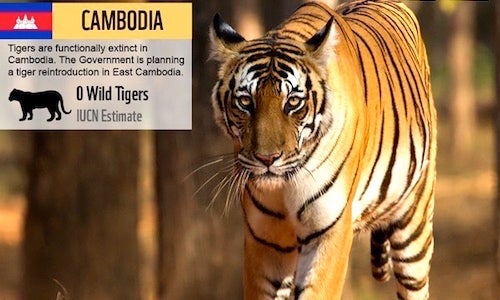 Due to years of illegal poaching and loss of habitat, tigers are now “functionally extinct” in Cambodia, conservationists conceded for the first time Wednesday.

According to World Wildlife Fund (WWF)-Cambodia, the last tiger seen in Cambodia’s wild was in 2007 from a hidden camera set up in the Eastern Plains Dry Forest Landscape in Mondulkiri Protected Forest.

“Today, there are no longer any breeding populations of tigers left in Cambodia, and they are therefore considered functionally extinct,” the conservation group said in a statement.

The AFP reported that Cambodia’s dry forests used to be home to scores of Indochinese tigers, but intensive poaching of both tigers and their prey has devastated the population.

But in a major effort to save the iconic species, on March 23 the Cambodian government approved its “Cambodia Tiger Action Plan” that would import tigers from abroad and introduce them to the Mondulkiri Protected Forest.

Keo Omaliss, a government official in charge of wildlife, told the Associated Press that Cambodia is considering negotiating with the governments of India, Malaysia and Thailand to bring at least seven to eight tigers to live in the forest to breed and repopulate.

Un Chakrey, communications manager for WWF-Cambodia, told the New York Times that the tigers could be introduced as soon as 2020.

The AFP reported that the new habitat will be protected against poachers by strong law enforcement and action to protect the tigers’ prey. The entire project is estimated to cost $20-50 million. 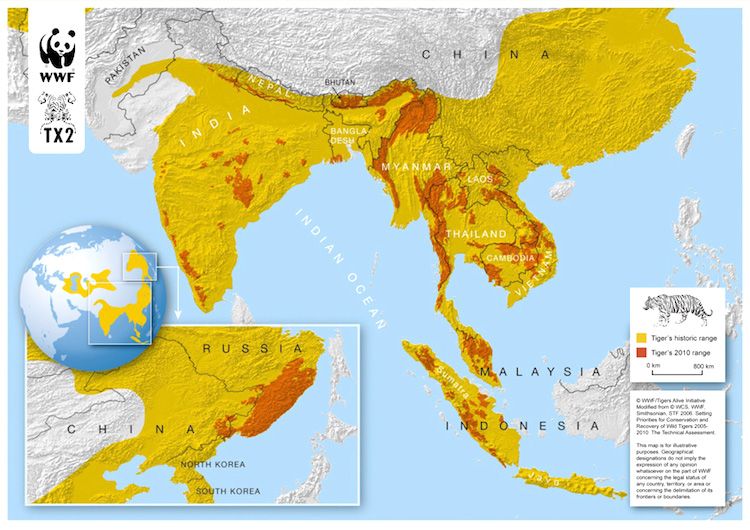 The Cambodia Tiger Action Plan also follows the objective of 13 tiger range countries to double the number of wild tigers in the world to more than 6,000 by 2022, which is the next Year of the Tiger. The global aim is also known as “Tx2.”

Representatives from these countries will meet at the 3rd Asia Ministerial Conference on Tiger Conservation in New Delhi next week to discuss the Tx2 plan.

“This conference comes at the critical halfway point in the Tx2 goal,” the WWF says. “There have been great successes so far, with tiger numbers increasing in Nepal, India, Russia and Bhutan, however Southeast Asia is facing a tiger crisis with poaching at unprecedented levels. It is feared that some countries could lose their tigers if immediate action isn’t taken. With only six years left, decisions made at this meeting will determine whether the Tx2 goal of 6000+ tigers by 2022 is met.”

The current global population of wild tigers is estimated to be less than 3,200, meaning they are nearly extinct worldwide.

Tigers are currently on the International Union for Conservation of Nature and Natural Resources (IUCN’s) Red List. According to the IUCN, the animals currently inhabit less than 6 percent of their historic range with a 42 percent decline since 2006.