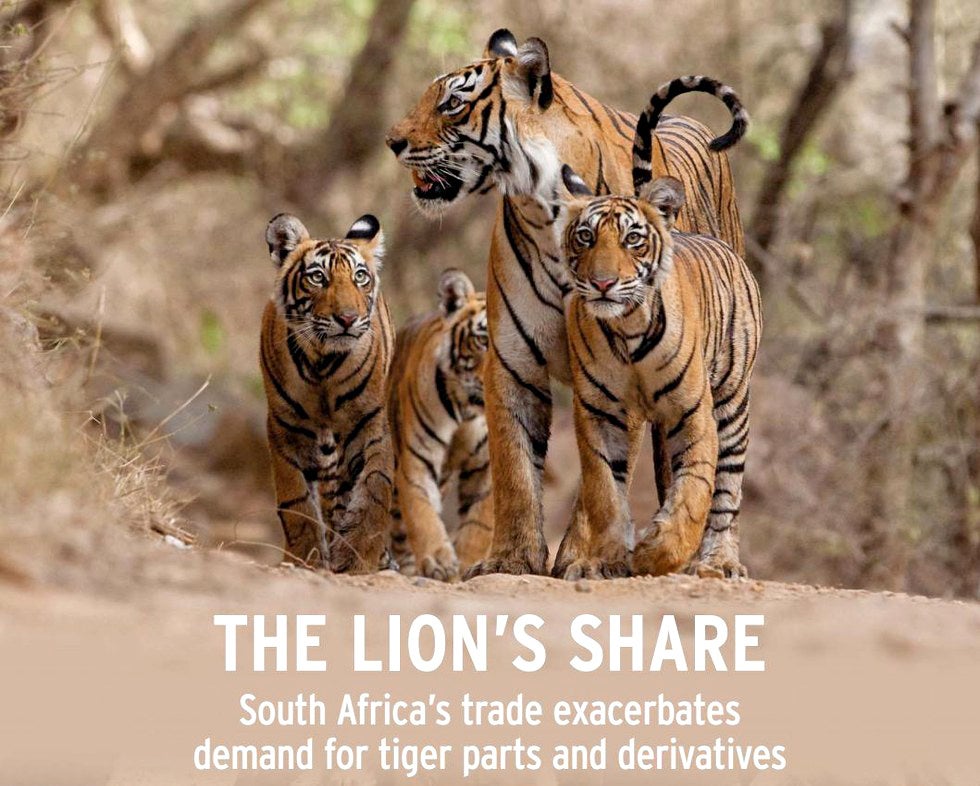 The world’s last remaining tigers are living under severe threat of extinction, having lost 93 percent of their historical range and suffered a population crash of 95 percent during the past century.

The major threat to their continued existence on Earth is poaching to meet the high demand in Asia for their parts and derivatives.

This demand is exacerbated by the legal trade in lion bone, so it was with dismay that the Environmental Investigation Agency witnessed the Convention on International Trade in Endangered Species (CITES) 17th Conference of the Parties last year decide to allow South Africa to export up to 800 lion skeletons a year—as long as the lions were sourced from captive breeding facilities in South Africa.

Ahead of next week’s 29th meeting of the CITES Animals Committee, in Geneva, Switzerland, the Environmental Investigation Agency has produced the detailed briefing The Lion’s Share: South Africa’s trade exacerbates demand for tiger parts and derivatives outlining the threat.

Any quota for a trade in captive-bred lions is of major concern. Not only is it likely this decision will negatively impact wild lion populations but it will also adversely impact on other large big cat species, especially the endangered tiger.

South Africa currently has up to 200 facilities breeding lions, with as many as 8,000 captive lions dwarfing the estimated 3,490 free-roaming lions found in the country.

Tigers are also being commercially bred in South Africa. In 2015, there were a known 44 facilities with at least 280 tigers being bred for trophy hunting and trade—in direct contravention of a CITES decision.

Legal exports of lion skeletons and parts from South Africa have increased markedly since 2008; exports of bodies and skeletons alone during this time period account for more than 4,200 lions. 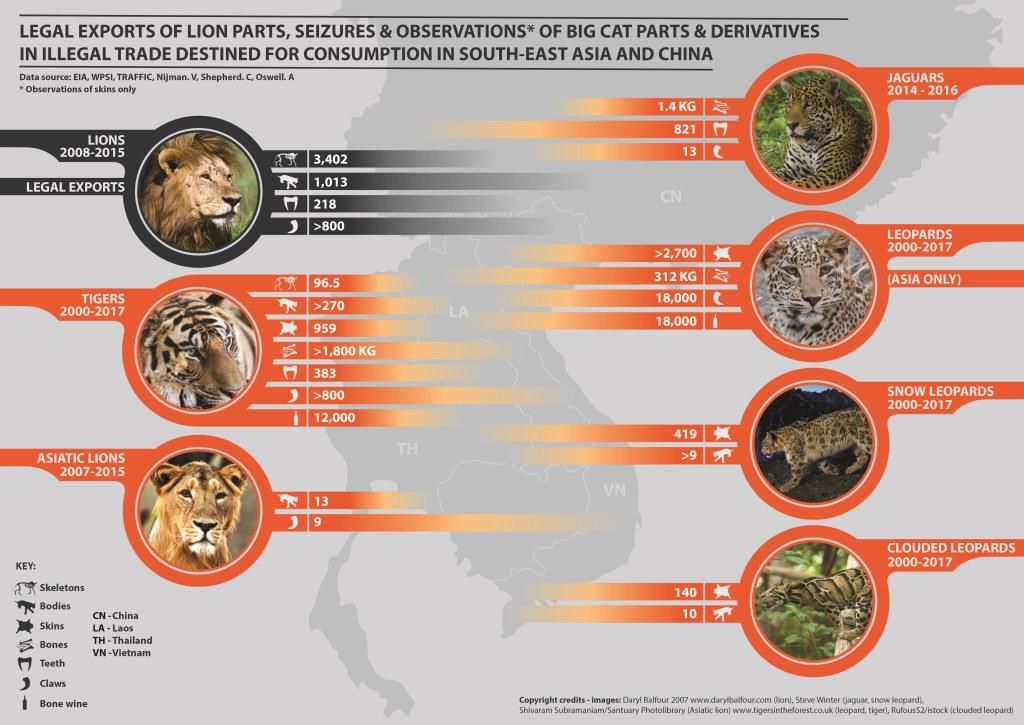 The main destination countries for skeletons, bodies, claws and teeth are within Asia—Vietnam and Laos alone imported 755 bodies, 5.87.5kg of bones (equivalent to 65 lions), 54 claws, 3,125 skeletons, 67 skulls and 90 teeth, all commercial purposes.

Exports of lion parts from South Africa undermines enforcement efforts to end illegal tiger trade since without DNA analysis it is very difficult to distinguish between tiger and lion bone, teeth and claws. Exports also stimulate demand for tiger parts and derivatives since large amounts of lion bone and derivatives are marketed as tiger and offered for sale in China and South-East Asia. For example, in May last year a Vietnamese national was arrested with 680 tiger claws in their possession although DNA testing showed they were in fact lion claws.

Discerning consumers preferring wild-sourced tiger parts desire proof that purported tiger bones and their derivatives are genuine, requesting the display of skins and/or carcasses as evidence. Such demand drives the poaching of wild tigers. Since 2000, globally more than 950 tiger skins have been either seized or observed in the illegal trade; more than 270 carcasses, 1,800kg of bones and 12,000 bottles of tiger bone wine have also been seized.

It is clear that a legal trade in captive lion parts is unworkable. The government of South Africa must adopt urgent action to end this trade which feeds a market not only consuming captive-bred lions but also wild tigers.

The Environmental Investigation Agency urges the South African Government to stop all commercial exports of lion parts and derivatives, to implement CITES decisions applicable to tigers (amending legislation if required to do so) and to undertake targeted intelligence-led enforcement operations in cooperation with main demand countries to dismantle criminal networks facilitating the lion and tiger trade.