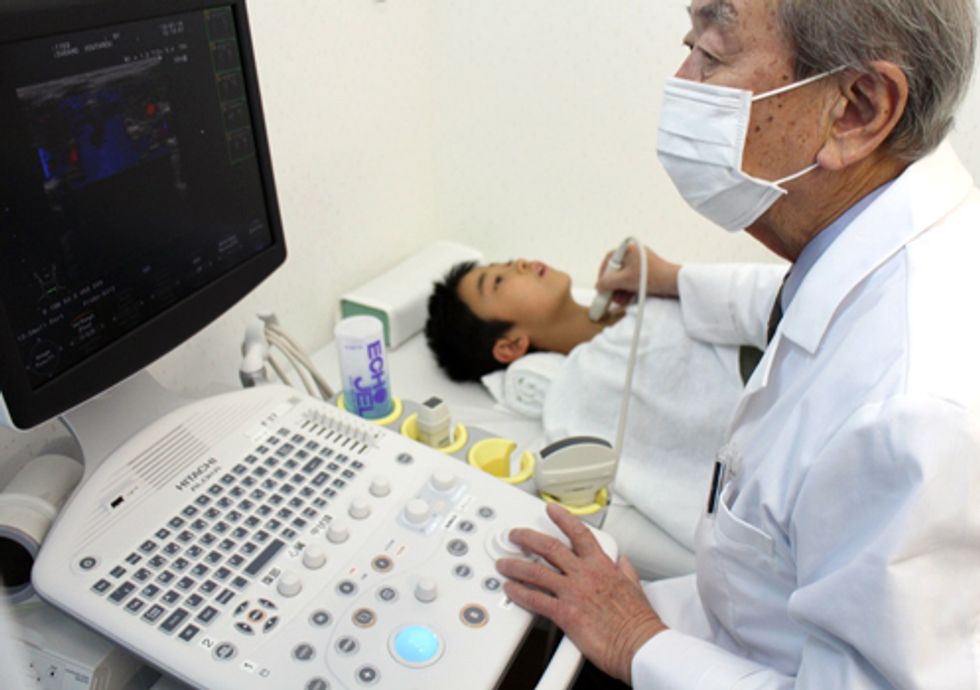 A doctor conducts a thyroid test during a rehearsal in October before the start of a Fukushima prefectural government program. Photo: Asahi Shimbun

Thyroid abnormalities have now been confirmed among tens of thousands of children downwind from Fukushima. They are the first clear sign of an unfolding radioactive tragedy that demands this industry be buried forever.

Two years after Fukushima exploded, three still-smoldering reactors remind us that the nuclear power industry repeatedly told the world this could never happen.

And 72 years after the nuclear weapons industry began creating them, untold quantities of deadly wastes still leak at Hanford and at commercial reactor sites around the world, with no solution in sight.

Radiation can be slow to cause cancer, taking decades to kill.

But children can suffer quickly. Their cells grow faster than adults'. Their smaller bodies are more vulnerable. With the embryo and fetus, there can never be a "safe" dose of radiation. No dose of radiation is too small to have a human impact.

A thyroid abnormality can severely impact a wide range of developmental realities, including physical and mental growth. Cancer is a likely outcome.

This is the tenth such study conducted by the prefecture. As would be expected downwind from a disaster like Fukushima, the spread of abnormalities has been increasing over time. So has the proportion of children with nodules that are equal to or larger than 5.1 mm. The number of cysts has also been increasing.

And the government has revealed that three cases of thyroid cancer have already been diagnosed in the area. All have been subjected to surgery.

Fukushima's airborne fallout came to our west coast within a week of the catastrophe. It's a virtual certainty American children are being affected. As health researcher Joe Mangano puts it: "Reports of rising numbers of West Coast infants with under-active thyroid glands after Fukushima suggest that Americans may have been harmed by Fukushima fallout. Studies, especially of the youngest, must proceed immediately."

Untold billions of gallons of unmonitored liquid poisons have poured into the Pacific. Contaminated trash has carried across the ocean (yet the U.S. has ceased monitoring wild-caught Pacific fish for radiation).

No one has yet measured the global warming impacts of the massive explosions and heat releases at Fukushima (or at Chernobyl, where the human death toll has been estimated in excess of a million).

The nuclear fuel cycle—from mining to milling to enrichment to transportation to waste management—creates substantial greenhouse gases. The reactors themselves convert ore to gargantuan quantities of heat that warm the planet directly, wrecking our weather patterns in ways that have never been fully assessed.

Even in the shadow of Fukushima, the industry peddles a "new generation" of magical reactors to somehow avoid all previous disasters. Though they don't yet exist, they will be "too cheap to meter," will "never explode" and will generate "radiation that is good for you."

But atomic energy is human history's most expensive technological failure, defined by what seems to be a terminal reverse learning curve. After more than a half-century to get it right, the industry has most recently poked holes in the head of a reactor in Florida, and installed $700 million steam generators it knew to be faulty in two more in California. It now wants to open San Onofre Unit Two at a 70 percent level, essentially to see what happens. Some eight million people live within a 50-mile radius.

This from an increasingly dangerous industry that has brought us four "impossible" explosions—one at Chernobyl, three at Fukushima—clearly with more yet to come. Its radiation has spewed for decades. Its wastes have no place on this planet.

The ultimate death toll among Fukushima's victims may be inescapable. But the industry that's harming them is not.

Those thyroid-damaged children bring us yet another tragic warning: There's just one atomic reactor from which our energy can safely come.

Two years after Fukushima, it is still 93 million miles away—but more ready than ever to safely, cleanly and cheaply power our planet.