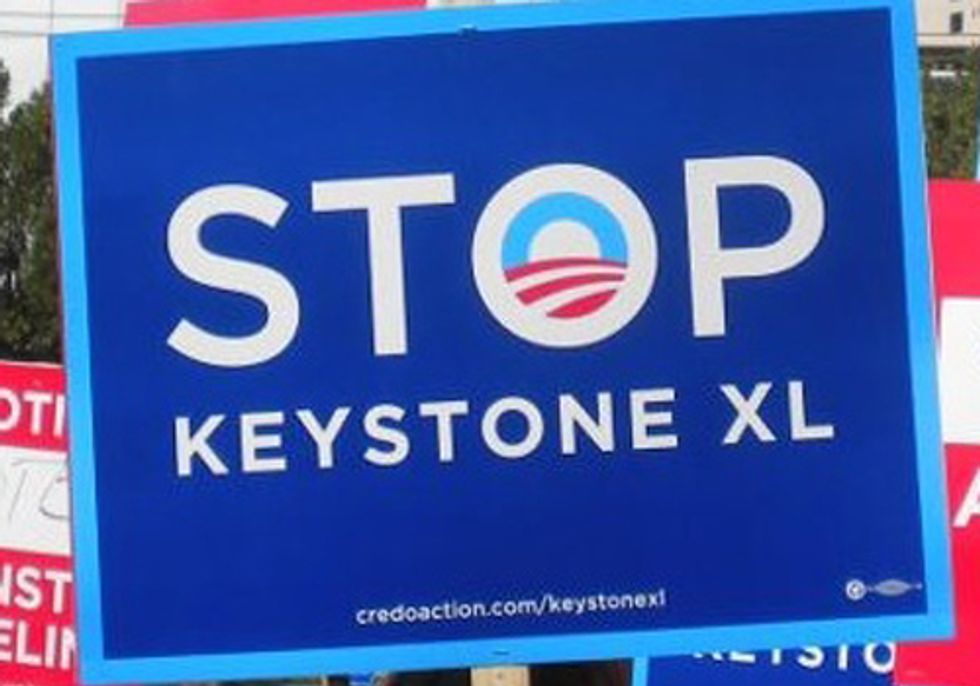 The U.S. Senate overwhelmingly approved the nomination of Sen. John Kerry as the new Secretary of State, by a vote of 94-3. The three "no" votes were cast by infamous climate denier James Inhofe (R-OK), and two anti-environment Texas Republicans, John Cornyn and Ted Cruz.

All three Republican Senators, Cornyn, Cruz and Inhofe signed the letter to President Obama last week calling for the approval of the Keystone XL pipeline, which would lead to the expansion of the Alberta tar sands, one of the dirtiest megaprojects on earth.

John Kerry is praised for his environmental record as a Senator, and he's widely anticipated to uphold his leadership role on climate change issues as Secretary of State.

During his confirmation hearings, Kerry promised to make climate change a top priority:

"I will be a passionate advocate about this, but not based on ideology, but based on facts, based on science."

A Closer Look At The Three Kerry "Nay" Sayers

Sen. Ted Cruz is a conservative tea partier who signed Americans for Prosperity's "No Climate Tax Pledge," and says he would like to abolish the Department of Energy.

His campaign website featured a "Stop the EPA" graphic that seems modeled after either a grade school lipstick attack on a bathroom mirror.

Demonstrating his zealous disregard for safeguarding the public from pollution, Cruz's 2011 campaign Growth and Jobs Agenda number two priority was to "Kill Cap and Trade," and number four was to revoke the sensible moratorium on offshore drilling in the wake of the BP oil disaster in the Gulf of Mexico. In priority five, Cruz opposed holding polluters accountable, wailing that "ominously, EPA has launched 'investigations' into hydraulic fracturing."

Cruz's campaign efforts relied on large cash injections and support from anti-environmental groups like Freedomworks and Americans for Prosperity, both with deep Koch roots.

For his part, Texas Sen. John Cornyn said this of the Environmental Protection Agecny (EPA) under Obama:

"The EPA has systematically targeted Texas through burdensome regulatory overreach, putting politics ahead of facts and due process. Now we know they intend to crucify energy producers in our state. It is time for the Obama Administration to get its boot off the neck of Texas job creators and either lead, follow, or just get out of the way.”

Like Cruz, Cornyn is against the EPA establishing federal standards for fracking—he'd prefer states and localities to (fail to) oversee the drilling bonanza in various shale basins. This is the ALEC-driven corporate playbook, as we've documented on DeSmogBlog.

And Inhofe … well, everyone already knows how his understanding of science is backwards. He's the senior ranking science denier whose affiliation should be changed from (R-OK) to (R-Denial).

I'll let Inhofe's own words about Kerry's confirmation speak for themselves:

“I have known Sen. Kerry for many years and consider him a friend, however, I am simply too philosophically opposed on the issues to support his nomination,” Inhofe said. “I do not believe that Kerry is a strong advocate of U.S. sovereignty, but favors expanding the powers of the United Nations at the expense of the U.S. For example, Kerry was the leader, as Chairman of the Foreign Relations Committee, to pass the Law of the Sea Treaty (LOST), and supports most all sovereignty eroding treaties involving the United Nations including the International Criminal Court, the Convention on the Rights of Person with Disabilities, and the Conference on the Arms Trade Treaty among others.”

“Kerry has also been a strong advocate for U.S. action on climate change,” Inhofe said. “While these discussions of a legislative solution have proved to be pointless since the Senate defeated global warming legislation in 2009, the topic remains a high priority for the international community. I expect Kerry will spend a significant amount of his time supporting the United Nations with a revived Kyoto Treaty to combat climate change, which would be devastating to every facet of our economy.”

It wouldn't, and in fact the far larger threat to our economy is ignoring action to address climate change. Every day we delay, the bill grows larger.