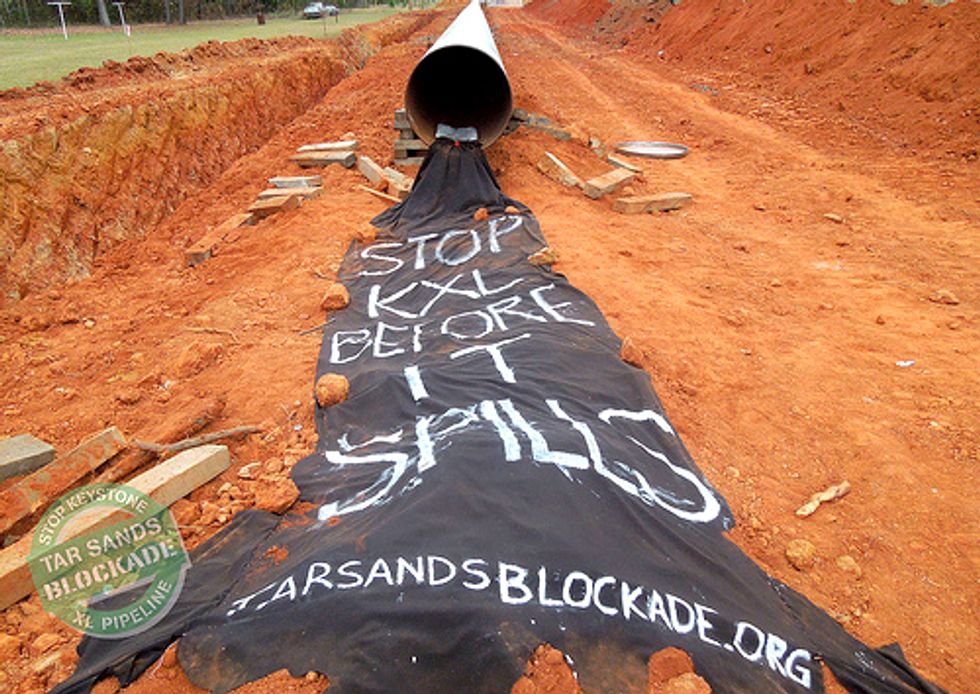 Today three people where arrested outside Tyler, Texas after they barricaded themselves in a mile long segment of Keystone XL pipe and successfully shut down construction at the worksite for most of the day.

The civil disobedience action drew a crowd of local supporters, including landowners who are angry about the way they’ve been bullied by TransCanada. Dozens of protesters stood along the road and sang songs and held banners to support the blockaders inside the pipe and raise awareness about the dangers of the Keystone XL project. Police later forced the crowd of supporters off the property adjacent to TransCanada’s easement, despite the fact that the landowner had explicitly given the protesters permission to be on their private property.

The police threatened a variety of dangerous and violent responses including tear gas, canine units, cutting into the pipe or lifting it up to dump out the blockaders. Eventually, they were able to forcibly remove the blockaders and the barrels they were locked into. Both blockaders, Glen Collins and Matt Almonte, were extracted and arrested. Isabel Indigo Brooks, who had been inside the pipe to provide support for Matt and Glen, was also arrested.

All three have been charged with three misdemeanors: criminal trespassing, resisting arrest and illegal dumping of more than 500-1000 pounds. We haven’t yet learned whether the police used mace or other means of pain compliance or if any of the blockaders were injured by the police.

Several protestors with Tar Sands Blockade sealed themselves inside a section of pipe destined for the Keystone XL tar sands pipeline to stop construction of the dangerous project. Using a blockading technique never implemented before, Matt Almonte and Glen Collins locked themselves between two barrels of concrete weighing more than six hundred pounds each. Located twenty-five feet into a pipe segment waiting to be laid in the ground, the outer barrel is barricading the pipe’s opening and neither barrel can be moved without risking serious injury to the blockaders.

Glen Collins and Matt Almonte sealed themselves this morning inside a section of pipe destined for the Keystone XL tar sands pipeline. Photo courtesy of Tar Sands Blockade

The barricaded section of the pipeline passes through a residential neighborhood in Winona, TX. If TransCanada moves ahead with the trenching and burying of this particular section of pipe, it would run less than a hundred feet from neighboring homes. Tar sands pipelines threaten East Texas communities with their highly toxic contents, which pose a greater risk to human health than conventional crude oil. TransCanada’s existing tar sands pipeline, Keystone XL’s predecessor, has an atrocious safety record, leaking twelve times in its first year of operation.

“TransCanada didn’t bother to ask the people of this neighborhood if they wanted to have millions of gallons of poisonous tar sands pumped through their backyards,” said Almonte, one of the protesters now inside the pipeline. “This multinational corporation has bullied landowners and expropriated homes to fatten its bottom line.”

Recently, more than 40 communities worldwide planned actions with Tar Sands Blockade during a week of resistance against extreme energy extraction and its direct connection to the climate crisis. A growing global movement is rising up against the abuses of the fossil fuel industry and its increasingly desperate pursuit of dangerous extraction methods.

“I’m barricading this pipe with Tar Sands Blockade today to say loud and clear to the extraction industry that our communities and the resources we depend on for survival are not collateral damage,” said Collins, another blockader inside the pipe and an organizer with Radical Action for Mountain Peoples Survival (RAMPS) and Mountain Justice, grassroots campaigns in Appalachia working to stop mountaintop removal coal mining.

“This fight in East Texas against tar sands exploitation is one and the same as our fight in the hollers of West Virginia. Dirty energy extraction doesn’t just threaten my home; it threatens the collective future of the planet,” said Ron Seifert, a spokesperson for Tar Sands Blockade.

“At this late stage, doing nothing is a greater danger than the risks of taking direct action to stop destructive projects like Keystone XL. That’s why folks working with groups like RAMPS, the Unist’ot’en Camp fighting a natural gas pipeline in British Columbia and Tar Sands Blockade are willing to use everything including their own hands and feet to ensure we all have a safe climate and healthy, thriving communities.”

Today also marks day five of the Houston Hunger Strike in which Gulf Coast activists with Tar Sands Blockade are going without food to demand that Valero divest entirely from the Keystone XL pipeline and invest in the health and wellbeing of the communities it’s poisoning.