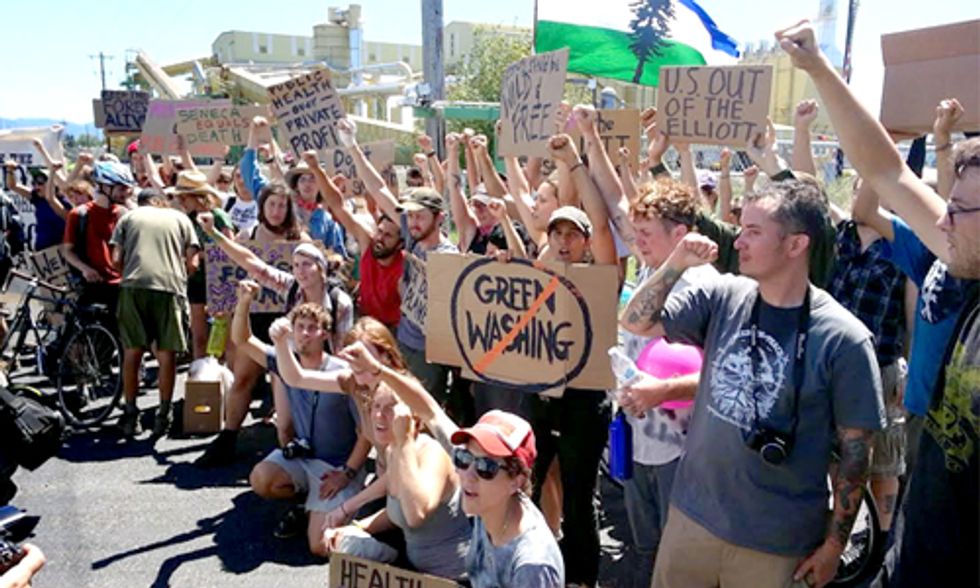 Several people locked themselves to equipment at the plant, halting a conveyor belt and blocking a "truck dump" where biomass is loaded into the incinerator, while dozens of protesters rallied outside the gates. A banner was dropped off of a tower reading: “Seneca Jones: Privatizing the coast range, polluting West Eugene.” After police extracted the blockaders, three were taken to Lane County Jail and are facing several charges, including misdemeanor criminal mischief and felony burglary.

The activists brought attention to Seneca Jones Timber's role in privatizing the Elliott State Forest. This month Seneca closed on their purchase of 788 acres in the Elliott, called East Hakki Ridge. Co-owner of Seneca Kathy Jones recently expressed the company's intention to clearcut East Hakki and replace it with Douglas fir plantation.

Several people locked themselves to equipment at the plant, halting a conveyor belt and blocking a "truck dump" where biomass is loaded into the incinerator. Photo credit: Cascadia Forest Defenders

Cascadia Forest Defender Richard Haley commented, “However Kathy Jones paints it, her company is a bad neighbor everywhere it operates. Here in Eugene, Seneca pollutes. In the Elliott, Seneca clearcuts and puts up 'no trespassing' signs in pristine, never before logged forest. East Hakki is no longer a place where locals can go hunt, fish, hike, camp or watch birds. Now it is corporate property.”

Coos Bay citizen science group Coast Range Forest Watch documented Marbled Murrelet nesting behavior in East Hakki Ridge in May. The bird is federally protected under the Endangered Species Act, which prohibits actions that injure or kill threatened species, including destruction of habitat. A month after Marbled Murrelets were found in East Hakki, conservation law organizations filed to sue Seneca Jones in the event of logging in the timber sale. Murrelets were also found in two timber sales purchased by timber company Roseburg Forest Products. Another parcel is up for sale this fall, and the State Land Board is considering privatizing the entire forest.

An Earth First! protester locked down to the fueling station to the Seneca Jones "sustainable" biomass facility in Eugene, OR. The lockdown effectively prevented the plant from refueling. Photo credit: Cascadia Forest Defenders

Despite Seneca's claim of being sustainable, the biomass plant failed its first Environmental Protection Agency air pollution test in 2011 but still requested more state funds to offset its production costs. In spite of its high impact on local air quality, Seneca receives $10 million in tax credits from the state of Oregon under the Business Energy Tax Credit Program.

“The plant has had a bad reputation in this community since its opening,” said West Eugene resident Matthew Hawks. “It's marketing itself as a 'green' solution in my neighborhood, but is actually harming the environment around us, especially the air we breathe.”

The plant, which only employs 11 people, releases an estimated 17,900 pounds of air toxins into West Eugene Neighborhoods annually, in addition to the 73,000 pounds released each year from the mill itself. There are three schools within three miles of the Seneca biomass facility.

“While clearcutting and privatization in the Elliott State Forest is done in the name of public schools, this irresponsible company is taking millions of public dollars and impacting the health and safety of school children in their own neighborhood. It feels really twisted,” said Cascadia Forest Defender Cordelia Finley.

The Eugene-based Cascadia Forest Defenders carried out this action with activists from across the U.S. following an annual Earth First! camp-out in the woods of Southern Oregon, called the Earth First! Round River Rendezvous.