We Ignore Thousands of Threatened Plant Species at Our Own Peril 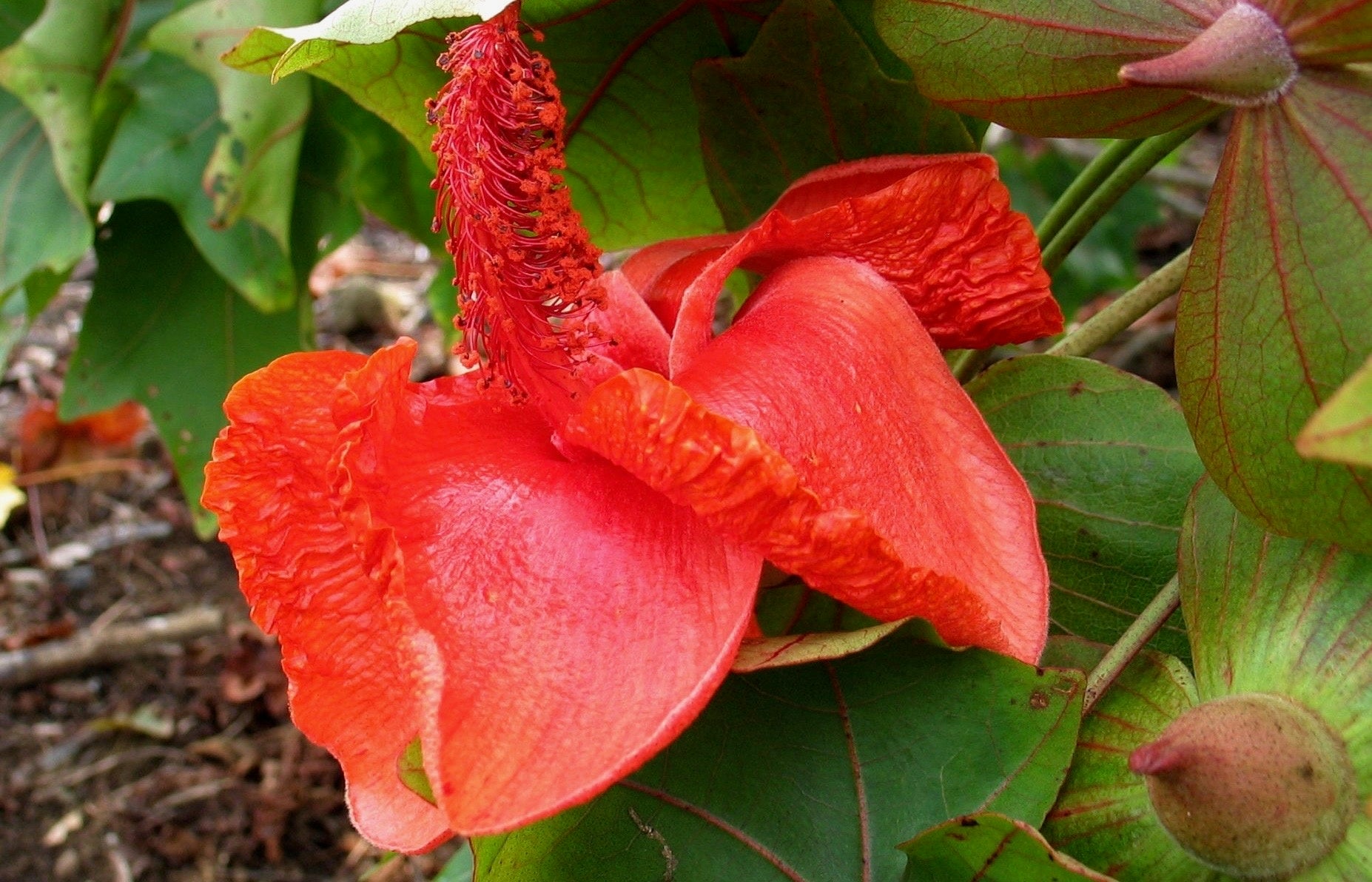 Kokia drynarioides, commonly known as Hawaiian tree cotton, is a critically endangered species of flowering plant that is endemic to the Big Island of Hawaii. David Eickhoff / Wikipedia

Kokia drynarioides is a small but significant flowering tree endemic to Hawaii’s dry forests. Native Hawaiians used its large, scarlet flowers to make lei. Its sap was used as dye for ropes and nets. Its bark was used medicinally to treat thrush.

But Kokia drynarioides — commonly known as Hawaii tree cotton, or kokio and hau hele’ula in Hawaiian — is also one of the loneliest plants on Earth. After more than a century of overgrazing from non-native animals, competition from weeds, wildfires and widespread habitat loss, these days, you can count with two hands the number of wild kokios that still remain.

“In the early 1900s, Joseph Rock, a famous botanist who worked in Hawaii, said kokios were in no threat of extinction because of cattle and other ungulates,” Josh VanDeMark, a Hawaiian plant expert, told Truthout. “By the 1980s, the population dropped down to only a couple dozen individuals. Today, there are only seven mature individuals known that are wild.”

Certainly, in a state dubbed the “extinction capital of the world,” the Plant Extinction Prevention Program’s (PEPP) mission feels Sisyphean. Due to its long history of extreme isolation and climatic conditions, Hawaii is home to some of the richest varieties of flora and fauna on Earth. But the arrival of humans and rapid development exposed indigenous species to predators, diseases and invasive species of which they were not evolved to withstand. Hawaii now claims 44 percent of the total endangered and threatened plant species in the U.S.

What’s more, PEPP’s .1 million-a-year budget has been supported by state and federal funds and grants, as well as public and private donations. But this year, due to the “current challenging fiscal climate,” the program is operating on a shoestring budget reflecting “70 percent funding reduction,” the group states on its website.

“Those kinds of things can set us back. We’re still going even though we lost a lot of our funding over the past couple of years. We’re still going, but at a reduced capacity,” VanDeMark said. “But for some of these species, they just don’t have the time. They need 10 times the resources that are available and they need it right now.”

It goes without saying that we need plants. Plant ecologist Doria Gordon, a lead senior scientist at the Environmental Defense Fund and a conservationist for the last 30 years, helped list many of the reasons why: They provide food, clothing, shelter, medicine and oxygen. They host and nourish a vast number of species, such as insects, birds, mammals, fungi and lichens. Their roots are central to soil health, control erosion and improve water quality. Through photosynthesis, plants absorb the carbon dioxide we release into the atmosphere, making them a natural and crucial carbon sink. Their beauty supports our economy and nurtures our well-being. They inspire, they give life, and so much more.

“So it means that they are really vital for everything we do, for everything in our lives,” Gordon said. “And even though animals are more charismatic and get more attention from the public, if we don’t pay attention to the plants, we won’t survive.”

Not only that, four out of five Americans support the goals of the U.S. Endangered Species Act, which is aimed at preventing the extinction of imperiled plants and animals. This amount of support has not wavered for the last two decades.

Yet, a lot of Earth’s flora is at risk of vanishing completely. More than 20 percent of the world’s known plant species, or one in five, are threatened with extinction, a 2016 study by experts at the Royal Botanic Gardens at Kew in London found.

Gordon, who was not involved in the study, said that unless we take dramatic action, that figure is “unlikely to improve” due to the continued stresses that all of the world’s species, including humans, are facing.

Some of the biggest threats identified in the Kew study include agricultural destruction (such as livestock farming and palm oil production); biological resource use (logging, gathering terrestrial plants); residential and commercial development; and invasive and problematic species. Climate change is also a growing threat.

“We’re only slowly learning both the potential scope and the degree of threat [of climate change], but there are changes we can see now,” Gordon said. For instance, she said, extreme events in temperature and precipitation are pushing the environmental tolerance of plants.

“We were seeing daffodils starting to come up in the D.C. area, and then, of course, we had massive snow and sleet [in February],” Gordon explained. Sudden weather changes not only harm the sensitive tissue of the daffodils, but over the long term, this disruption could also throw pollinators out of sync with the flowers they pollinate, which can then impact plant populations.

So, what can be done? Importantly, we must urge our representatives and lawmakers to protect threatened and endangered plants from extinction by defending and strengthening the Endangered Species Act.

Take Kokia drynarioides, the lonely Hawaiian tree. Although it has lost most of its former habitat, because it is federally listed as endangered, “a fair amount of work” has been done to plant the tree in protected areas, according to VanDeMark.

You can also advocate, donate and volunteer with conservation programs to help endangered plant species survive. We also need to support private and public landowners who are protecting swaths of native plant habitat and ensure those lands are properly maintained, Gordon advised.

“At the same time, obviously, climate change is a big looming specter,” she added. “We all have individual roles to play, and [we should] encourage our elected officials to follow policies that reduce emissions.”

Plants are all around us, so we often take them for granted or tend to forget about their importance. But for the thousands of species at risk of extinction, we must act now before they’re gone forever.

“We’re always asking ourselves: ‘Why are we even trying?'” VanDeMark joked.

But for the PEPP team, the cause is simply much greater than themselves. “To me, a lot of these plants are very important culturally, and they’re a part of the story of this place. These plants were here for millions of years before any humans arrived in Hawaii,” VanDeMark said. “Just like any other place in the world has a unique story of their own plants and animals. Personally, I feel those stories are more important to humans than we fully appreciate.”

Note: In July, then-statewide PEPP Manager Joan Yoshioka told Truthout that PEPP will be further integrated into the state system by district as a cost-saving measure. Yoshioka, who stepped down from her role as manager on August 1 as a result of this transition, said in an email that “the state will take on more of the management responsibilities of the program with a medium-term commitment to make PEPP a fully funded state program.”

Lorraine Chow is a freelance environmental journalist based in South Carolina.