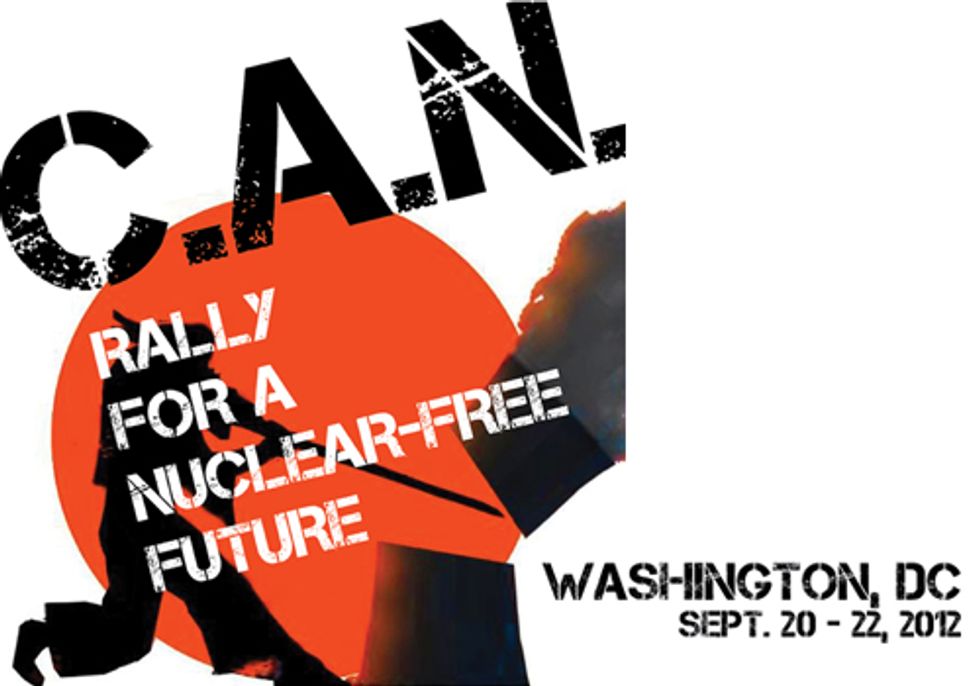 Thousands of anti-nuclear activists from across the U.S. will converge on Washington, D.C. this Sept. 20 - 22 for a Rally for a Nuclear-Free Future.

The three-day event, brought together by the grassroots network Coalition Against Nukes (CAN), will feature a Congressional briefing on nuclear dangers attended by Rep. Dennis Kucinich (OH), a peaceful demonstration at the Nuclear Regulatory Commission (NRC), a presentation of petitions at the embassies of Japan and India, and a demonstration at the Capitol to increase awareness of the dangers of nuclear power plants and spread of global radiation.

"In the wake of the ongoing disaster at the Fukushima nuclear plants, we are witnessing a mass uprising against nuclear power in Japan," said Gene Stone of Residents Organized for a Safe Environment, a watchdog group working to keep the San Onofre Nuclear Generating Station shut down permanently in Southern California. "Let's hope that it doesn't take a major nuclear catastrophe in the United States for the American people to awaken to the dangers posed by the production of nuclear energy."

A vocal and visible grassroots anti-nuclear movement has re-emerged across the U.S. since the ongoing catastrophe at Fukushima Daiichi began on March 11, 2011. Citizen watchdog groups from across the country have expressed outrage over the U.S. government's reckless pro-nuclear agenda and the dangers posed by the deteriorating condition of the 104 aging nuclear reactors in the U.S.—23 of them GE Mark I reactors, which are the same design as the Fukushima Daiichi nuclear power plants in Japan.

Organizers have scheduled a range of peaceful actions:

"It is time to raise our voices more urgently about the dangers of nuclear energy production and place it at the forefront of the national agenda," said Priscilla Star, who founded the Coalition Against Nukes after the catastrophic accident at Fukushima. "In an effort to mobilize an election year policy shift, we hope to break through the apathy and silence on nuclear issues condoned by our elected officials and the two major party presidential candidates," Star said.

According to CAN organizer Michael Leonardi, "The Nuclear Regulatory Commission allows nuclear reactors to operate by weakening safety standards and ignoring safety issues. This puts millions of Americans, trillions of dollars of real estate, and water and food supplies at risk of a major nuclear accident. Nuclear watchdog groups from Vermont to Virginia, from Florida to the Great Lakes, and from Portland to Southern California are outraged at the government’s reckless pro nuclear agenda and the omnipresent danger posed by this country's 104 aging nuclear reactors."

"On Friday, we will take our movement directly to the headquarters of the Nuclear Regulatory Commission," said Peter Rugh of the Occupy Wall Street movement in New York City.