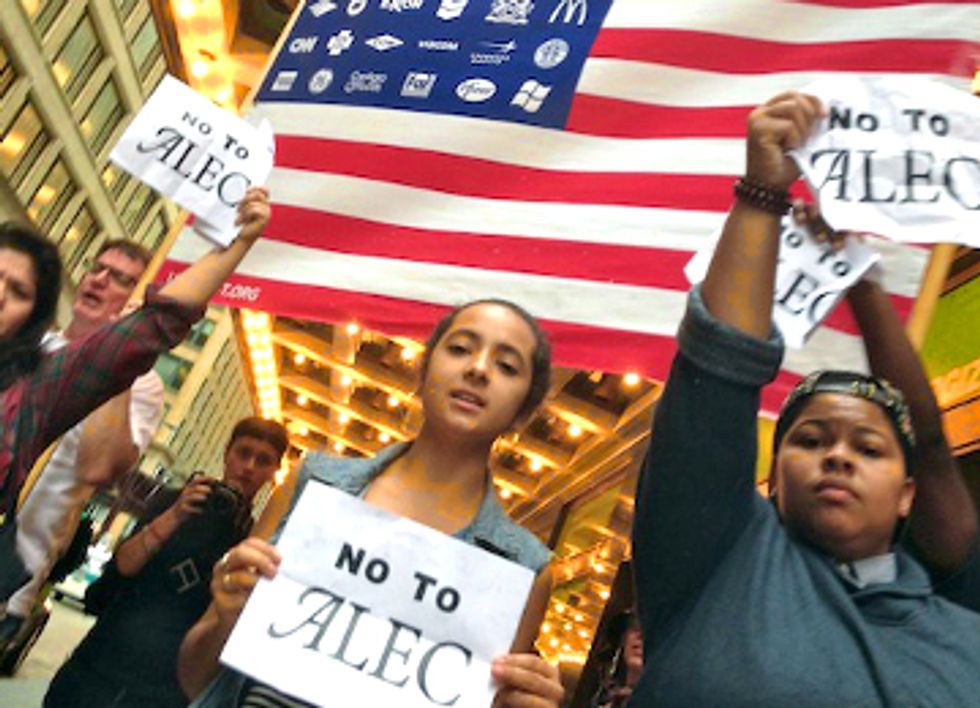 Thousands of union and non-union workers and their allies shut down the streets around the posh Palmer House Hilton here yesterday, protesting the right-wing American Legislative Exchange Council (ALEC) meeting at the hotel. The demonstrators, organized by the 500,000-member Chicago Federation of Labor (CFL) and a host of community allies, say ALEC is hurting just about everyone in America who is not part of the top one percent.

ALEC is behind hundreds of bills its lawmaker members push through state legislative bodies—bills that destroy collective bargaining rights, lower wages, limit voting rights, weaken environmental protection—and it is behind the notorious "stand your ground" laws backed by the National Rifle Association.

Outside the hotel, on Monroe Street, the Musicians Union Band played "When the Saints Go Marchin' In" as wave after wave of members from every union in Chicagoland filled the sidewalk and the street.

Elevated Chicago Transit Authority trains passing along the Wabash Ave. blew their horns in support as hundreds who couldn't fit on Monroe Street spilled out to the adjoining street under the train trestle. The crowds roared every time they heard the train operators blow the horns.

"This is a beautiful gathering not just of union workers and non-union workers but of all our allies as well—a true coalition," declared Bob Reiter, secretary-treasurer of the CFL, in his speech to the cheering crowds.

"ALEC thinks they can, in secret, take over the democratic process and write our laws for us," Reiter continued. "They are wrong and we are here to show them that."

"Save the workers, save the teachers, save the students, save the youngsters, save the carpenters, save the janitors and the machinists—save all your people," the Rev. Jesse Jackson Sr. implored from the podium. The crowd shouted approval after each group he mentioned.

Among the demonstrators against ALEC was Melissa Rakestraw, a letter carrier from Schaumburg, IL.

"You know that $5.5 billion mandate with Congress forcing the postal service to pay that out for future pensions?" Rakestraw said, explaining why she came to protest. "That's what's killing the post office and it was John McHugh, a Republican congressman—a member of ALEC—who pushed that through years ago. ALEC has its deadly fingers everywhere."

Kimberly Bowsky, a teacher at Seward Elementary School in Chicago's Back of the Yards neighborhood, was also intent on voicing her opposition to ALEC, "I see the scars in my neighborhood. I haven't lost my job yet, but I know these people are out not just to cut services but to kill public education altogether."