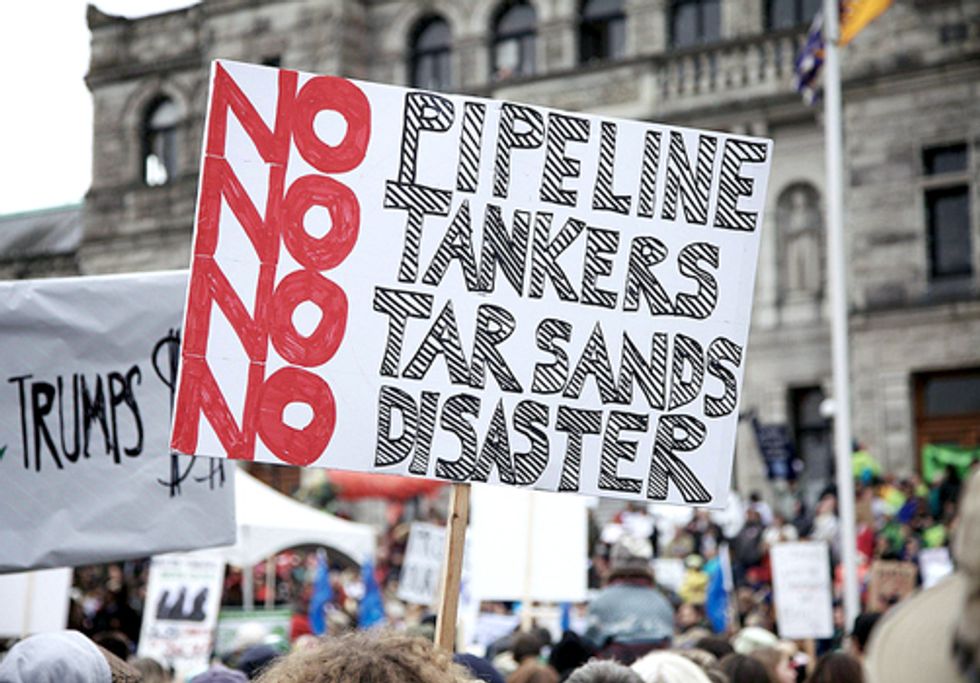 And so they came in their thousands to gather on the front lawn of the legislature of British Columbia yesterday to protest against the controversial Northern Gateway pipeline.

More than 3,000 people braved the rain and cold to protest against the Northern Gateway, which is planned to take the dirty tar sands from Alberta through the forests of British Columbia to the west coast of Canada.

At the end of the protest they unfurled a black banner which was 235 metres long, the same length as an oil tanker.

The sit-in was organized by a coalition of groups wanting to send a clear “NO” message to both the provincial and federal governments to block Endbridge’s Northern Gateway pipeline as well as the Kinder Morgan pipeline.

Speaker after speaker stood up to attack the pipelines in front of demonstrators carrying signs with slogans such as: “Our coast is not for sale,"“People speak louder than money” and “Not gonna happen.”

“Our government is not standing behind us the people that, we here, are saying ‘no more’,” Chief Ruben George of the Tsleil-Waututh First Nation told the crowd. “Let’s hold our government accountable.”

“Thank you regular people of British Columbia for standing with us because it is through your efforts that we are winning this fight,” said Chief Jackie Thomas with the Saik’uz First Nation.

“If necessary we will fight this at the barricades on the land itself,” added Grand Chief Stewart Phillip.

Peter McHugh, spokesman for the group Defend Our Coast said, “We mean to deliver a message to [Premier] Christy Clark and the federal government that British Columbians oppose these tar sands, tankers and pipelines.”

Art Sterrit, executive director with the Coastal First Nations added, “This project is not something that British Columbians want and we’re also looking to demonstrate what lengths British Columbians are willing to go to stop the project.”

The protests have been backed by local union groups such as the Communications Energy and Paperworkers as well as Greenpeace Cananda, ForestEthics,  Council of Canadians and several First Nations, and have been endorsed by high-profile Celebrities backing the protest include Michael Moore, singers Sarah Harmer and Dan Mangan, and actors Ellen Page, Mark Ruffalo and Daryl Hannah.

Writing in yesterday’s Globe and Mail, along with Art Sterritt, Suzuki argued that:

“Humanity has become so powerful in numbers, technology, consumption and a globalized economy that we are altering the physical, chemical and biological properties of the planet on a geological scale. In the process, we are undermining Earth’s life-support systems—the air, water, soil, photosynthesis and biodiversity that keep the planet habitable.”

“It is within this context that Canadians are taking a close look at plans to fill tankers on the B.C. coast with raw bitumen piped from Alberta across forests and mountain ranges that support some of the world’s best salmon rivers. They don’t like what they see, and government had better start paying attention.”

And if the government does not start paying attention, there are thousands who will make sure that they will.