Thousands Protest Around the World to Ban Fracking 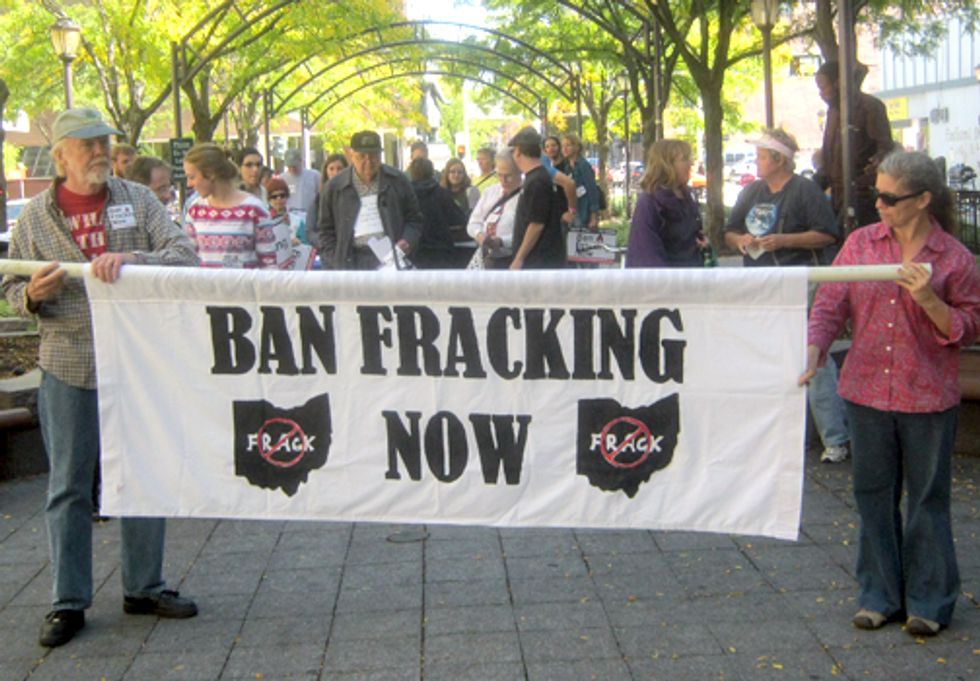 Today people from all over the world hosted events to ban fracking. From New York to South Africa, people gathered to protect human health and the environment from the risks associated with fracking. Global Frackdown is the first coordinated international day of action against fracking that united activists on five continents at more than 150 events calling for a ban on fracking in their communities and to advocate for the development of clean, sustainable energy solutions.

“Fracking and drilling for oil and gas poses a direct and immediate threat to our drinking water, our health and our communities,” said Wenonah Hauter, executive Director of Food & Water Watch. “While big oil and gas continues its spin campaign to obscure the dangers of this toxic, polluting process, people around the world are taking a stand through the Global Frackdown.”

Major actions overseas included a rally on the steps of the European Parliament; demonstrations in front of Parliament buildings in South Africa, Bulgaria and the Czech republic; marches in Argentina; grassroots activities in Paris and the south of France, and screenings of the film Gasland in Spain.

“The events taking place around the world as part of the Global Frackdown prove that people are tired of the lies from big oil and gas,” said Jim Dean, chair of Democracy for America. “Time and again, studies prove fracking is unsafe—for our communities, our families and our country. We’ve learned our lessons from Love Canal and the Horizon oil spill—when money is involved, corporations lie to the people to keep their profits up. It’s time to end the lies.”

“This past summer, we’ve gotten one stark reminder after another of the human and economic costs of a climate system starting to spiral out of control,” said Erich Pica, president of Friends of the Earth. “Substituting one bad fossil for another doesn’t solve the climate crisis. But the good news is that communities all over the world aren’t buying what the oil and gas industry is selling—more extreme energy fueling more extreme weather. They’re organizing inspiring actions all over the world to turn up the heat on the fossil fuel industry and its bought-and-paid-for political cronies.”

“Big oil’s plan to frack the world will keep us addicted to fossil fuels at a critical moment when we need to immediately transition to clean, safe, renewable energy,” concluded Duncan Meisel, anti-fracking campaigner at 350.org. “This is the world’s richest industry, and they’re doing all they can to buy off politicians in order to frack our communities, but this event shows that the entire world is ready to stand up to stop them.”

At the Cincinnati Frackdown in Ohio, 50 people met in Piatt Park to hear speakers and take action on the local, state and federal levels. Among the speakers were Cincinnati Vice Mayor Roxanne Qualls, Cincinnati Council Members Laure Quinlivan and Wendell Young, Father Neil Pezzulo of Glenmary Home Missioners, Kate Melges of Greenpeace and Alison Auciello of Food & Water Watch. Speakers conveyed the need to be good stewards of the Earth, frustration with state laws that make it difficult for local communities to protect human health and safety, and the need for a statewide ban on fracking. After the rally, protestors marched to Cincinnati City Hall to recognize the strong stand Cincinnati has taken against fracking.

Photos are still coming in from this tremendous day of action across the globe to ban fracking.