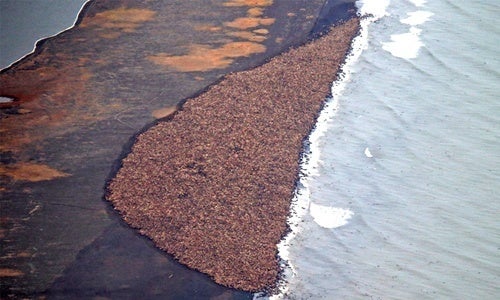 In what has now become a regular occurrence, thousands of walruses are being forced ashore on a remote barrier island in Alaska, threatening their survival. Walruses use sea ice to rest and feed. But with Arctic sea ice hitting a new low this past winter and fears that the Arctic could be entirely ice-free in summer months by the 2030s, walruses have no choice but to crowd ashore in mass numbers.

The first reported sighting this year was earlier this week. Gary Braasch, an environmental photographer, told The Guardian he first spotted the walruses coming ashore on the southern end of the barrier island, about two miles from the hamlet of Point Lay. The mass stranding comes ahead of President Obama’s visit to Alaska to shed a spotlight on the toll climate change is taking on the Arctic region.

Last year, upwards of 35,000 walruses were forced ashore, setting a record. U.S. government agencies and the Native village of Point Lay ask that the media refrain from visiting the community to film or “sightsee” as “the walruses need space to reduce disturbance and possible trampling of animals.” Since at least 2007, due to the loss of sea ice in the Chukchi Sea, “walrus females and calves are coming ashore in the late summer/early fall in large numbers near the community,” said U.S Fish and Wildlife Service (USFWS), National Oceanic and Atmospheric Administration and U.S. Geological Survey in a joint statement. 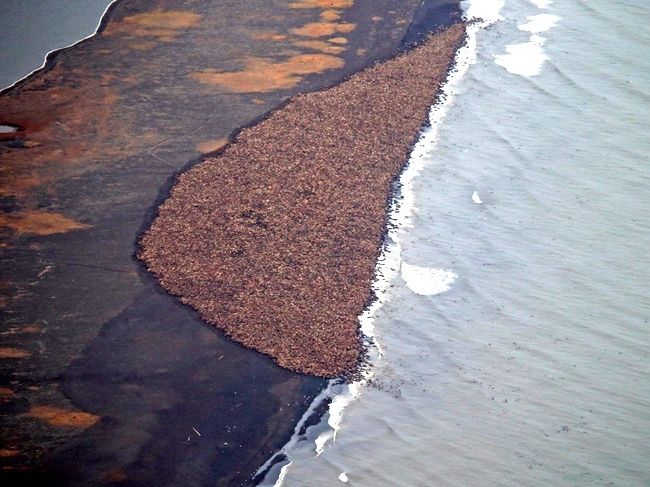 The site has been occupied by as many as 20,000 to 40,000 animals at its peak, according to Jim MacCracken, supervisory wildlife biologist with the USFWS. Scientists worry that any disturbances could lead to large stampedes, which injure and kill some walruses, especially calves.

“Last year, it was estimated that 60 young walruses were killed because of the sheer number of animals gathered together,” said the agencies. The noise from overhead aircraft is of particular concern, and the agencies are considering placing temporary flight restrictions within the vicinity of the “haulout”—the term given to when walruses rest and feed in coastal areas during their migration. 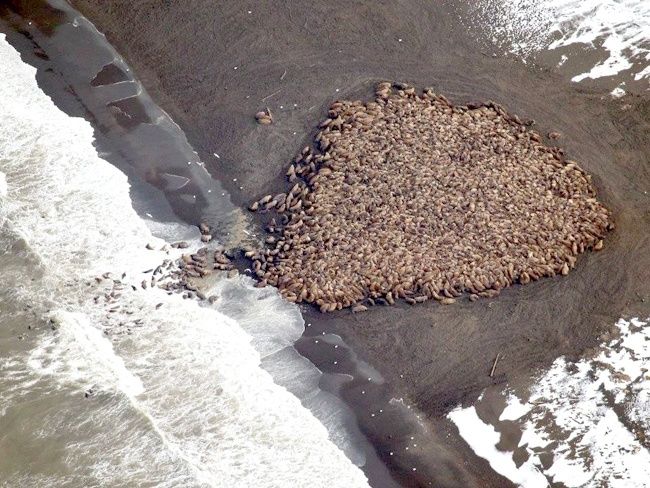 Last year, an estimated 35,000-40,000 walruses were stranded near the Village of Point Lay on a remote barrier island in Alaska. Photo credit: NOAA Fisheries

It’s common for Pacific walruses to use coastal haulouts for resting during the fall southward migration, the agencies explained. Adult males, in particular, routinely use coastal haulouts along the Bering Sea in both Russia and the U.S. during the summer months, as evidenced by this live cam of 14,000 walruses relaxing on an Alaskan island. But females and their calves prefer to rest and feed more on ice floes until they begin to migrate back to the Bering Sea for the winter.

“Ice floes provide protection from predators, allow walrus to haul out in smaller groups and provide easy access to feeding areas below,” said the agencies. With Alaska and the rest of the Arctic rapidly warming, that leaves walruses no choice but to come ashore.