Thousands of Tiny Red Crabs Wash Up on California Coastlines 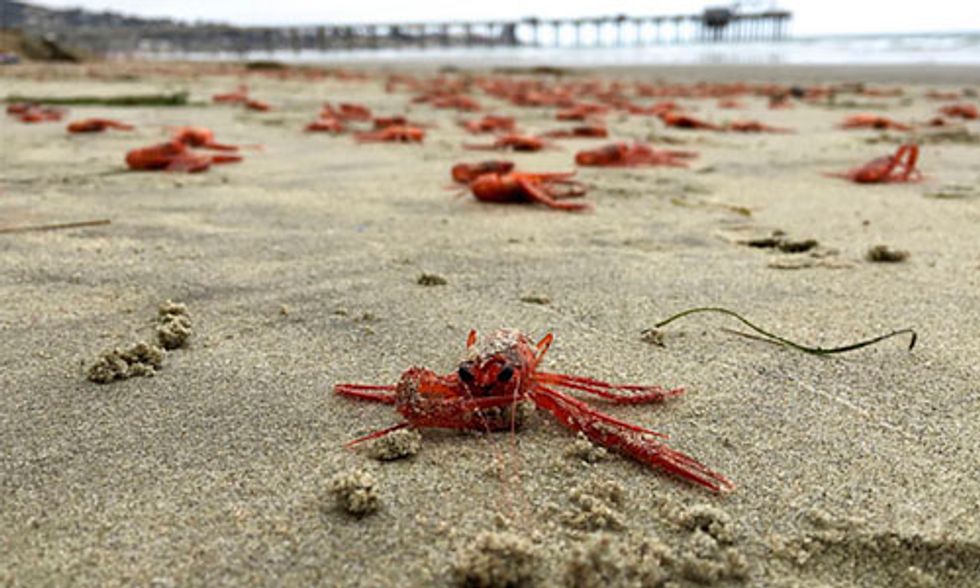 Thousands of red crabs are covering parts of California's coastline. But this isn't the first time.

Masses of pelagic red crab, also known as tuna crab, have been washing up on California's beaches for the last 15 years, reported NBC News. However, every year, the event draws major attention from tourists and residents alike. This year, the crabs are washing up on beaches in Orange County and San Diego.

Despite the name, red crabs are a species of lobster that normally resides off Mexico's western shore, typically moving no farther north than San Diego. But for the past several years, the 1- to 3-inch red crabs have populated waters farther up the coast in California, Reuters reported, and they won't be leaving anytime soon.

This is largely due to El Niño. As the National Aeronautics and Space Administration (NASA) predicted back in December, the U.S. is feeling the effects of El Niño. And it could still get worse, according to NASA: "The current strong El Niño brewing in the Pacific Ocean shows no signs of waning."

El Niño brings warmer water north and expands the crabs' habitat. The California waters that were once inhospitable are now a perfect environment for the crustaceans. Scientists believe the crabs have established a long-term population in this new-found home, Reuters reported.

The crabs spend most of their time swimming freely in the open ocean, and are therefore more susceptible to tides, currents and winds than other crab and lobster species, according to the Scripps Institution of Oceanography in San Diego. Most of the crabs are dead when they wash up on shore. Those that aren't, will perish soon after.

As red crabs are carried to shore by changing currents, beachgoers flock to see the phenomenon.

They have taken to social media to document their experiences. Last year, Donna Kalez, general manager of Dana Wharf Sportfishing and Whale Watching in Dana Point, California, told the Orange County Register, "Everyone is taking selfies with the red crab."

So many crabs are washing up on the California coast it's turning beaches red #ThanksElNiño https://t.co/tAHAe99cKQ https://t.co/yk2VON4JKN
— Gizmodo (@Gizmodo)1463497612.0

"I think it's kind of cool," Kalez said. "It's a phenomenon you won't see for a long time. It's sad they're going to die, but there's nothing you can do."

Scientists are warning residents to not eat the crabs as they may contain unknown toxins.

The crabs that aren't cleaned up will be left to decompose on the beach and re-enter the ocean via waves or be eaten by seabirds who are enjoying the phenomenon as well.

Only 60 Vaquita Left as World's Smallest Porpoise Slides Toward Extinction