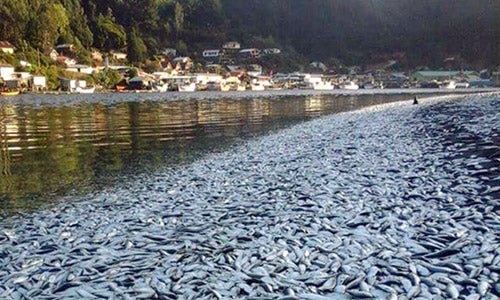 A massive fish kill in the Queule River Estuary in Chile last week has left fishermen overworked, residents in fear and thousands of tons of dead sardines floating along local shorelines. According to a statement on the website Chile’s National Fisheries and Aquaculture Service (SERNAPESCA), the entire area has been declared a human health hazard and the dead sardines have been banned for consumption. 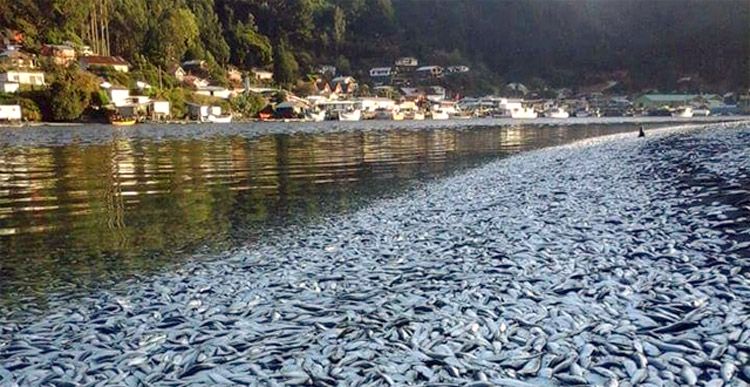 Seven major areas in the estuary have been affected by the sardine die-offs with Playa de Los Piños being hit the hardest. The news comes at a bad time for a region already struggling with stocking its national fisheries. Sardines, along with anchovy, were recently closed to fishing in the country due to low catch numbers. SERNAPESCA estimates that there were several hundred tons of dead fish in the water.

Fisherman Hernan Machua, told El País that 1,000 tons of dead sardines have been scooped out of the water so far and several thousand tons remain. He also added that more help from the government in the clean up efforts was desperately needed.

Last week, SERNAPESCA tweeted images of the massive sardine die-offs. The images were captured during an aerial evaluation of the extent of the fish kill. The evaluation team included the mayor of Queule:

Over the weekend SERNAPESCA tweeted this image of fishermen beginning the removal of the dead fish:

Images publicly posted to Facebook from a Queule resident presented an alternative perspective to the clean up efforts:

At this time it is unclear why the fish kill happened, nor is it clear where it originated. It is also unknown if other fish species have been affected. What is clear is that fluctuations in sardine populations are common and occur for several reasons. One reason is hypoxia. Hypoxia is the result of increased primary production in waterways which leads to a decrease in the availability of oxygen, subsequently suffocating marine organisms. Unfortunately, this is not Chile’s first time dealing with massive fish kills related to hypoxia.

Although sardines are not listed as a threatened species, in a food web, their recent-historic population declines have far reaching implications for animals at higher trophic levels—animals like sea lions. This past March, in the U.S., the National Oceanic and Atmospheric Administration (NOAA) reported that low stocks of sardines and anchovy were to blame for starving sea lion pups. Female sea lions were unable to receive proper nutrition due to the scarcity of their staple food source—sardines and anchovy. Therefore, undernourished females were unable to properly feed their own pups.

The struggle to maintain adequate fish stocks in the Chile was echoed this week by the U.S. when the U.S. Pacific Fishery Management Council closed sardine fishing in the Pacific Northwest. This is the second consecutive year that the council has taken this action. Both countries face tremendous obstacles rebuilding their national fisheries. Among those obstacles are overfishing, water pollution and climate change.

Residents in Queule are frustrated with authorities for the slow pace of the clean up, according to Reuters. Health concerns have also been raised as the decomposing fish continue to crowd the shoreline. Euronews reported that a similar incident occurred in the neighboring region of Los Rios last month, but that report is not yet confirmed.

Clean up efforts are ongoing and the environmental impacts are unknown.