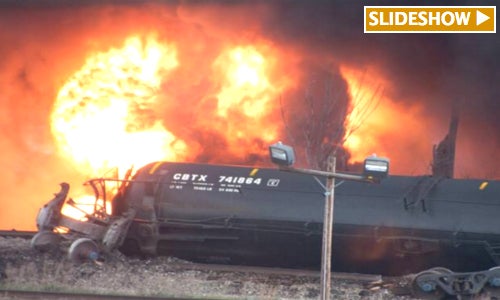 Thick smoke covered a Virginia town Wednesday after a CSX train derailed and thousands of gallons of crude oil spilled into the James River.

The City Of Lynchburg said that the train was carrying crude oil and three or four of its 13 cars were destroyed.

“There is some spillage in the river of crude oil,” Lynchburg city spokeswoman LuAnn Hunt told the Richmond Times-Dispatch.

ABC 13 in Lynchburg reported that at least 50,000 gallons of the oil that heading to Yorktown, VA went missing.

City officials planned on tapping an alternative drinking water supply, but later announced on Facebook that the water supply would not be impacted. Still, residents around the metropolis were evacuated with some leaving their cars in the area of the train. Streets around the downtown area were closed.

The National Transportation Safety Board announced that it is investigating the cause of the derailment. There were no reported deaths or injuries

“It’s difficult to get Virginia to pay attention to this because they don’t think of their being part of the oil patch, but now they are,” Fred Millar, a hazardous materials safety consultant, said.

“Virginia is being used as a transportation corridor only,” Millar said. “We get all of the risks and no benefits.”

Just a week ago, National Transportation Safety Board Chairman Deborah Hersman spoke about the dangers of transporting hazardous materials without strong regulations.

“We are very clear that this issue needs to be acted on very quickly,” she told reporters last week.