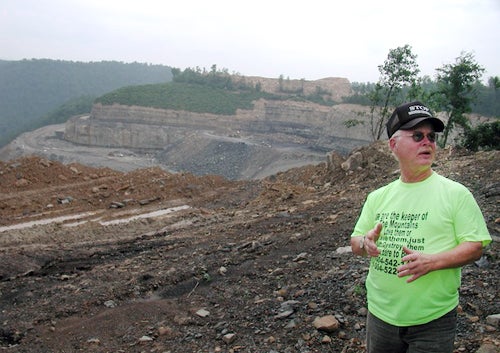 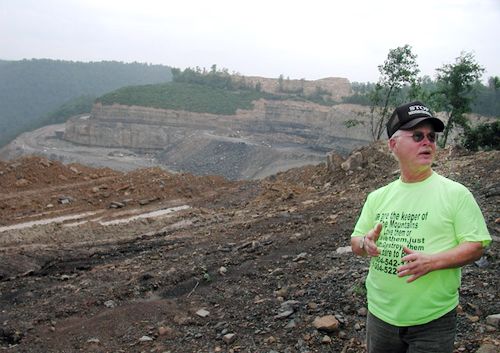 More than four years ago, decked out in his trademark yellow cap and shirt, Larry Gibson famously waited his turn at a political rally in Beckley, West Virginia, and finally got the chance to ask then-presidential candidate Barack Obama whether he would defend the land and people of central Appalachia.

Few people in our country were so fearless in the face of political pressure, bankers, Big Coal backlash and even death threats; and fewer people had the inspiring impact of this determined mountaineer, who had spent the last two decades crisscrossing the country, leading protests and beseeching power brokers to defend his Appalachian mountains from reckless strip mining operations.

His message was simple and to the point: Love them or leave them, just don’t destroy them.

Yesterday, working on his beloved Kayford Mountain homeplace—the symbolic sky island surrounded by nearly 8,000 acres of mountaintop removal devastation that has served as an important training ground for a generation of activists, educators and chroniclers—66-year-old Larry Gibson reportedly died from a heart attack, as committed as ever as one of the most indefatigable, cherished and courageous spokespeople in the movement to abolish mountaintop removal mining.

And still waiting for Washington, DC to end to one of the most egregious human rights and environmental crimes in the nation.

And still waiting for an uprising in the hills of Appalachia, and the halls of Congress and the White House to join him on the frontlines of social justice.

“I never wanted to become an activist, but I had to,” Gibson told interviewer Taylor Lee Kirkland in 2009. “If I hadn’t I would have been torn off this mountain a long time ago. There are thousands of people around the world who have heard me speak since I started this work, but honestly I wish to God no one knew my name. I wish I didn’t have to leave my home and talk to people about mountaintop removal. Last year I traveled eight months out of the year talking to people about this stuff. But I know I have to bring this message to the world and I’m gonna fight for justice in every way I can. We have to have an uprising. This isn’t an uprising that can be bought with money, but one that’s coming from the hearts of honest and hardworking people.”

As the news of Gibson’s tragic loss spreads tonight, thousands of students, educators, activists, Washington wonks and policy analysts, and journalists and filmmakers from around the nation and world continue to release statements and post photos of how one mountaineer changed their lives in his pursuit for justice on Kayford Mountain, and his patience in greeting everyone at this homeplace.

“I spent the day with Larry on Thursday,” acclaimed photographer Paul Corbit Brown emailed me. “To say he had an enormous impact on all of our lives wouldn’t be enough. To say he was a hero wouldn’t be enough. To say he changed our lives wouldn’t be enough. To say has was deeply loved and will be missed wouldn’t be enough. But let me tell you what was on his heart just days ago. He stressed that this fight was never about him or his mountain alone. It was, and is, about all of us and our shared future. It is about the thousands of young people that he called his kids. It is about those not yet born. It wasn’t about Larry Gibson and a mountain. He wanted to be a voice for all people and the mountains and homes they love. He wanted to speak for Justice and to inspire those too frightened to speak. And even those who called Larry an enemy and wished to do him harm, he spoke of them, still, as “his People.” Rest in Peace, Larry. It was only appropriate that you should be on your mountain when you left this world. You can rest assured that we who you left behind will not rest until we finish the work you so passionately and courageously began.”

“Larry was one of the strongest, kindest, most dedicated peaceful warriors for justice I’ve ever known in my life,” said Rory McIlmoil, a West Virginia-based coal and clean energy analyst. “And that no matter who you were, or which side you were on, Larry’s smile, his laugh, and his compassion would remind you that we’re all human and that we should care and fight for each other. I’m definitely going to miss Larry Gibson.”

“The world is better for all Larry did to try to ensure a future hope for besieged and blasted generations of Appalachia,” said Bob Kincaid, president of the Coal River Mountain Watch board. “At Kayford Mountain, he was among the first to show the world the ravages of Mountaintop Removal, making real and immediate and undeniable the coal industry’s most dirty secret. Where I’m sure he is, I know the waters run clear and cool, and the air is no longer choked with dust, and Larry smiles in leisure well-earned.”

“For those who love mountains, Larry was a god,” wrote Rob Perks, with the Natural Resources Defense Council in Washington, DC. “There was no one like him, a man who literally put his life on the line to keep the coal industry from stealing our shared legacy. His spirit will live on in our continued fight to end The travesty of mountaintop removal.”

“Larry’s endlessly inspiring efforts and words are exemplary of a true hero,” noted Chelsea Marie Ritter-Soronen, a St. Louis-based artist who took part in Mountain Justice and direct action protests in West Virginia. “Like many, I’ll never forget the first time I heard him speak about mountaintop removal, it simply changed my life.”

“I’m heartbroken to hear about the passing of Larry Gibson,” said Scott Parkin, with Rainforest Action Network. “He was an uncompromising force, a relentless voice that spoke truth to power and put his body on the line. Every time I saw him speak, he moved the audience to tears and then to action. Once you learned about his story and his fight against mountaintop removal, you were hooked. You wanted to move to West Virginia and join him. He recently told a crowd in Charlotte, NC “They tell us we’re collateral damage, well I ain’t collateral damage. I am somebody. My name is Larry Gibson.” Now we’re all Larry Gibson.”