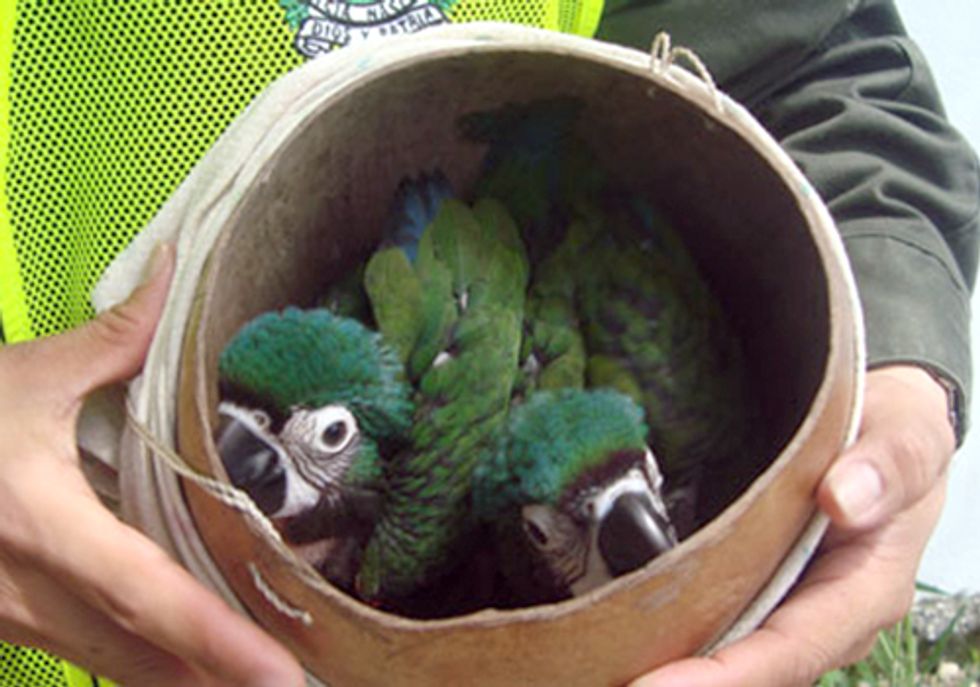 More than 8,700 birds and other animals have been seized and nearly 4,000 people arrested in a global crackdown on the black market trade in Latin American birds, according to INTERPOL. Operation Cage targeted illegal bird and egg sales in Central and South America and Europe.

Between April and June of 2012, authorities seized not only thousands of live birds, but turtles, fish, mammals and elephant ivory. The raids and arrests took place at ports, airports, open-air markets, pet stores and taxidermy shops. Along with the birds and other animals, authorities seized trapping equipment, guns and ammunition.

Operation Cage was launched in response to the growing illegal trans-border trade of captive-bred and wild birds and eggs, and the increasing involvement of organized crime networks in their transit from Latin America to Europe.

The global black market for exotic birds is a multi-billion-dollar business that has had a big impact on bird populations in Central and South America. According to the International Union for the Conservation of Nature (IUCN), roughly 100 of the world’s 350 parrot species are now threatened with extinction by illegal seizure for trade and habitat loss.

“Operation Cage once again clearly demonstrates the global scale of the problem of the illegal trade in birds and other wildlife, which is not just an organized crime issue, but also represents a biosecurity risk,” said David Higgins, manager of INTERPOL’s Environmental Crime Programme.

Birds raised in captivity and sold on the black market often carry diseases that can pose a threat to other birds and people.

“The criminals involved in this illicit trade have no concern for the welfare of these birds and animals, [or] that many of the species being trafficked are endangered. The only concern they have is [for] the profits they can make,” Higgins said.

“The capture and illicit trade of birds has particularly impacted threatened birds because their rarity yields higher demand and higher black market prices for the trappers and traders. In addition to the impact of collecting on wild populations, the illegal trade causes tremendous suffering to individual birds, with many dying during transportation,” said Dr. George Fenwick, president of American Bird Conservancy, the only organization exclusively conserving birds throughout the Americas.

Supported by the United Kingdom Department for Environment, Food, and Rural Affairs, and Environment Canada, Operation Cage was coordinated by INTERPOL’s Environmental Crime Programme unit at the General Secretariat headquarters in Lyon.

Results are still being gathered and will be used to collate and analyse intelligence for future interventions.