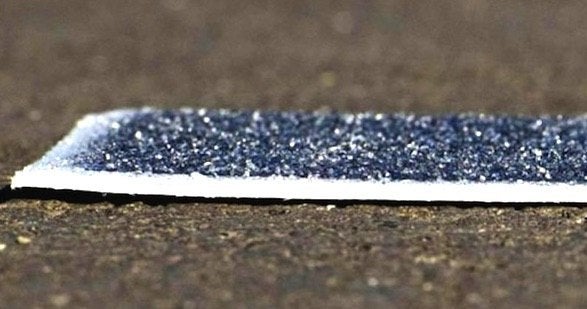 The French government plans to pave 1,000 kilometers (621 miles) of its roads with solar panels in the next five years, which will supply power to millions of people.

“The maximum effect of the program, if successful, could be to furnish 5 million people with electricity, or about 8 percent of the French population,” Ségolène Royal, France’s minister of ecology and energy, said according to Global Construction Review.

France’s Agency of Environment and Energy Management said that 4 meters (14 feet) of solarized road would be enough to supply the electrical needs of one household, excluding heat. One kilometer (0.62 miles) will supply enough electricity for 5,000 residents.

The project is the result of five years of research between French road construction company Colas and the French National Institute of Solar Energy.

The project, “Wattway,” was introduced last October. The technology consists of extremely thin (7 millimeters) yet durable panels of polycrystalline silicon that can transform solar energy into electricity. The panels are also said to be 15 centimeters wide and heavy-duty skid resistant to reduce auto accidents.

“These extremely fragile photovoltaic cells are coated in a multilayer substrate composed of resins and polymers, translucent enough to allow sunlight to pass through, and resistant enough to withstand truck traffic,” Colas said in a press release.

The panels are rainproof and have passed snowplow tests “with flying colors,” according to the Wattway FAQ page. The company also boasts that their panels can last as long as conventional pavement, or 10 years depending on the traffic. Wattway panels can last roughly 20 years if the section is not heavily trafficked, such as stadium parking lot.

In terms of efficiency, Wattway said its panels have a 15 percent yield, compared to 18-19 percent for conventional photovoltaic panels.

Although there are detractors, solar roadways have been touted as an excellent way to harness the sun’s energy. “Roads spend 90 percent of their time just looking up into the sky. When the sun shines, they are of course exposed to its rays,” Jean-Lic Gautier, manager of the Center for Expertise at the Colas Campus for Science and Techniques, said in a press release. “It’s an ideal surface area for energy applications.”

The panels will be applied directly to existing roads in France. “There is no need to rebuild infrastructure,” Colas CEO Hervé Le Bouc told Les Echoes last year. “At Chambéry and Grenoble, was tested successfully on Wattway a cycle of 1 million vehicles, or 20 years of normal traffic a road, and the surface does not move.”

Minister Royal said installation of the panels will begin this spring and proposes to pay for them by raising taxes on fossil fuels, Gas2.org reported.

She said it was “natural” to raise taxes on fossil fuels given that the cost of oil is currently so low, adding that new taxes would contribute between 200-300 million Euros ($220-440 million) to the Positive Energy initiative.

Learn more about the solar road project in this video: