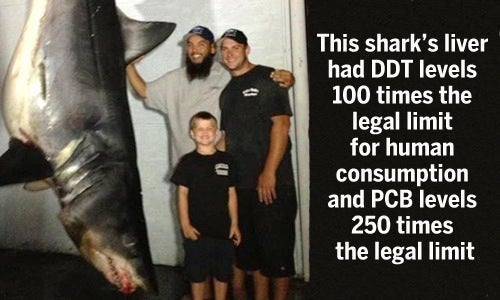 A 1,300-pound shark caught off the coast of Southern California is a sad reminder of what is a well-documented fact: our oceans and their inhabitants are incredibly contaminated. The shark was caught for a reality TV show off Huntington Beach in Newport Beach. At the time it was caught in 2013, it was believed to be the largest mako shark ever captured.

It has since been donated to scientists at the National Oceanic and Atmospheric Administration (NOAA), who recently published a paper in The Journal of Fish Biology, finding that the shark had extremely high levels of DDT, PCBs and mercury. “I wouldn’t eat that,” Kady Lyons, the study’s lead author, told the Orange County Register. “It’s definitely something you would not want to eat if you were planning on having children because it has reproductive consequences.”

The cause of the high toxins was the shark’s old age and top-predator status, coupled with the widespread presence of decades-old DDT and PCBs in the waters of coastal Southern California. Both DDT, a pesticide, and PCB, a manufacturing material, were banned in the 1970s because of their toxicity.

Hundreds of tons of DDT entered the waters off the Palos Verdes Peninsula between the 1940s and 1980s, discharged by a now-defunct chemical plant. That DDT has since spread across coastal Southern California.

The NOAA scientists tested the shark’s liver and found DDT levels were 100 times the legal limit for human consumption and PCB levels were 250 times the legal limit. Its mercury levels were 45 times greater than the limit for women of childbearing age and children, and 15 times greater than limits for women over 45 and men. Dangerous toxins like PCB, DDT and mercury bioaccumulate as they work their way up the food chain, which is why sharks like this one can become so toxic.

While shark is not a common menu item in restaurants or stores in the U.S., it is consumed in other parts of the world, most notably as shark fin soup. It’s estimated that 100 million sharks are killed every year to make shark fin soup.

The waters off the coast of Southern California are so toxic from decades of contamination that officials advise against eating other top predators such as white croaker, barracuda, topsmelt, black croaker and barred sand bass “caught off piers between Santa Monica Bay and Seal Beach, and recommend against eating more than one fish per week caught from piers elsewhere in Southern California,” according to the Orange County Register.

The seafloor of the Palos Verdes Peninsula has been declared a Superfund site and scientists estimate there are at least 14 tons of DDT on the ocean floor.

Wondering what other seafood you shouldn’t be eating? Check out this article.