This Self-Sustaining Island Paradise Is Something to See 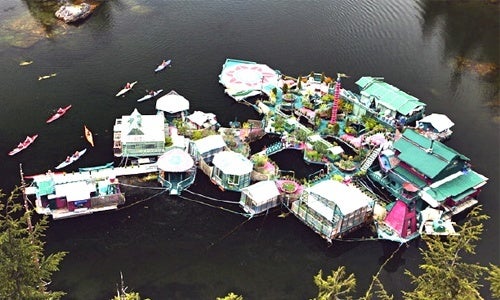 Tucked away in a coastal inlet about a half-hour boat ride from Tofino, British Columbia is a floating off-grid utopia that’s home to artists Wayne Adams and Catherine King, who have truly managed to get away from it all. 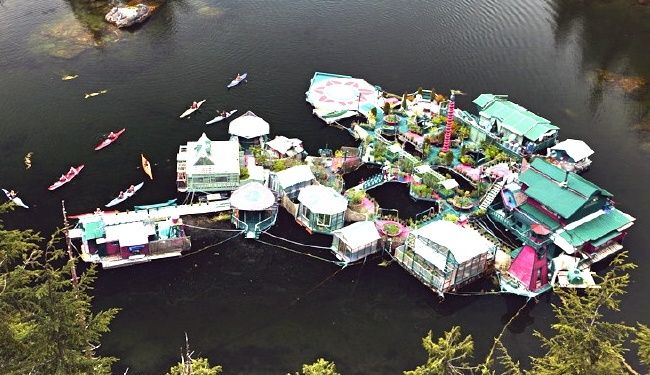 The turquoise and magenta wonderland, aptly called Freedom Cove, is completely self-sustaining. Energy comes from a small Honda generator (its solar panels recently broke down), drinking water comes from rain and a nearby waterfall, and food can be plucked from five greenhouses or from a half-acre garden or caught fresh from the sea.

The twelve-platform structure, which moves around with the water currents, is all tethered together and connected with wooden pathways. While it was built in 1992, this Cypress Bay home has been constantly changing. In addition to the studio where the owners live, they’ve also added a dance floor, an art gallery and a lighthouse tower for guests.

There also used to be a hen house but, according to Collective Evolution, there were too many predators so the couple decided to ditch raising livestock. The property is comprised of twelve floating platforms and has many different structures, including a lighthouse for guests.

The complex is like a living art project for its artistic residents. Adams is a carver and builder, and King is a painter, writer and dancer. The two also sell their carvings and candles in the nearby towns.

The couple, who have been married for nearly three decades and have two children, have lived on their island paradise year-round since 1992. It appears that Freedom Cove was their way of getting away from their former busy lives.

Like an ongoing art project, the complex is constantly changing and suits the owners’ artistic and environmentally conscious sensibilities.

“We have both done so many things in our lives and we’ve had hard times, so we were well prepared for how different the lifestyle would be out here,” Adams told Huffington Post B.C. “It fits us.”

The coolest part? You can actually visit Freedom Cove through a boat cruise or via kayak. Take a look at the amazing site in the video below.