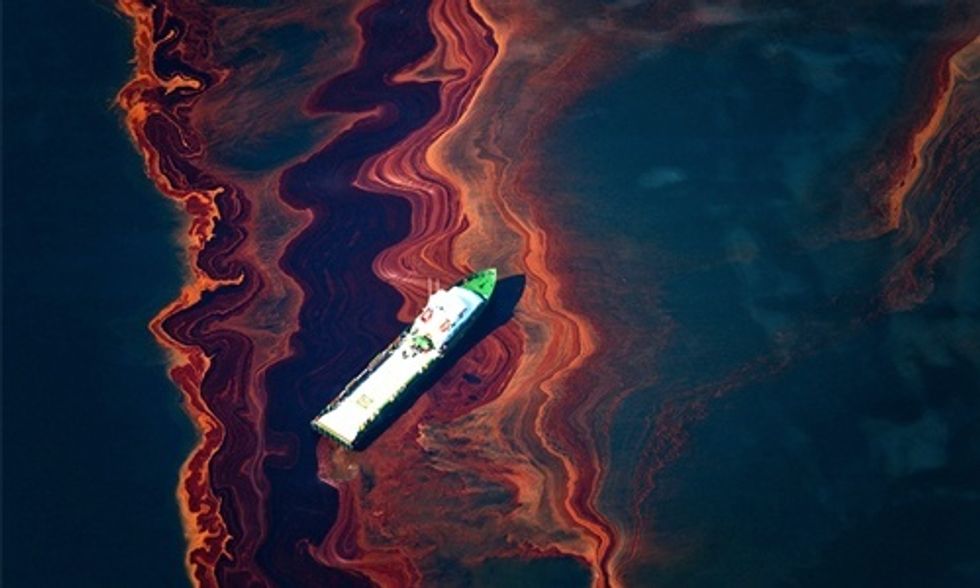 Despite demand for cleaner sources of energy, the increase in affordable renewable options and the climate agreement reached last year in Paris, the oil industry’s thirst for more is not dead yet—nor is the threat it poses to our coastal waters and communities.

Why open these irreplaceable areas for dirty oil production if renewable energy is already offering viable and sustainable options? Why continue leasing public resources for exploitation if we know that their use would put our communities at extreme risk?

The Deepwater Horizon blowout spewed about 200,000 gallons of crude oil per day from the broken pipeline into the Gulf of Mexico. Six years later, the Obama administration is considering expanding the offshore oil program to the Atlantic. Photo credit: Daniel Beltrá / Greenpeace

The answer is as frustrating as the questions themselves. Even at a time when oil exploration makes less environmental and economic sense than ever, the U.S. Bureau of Ocean Energy Management (BOEM)—mandated by the Outer Continental Shelf Lands Act (OCSLA) — is preparing the next Outer Continental Shelf Oil and Gas Leasing Program.

In plain English, the Obama administration—the same one that has repeatedly positioned itself as a leader on climate change—is laying out plans to lease offshore oil to the usual suspects like Exxon, Shell, Chevron and others in the coming years.

How Can That Be?

The OCSLA established a program in which the waters of the U.S. outer continental shelf are leased in five year windows, known as the five-year plan. The next five-year window is set to begin in 2017. For it to start on time, the plan has to be delivered by BOEM in 2016.

The western and central Gulf of Mexico has historically been the major region for federal offshore oil, with most of the rest of the outer continental shelf under congressional moratorium. But in 2008, President Bush removed almost all restrictions in the waning hours of his administration.

President Obama put many of those restrictions back in place, but left open the possibility of Arctic, Atlantic and new Gulf lease sales. The tragic Deepwater Horizon disaster in 2010 compelled President Obama to put a pause on many of these new areas, but now that some time has passed—not that drilling has become any safer—he seems to think it’s ok to re-open the Atlantic to the oil industry.

If you think that sounds contradictory to the president’s lofty rhetoric on climate change in recent months—you’re right. And although President Obama has made some promising moves by protecting all of Bristol Bay, Alaska from leasing and canceling lease sales across the U.S. Arctic, he’s falling short of true climate leadership.

What’s in the Five-Year Program?

A preliminary draft of the five-year program presented last year contained measures fundamentally incompatible with action on climate change. The plans include leasing 90 percent of the U.S. Arctic, including areas that Shell Oil abandoned after millions of people around the world united to stop them. Even though Shell is out, the new plan could reverse this progress and re-open these areas for drilling.

As if the Arctic weren’t enough, it would also open the southeast Atlantic coast—untouched for more than three decades—to oil drilling activity off of Virginia, North Carolina, South Carolina and Georgia.

And the Gulf of Mexico would see no reprieve from offshore drilling, even as it is still reeling from the impacts of the Deepwater Horizon blowout.

By opening these new areas in the Atlantic to leasing—not to mention leaving the Gulf and the Arctic open to continued exploitation—through the five-year program, the Obama administration is setting the table for the next president to expand oil exploration beyond what we already see today.

That’s not climate leadership and it’s not going to help President Obama further the legacy he’s worked hard to build on climate change.

Fight With Us to Keep It in the Ground—And Underwater

But these potentially devastating plans are far from a done deal.

We have an opportunity to put a stop to this together.

The five-year program is still in draft and in the following weeks, the administration will present a new version and open it for comments. When it does, we need to be loud and clear: keep our fossil fuels in the ground—or in this case, in the seabed.