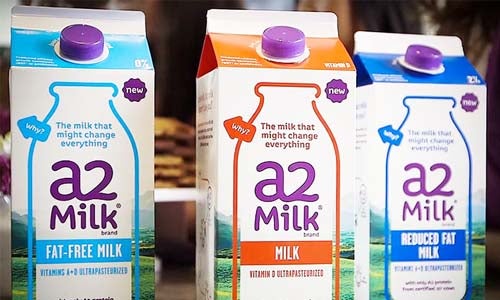 The latest buzz in dairy circles is generated not by the raw versus pasteurized milk controversy—although the risks of raw milk continue to pop up in the news—but by A2 milk. 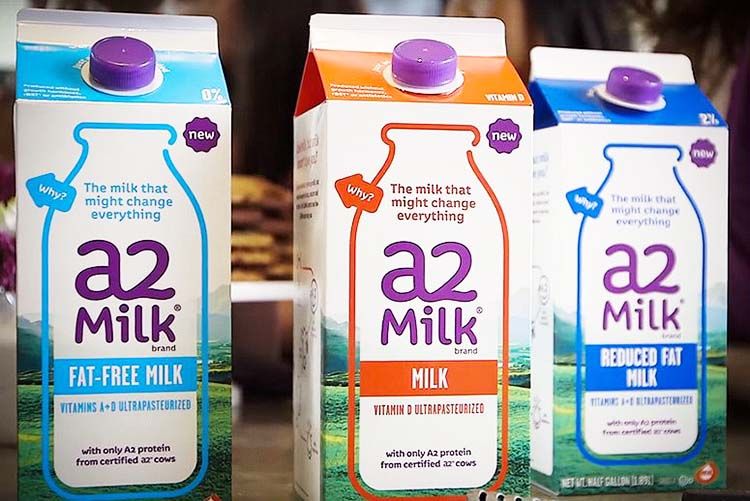 Cartons of A2 milk by “The A2 Milk Company” brand. Photo credit: YouTube

The milk and other dairy products—which producers claim are more easily digested than the majority of commercially produced milk—may be new to the market in the U.S., but what sets them apart from your standard half-gallon is ancient history. Before we get into the various health claims swirling around the products, which range from A2 milk saving you from indigestion to A2 milk saving you from cancer, let’s be clear on what A2 milk is.

Here’s the deal. Cow milk is about 87 percent water. The remaining 13 percent is the complex mixture of lactose, fat, minerals and protein known as milk solids. The primary component of the protein in milk solids is casein, which is involved in the coagulation of milk. Any cheese maker or dairy chemist will tell you that casein is an incredibly complicated substance and there’s still lots to learn about it. One thing they do know, though, is that about 30 percent of it is what’s called beta casein. The two most common variants of the beta-casein gene are A1 and A2. Even though they differ by just one amino acid, the small difference can result in the variants having different properties. Chemistry is so cool.

Anyway, in milk, A2 is often referred to as the “original” protein, because that was the only type produced by early domesticated cows. (Humans and goats also produce only A2). But then, around 10,000 years ago, a natural mutation occurred in some dairy cows in Europe, after which they produced a1 beta casein.

This will all be over soon, so stay with me.

The a1 mutation “occurred primarily in the large breeds such as Holsteins, which produce considerably more milk than other breeds,” wrote Cookson Beecher in Food Safety News last year. “These heavy-producing breeds were quickly adopted by dairies in Europe and the U.S. and, as a result, just about all the regular milk sold today in U.S. stores and in much of Europe contains only the a1 protein, while others produce both the A1 and A2 proteins.” That said, according to Progressive Dairyman, about 40 percent of the Holstein sires in active a1 lineups are among those bulls with two copies of the A2 gene and more than 80 percent of Holstein sires have at least one copy of the A2 gene. Hold that thought.

So, just to recap: A2 milk comes just from cows having two copies of the A2 gene for beta casein. Guernsey, Jersey, Swiss Normande and most African and Indian cattle breeds typically produce A2 milk. (After galloping through a number of A2 milk threads, let me clarify one point: The venerable Jersey breed was developed on Jersey, in the Channel Islands, not New Jersey).

Proponents of A2 milk—including New Zealand dairy science Prof. Keith Woodford, author of the 2007 book Devil in the Milk: Illness, Health and the Politics of a1 and A2 Milk—claim that it’s easier to digest and that A1 milk is linked to a range of illnesses and conditions, ranging from diarrhea, nausea, mucus buildup and bloating to eczema, type I diabetes, coronary heart disease, autism and schizophrenia.

Those that take a more skeptical view note that most of the research (as well as heavy marketing and in-store demos) has been done by—wait for it—The A2 Milk Company, founded in New Zealand by Dr. Corran McLachlan in 2000.

“While studying at Cambridge University, Corrie learned that proteins in milk affect people differently. He learned that ordinary cows produce milk with different beta-casein proteins, called A1 and A2 (among others),” explains the website. “What was amazing? People who had discomfort when drinking ordinary cows’ milk were able to enjoy A2 Milk™ without the same downsides because it contains only the A2 protein and no A1.”

You can guess what’s coming next.

“Market stock has tripled to NZ$1.2 billion in the past year,” wrote Emma O’Brien for Bloomberg Business on Feb. 29. “The point of difference is that A2 Milk products are sourced from dairy cows that produce only the A2 type of beta-casein protein, whereas most dairy contains both A2 and a1. Sales of the company’s a1-free fresh milk, milk powder, ice cream and other dairy goods drove an 80-fold increase in first-half profit and enabled A2 Milk to fund a foray into China’s booming $19.9 billion market for infant formula.”

While A2 Milk has been a commonly available brand in Australia and New Zealand for some years, it only entered the U.S. marketplace, specifically in California stores, in the spring of 2015. According to a Farm Journal AgWeb post from last May, the company developed a proprietary genetic test (ka-ching!) to identify A2 cows so the milk can be segregated for its supply chain and the search was soon on for A2 herds in this country.

According to Bloomberg, the company sources its American milk from four U.S. dairies, mostly in Nebraska and sells to stores owned by Whole Foods, Sprouts Farmers Market, Albertsons and Kroger. The opportunities for small, nimble niche dairies are promising and Holstein breeders have already started to select for the trait.

If by any chance you have gotten this far, you want me to shut up and tell you the benefits of A2 milk.

Well, when it comes to the heavy hitters—diabetes and heart disease—a 2005 review in the European Journal of Clinical Nutrition concluded that there is “no convincing or even probable evidence” that the a1 beta casein of cows’ milk could lead to type I diabetes (DM-1) or a risk factor for coronary heart disease (CHD). “The animal experiments with diabetes-prone rodents that supported the hypothesis about diabetes were not confirmed by larger, better standardized multicentre experiments. The single animal experiment supporting an a1 beta-casein and CHD link was small, short, in an unsuitable animal model and had other design weaknesses.”

And when it comes to lactose intolerance, because A2 milk contains the same amount of lactose (which is not a protein but a milk sugar) as a1 milk does, in medically diagnosed cases of lactose intolerance, A2 milk will not provide the benefits that lactose-free milk or alternative plant-based milks offer. Since much lactose intolerance is self-diagnosed, however, the cause of digestive troubles in those cases may be connected with an aversion to a1, not lactose and so drinking A2 milk may help prevent the discomfort experienced from drinking regular milk.

But the jury is still out and, realistically, will be for some time. In a blind randomized cross-over pilot study published in the European Journal of Clinical Nutrition in 2014, “preliminary results suggest differences in gastrointestinal responses in some adult humans consuming milk containing beta-casein of either the A1 or the A2 beta-casein type, but require confirmation in a larger study of participants with perceived intolerance to ordinary a1 beta-casein-containing milk.” The study was co-authored by Keith Woodford and supported by a grant from A2 Dairy Products Australia. The company also supplied the milk but had no role in the data analysis.

Remember how I said this stuff is complicated?

Why You Should Avoid Splenda

14 Simple Ways to Stick to a Healthy Diet