This Climate Solution Could Cool the Planet and Feed the World 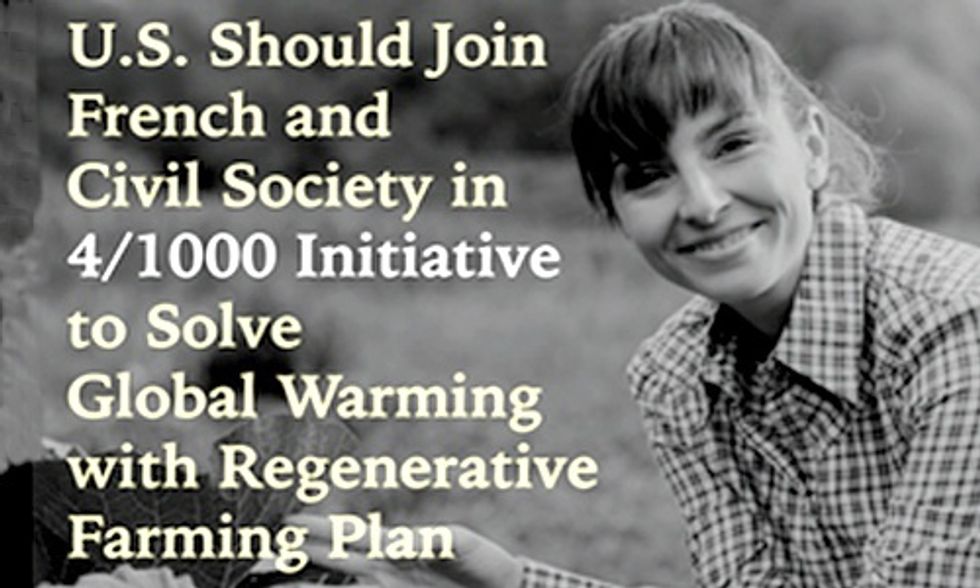 While the world focused on a deal to reduce emissions, another international initiative was quietly signed at the Paris climate conference, highlighting a critical but little known climate solution: soil.

In the first few days of COP21, in a standing-room-only crowd of 300+ delegates, French Minister of Agriculture Stéphane Le Foll championed the signing of a visionary initiative to increase the organic carbon level of agricultural soils by 0.4 percent each year.

According to the signatories from more than 25 countries—including France, Australia, Mexico, Germany and Japan—and hundreds of food, agriculture and research organizations, regenerative agricultural practices that store excess carbon in the soil have the potential to cool the planet and feed the world.

The 4/1000 Initiative: Soils for Food Security and Climate, consists of a voluntary action plan under the Lima-Paris Action Agenda (LPAA), backed up by an ambitious research program. It aims to show that food security and combating climate change are complementary. It also positions our farmers as the pioneering climate heroes of our generation.

“The conclusion is simple,” said Le Foll in a statement at COP21. “If we can store the equivalent of 4 per 1000 (tons of carbon) in farmland soils, we are capable of storing all man-made emissions on the planet today.”

“This is the most exciting news to come out of COP21,” said Andre Leu, president of IFOAM—Organics International. “By launching this initiative, the French government has validated the work of scientists, farmers and ranchers who have demonstrated the power of organic regenerative agriculture to restore the soil’s natural ability to draw down and sequester carbon.”

While soil was not on the official agenda at the climate conference in Paris, the representatives from an informal coalition of soil organizations brought the topic to the masses at a number of panels and side events, and from the Eiffel Tower itself.

“We’re spreading the ‘aha’ moment of our lifetime,” says Ryland Engelhart, chief inspiration officer behind the Los Angeles vegan restaurants Café Gratitude and Gracias Madre and co-Founder of California nonprofit Kiss The Ground. “Healthy soil is a solution right under our feet.” Kiss The Ground’s short film, The Soil Story, which explains how soil can balance the climate, was depicted in lights during the Paris climate summit.

The United Nations Framework Convention on Climate Change‎ (UNFCCC) reports that even a small increase in carbon in our agricultural soils (notably grasslands, pastures and forest soils), is “crucial to contribute to achieving the long-term objective of limiting the global temperature increase to +2°C (+3.6°F).”

“Balancing the carbon cycle through regenerative agriculture practices is a viable and affordable solution to climate change,” according to Finian Makepeace, policy director of Kiss The Ground. “The way we grow our food can restore ecology and create abundant food sources, if we work with nature instead of against it.”

The Center for Food Safety explains the simple farming techniques being used today, such as crop diversity, rotation, composting and cover crops, which are key components in adding carbon to the land to make it more productive. “Covered fields keep carbon, nitrogen and other vital nutrients in soil, resulting in far more photosynthesis than bare fields, increasing carbon sequestration, and lowering the overall carbon footprint of farming,” the organization said.

While the recently signed UNFCCC Paris agreement for emissions reduction is a huge and important step, it’s only half of the solution. Even if we stopped all greenhouse emissions today, per the latest statement from the Intergovernmental Panel on Climate Change, climate change is irreversible “except in the case of a large net removal of CO2 from the atmosphere over a sustained period.”

That is, there is no way to reverse CO2 increases that are already locked in unless we also draw down atmospheric carbon.

California Department of Food and Agriculture Secretary Karen Ross agrees. “Healthy soils are critical not only for global food production but also for sustainability in a changing climate.”

While the U.S. was notably absent from the room, the State of California is working on pioneering initiatives, adding agriculture to its climate change goals and with the launch of Gov. Brown’s Healthy Soils Initiative.

2015 is also the UN International Year of Soils.